FILE PHOTO: The ticker symbol for Fitbit is displayed at the post where it is traded on the floor of the New York Stock Exchange (NYSE) February 23, 2016. REUTERS/Brendan McDermid -/File Photo

(Reuters) – Wearable device maker Fitbit Inc has been in talks with an investment bank about the possibility of exploring a sale amid challenges in successfully pivoting from fitness trackers to smartwatches, people familiar with the matter said on Friday.

Fitbit has struggled to gain a foothold in the smartwatch category, as Apple Inc and Samsung Electronics Co have cornered a bigger share of the market with more sophisticated devices.

At the same time, Fitbit’s dominant share of the fitness tracking sector continues to be chipped away by cheaper offerings from companies such as China’s Huawei Technologies Co Ltd and Xiaomi Corp.

Fitbit has held discussions with investment bank Qatalyst Partners about whether it should engage with potential acquirers, the sources said.

Fitbit has not yet decided to pursue a sale and there is no certainty it will do so, the sources said. Qatalyst has been seeking to persuade Fitbit to explore its options for several weeks, arguing it could attract acquisition interest from Google owner Alphabet Inc as well as private equity firms, one of the sources added.

The sources asked not to be identified because the matter is confidential. Fitbit and Alphabet said that it is their policy not to comment on rumors and speculation. Qatalyst did not respond to a request for comment.

Fitbit shares rose 22% to $4.48 on the news, giving the company a market capitalization of more than $1.1 billion.

Fitbit cut its 2019 revenue forecast in July, blaming disappointing sales of its newly-launched cheapest smartwatch Versa Lite. The watch is priced at $160, compared with the $200 the full version sells for. It can track workouts and heart rate, but lack features such as the ability to store music directly.

Fitbit, which helped pioneer the wearable devices craze, has been partnering with health insurers and has been making tuck-in acquisitions in the healthcare market, as part of efforts to diversify its revenue stream.

In August, Fitbit said it had signed a contract with the Singapore government to provide fitness trackers and services in a health program it said could reach up to 1 million users.

Fri Sep 20 , 2019
by Daveda Gruber: On Friday President Trump announced that the U.S. is hitting Iran’s national bank and that he believes sanctions against Iran are working. Tehran is being blamed for the recent attack on Saudi oil facilities and Trump is not ruling out military action if it becomes necessary. Trump […] 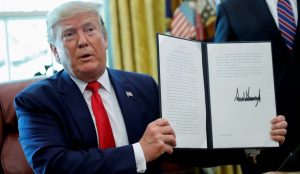