(Reuters) – A more than 5% drop in travel stocks led a slump in European shares on Monday, as the rapid spread of a new strain of the coronavirus forced more stringent curbs in England and a travel ban from many countries.

The pan-European STOXX 600 index tumbled 1.9%, set for its worst session in two months, after UK imposed an effective lockdown and reversed plans to ease curbs over Christmas as the new strain was up to 70% more transmissible than the original.

“This new strain suggests that not only could it be in for a couple of months… (but) could make things far, far worse: more restrictions, more lockdowns like we’re seeing in London now -more of an economic toll.”

Canada, as well as European neighbors Germany, Italy and the Netherlands, ordered a suspension of flights from Britain, while France’s ban also included freight carriers.

Travel and leisure stocks were on course for their worst day in three months, with British Airways owner IAG, carrier Lufthansa and travel company Tui plunging between 5.8% and 9%. Cruise operator Carnival Corp shed 6.4%.

Shell was further weighed down by a $3.5 billion to $4.5 billion writedown in the value of oil and gas assets.

Weighing on sentiment was uncertainty over Brexit trade deal negotiations. With less than two weeks before Britain leaves the European Union’s orbit, neither has budged far enough for a breakthrough.

Worries around the new virus strain also saw investors look past an agreement over a $900 billion fiscal aid package in the United States that will be set to vote on Monday. [MKTS/GLOB]

Vaccines should still be effective against the new strain, scientists said. Britain has already rolled out the Pfizer-BioNtech vaccine, while the European Medicines Agency is set to approve it on Monday, followed by a European Commission nod on Wednesday.

Among sparse gainers were some healthcare and consumer stocks.

(Reporting by Susan Mathew in Bengaluru; editing by Uttaresh.V and Sriraj Kalluvila)

Mon Dec 21 , 2020
Honolulu, Hawaii — The Kilauea volcano on Hawaii’s Big Island erupted Sunday night, the U.S. Geological Survey said. The volcano is in Hawaii Volcanoes National Park and the eruption is in the Halemaumau Crater. The National Weather Service in Honolulu warned of falling ash from the volcano. Excessive exposure to […] 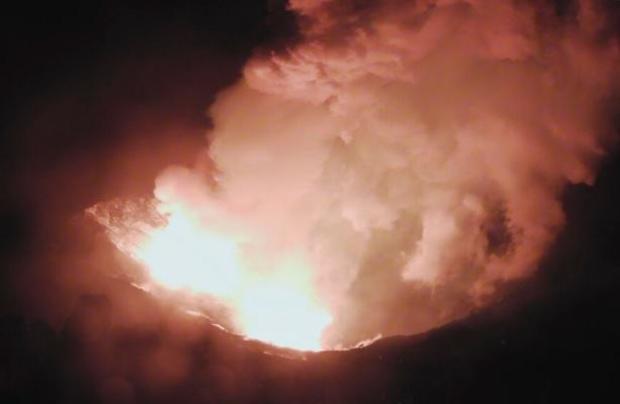