(Reuters) – European shares dipped on Wednesday, after dramatic swings over the past week, as uncertainty over the outcome of London’s last-ditch Brexit talks with Brussels kept investors on the sidelines.

Brexit negotiations will resume in Brussels on Wednesday morning after “constructive” negotiations went into the night on Tuesday, a British spokesman said.

London-listed shares of Rio Tinto <RIO.L> fell after the miner said its iron ore shipments rose 5%, but cut its bauxite and alumina production forecast for the year.

The company’s share drop pulled the mining sector <.SXPP> down 1.3%.

Keeping losses in check for the benchmark index were shares of Roche <ROG.S>, which rose 1.2% as the Swiss drugmaker boosted its 2019 sales outlook for a third time, and said it expects to finish its takeover of Spark Therapeutics <ONCE.O> this year.

Its shares boosted the healthcare sector <.SXDP> by 0.5%.

(Reporting by Medha Singh in Bengaluru; Editing by Bernard Orr)

Wed Oct 16 , 2019
FILE PHOTO: Supporters of Yemen’s southern separatists stand on a billboard during a rally to show support to the United Arab Emirates amid a standoff with the Saudi-backed government, in the port city of Aden, Yemen September 5, 2019. REUTERS/Fawaz Salman/File Photo October 16, 2019 DUBAI (Reuters) – Yemen’s Saudi-backed […] 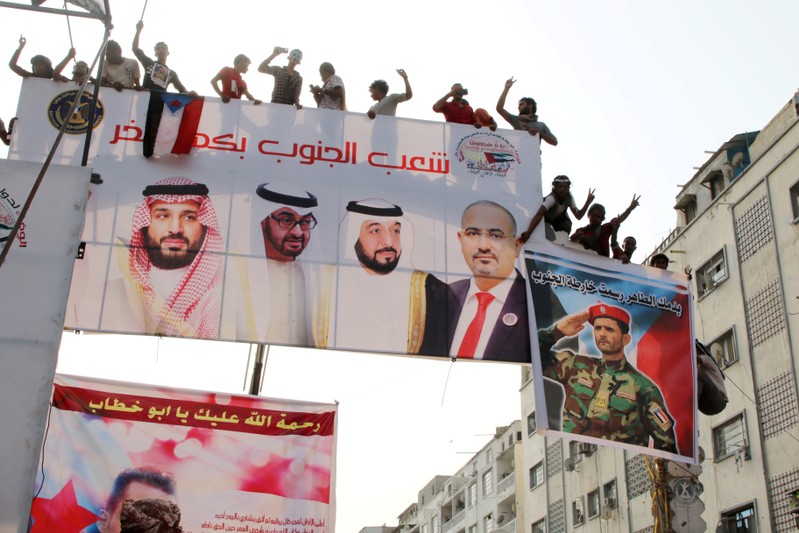