LONDON (Reuters) – European shares were firmly in the red on Tuesday as the optimism about U.S.-China trade talks that swept stocks to fresh October highs cooled, with London’s FTSE 100 lagging the broader markets as the sterling rallied.

The pan-European STOXX 600 was down 0.2 percent by 1002 GMT, in line with France’s CAC 40 and Germany’s trade-sensitive DAX. The index closed at its highest level since Oct. 9 on Monday.

The FTSE 100 was down 1.1 percent to its lowest since Feb. 11 as sterling rallied to one-month highs after reports that Prime Minister Theresa May is considering delaying the March 29 deadline for Britain’s exit from the European Union. An announcement could come as soon as Tuesday.

With the majority of its companies’ income coming from abroad, the FTSE 100 is often pressured by a stronger pound.

Tech, auto and miners, some of the most exposed to the U.S.-China conflict and the biggest gainers on Monday, were among the biggest fallers as enthusiasm over trade talks cooled.

Even though U.S. President Donald Trump said he would delay a tariff hike on $200 billion of Chinese imports in the clearest sign yet that both sides were making progress, he also said a deal had not yet been sealed and there was still a lack of detail on what emerged from the Washington talks.

Chris Gannatti, head of research at WisdomTree, said investors are realizing that a compete deal would still take a while to hammer out.

“On one hand it’s good to have these positive signals, but on the other hand the distance from where we are at this moment to a full deal that’s completely done and fully signed off, it’s not something that would happen in the coming months,” he said.

Among individual moves, British defense contractor Babcock was down more than 6 percent to the bottom of the STOXX 600 after warning that its Brexit restructuring costs would total some 10 million pounds per year.

Denmark’s Jyske Bank was close behind fallers after its results, while Peugeot owner PSA was on track for its worst day since December as dealers said investors locked in profits after the French carmaker’s record results. Slightly weaker-than-expected sales also weighed, they said.

Shares in IAG, which owns British Airways and Iberian Airlines, were down 3.7 percent in London and the biggest decliner on Madrid’s IBEX after index provider MSCI said it planned to delete the stock from its Spain index.

Travis Perkins was a bright spot in the building materials sector after reporting better-than-expected results.

In Germany, BASF topped the DAX after the German chemicals giant delivered slightly better-than-expected profits, even though they plunged nearly 60 percent due to weak results at its petrochemcials unit.

Elsewhere in the sector, British speciality chemicals maker Croda International dropped almost 4 percent after its pre-tax profits missed expectations and the company warned it was stockpiling goods in continental Europe to prepare for Britain’s exit from the bloc.

Tension between nuclear-armed India and Pakistan escalates to airstrikes

Tue Feb 26 , 2019
New Delhi — Indian Air Force jets carried out “pre-emptive” strikes on Pakistani territory on Tuesday, stoking tension between the nuclear-armed neighbors. Pakistan called the attack a “grave aggression” and promised a “timely and effective response” by its own military. India claimed the strikes hit “the biggest training camp” of […] 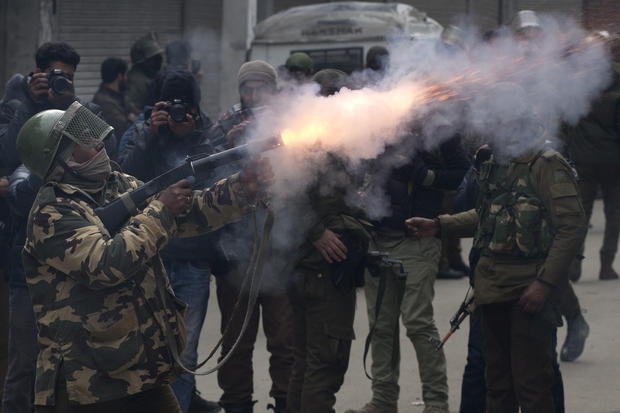