Brussels — Turkey is “heading in the wrong direction” with its incursion into Syria and its deal with Russia to jointly patrol a “safe zone” there, U.S. Defense Secretary Mark Esper warned Thursday.

“Turkey put us all in a very terrible situation” by sweeping into northern Syria this month to fight Kurdish militia members who were allied for years with the U.S. in the fight against ISIS, Esper told a conference in Brussels ahead of a NATO defense ministers’ meeting.

President Trump cleared the way for the Turkish incursion, however, when he ordered the withdrawal of U.S. forces from northern Syria earlier this month. The White House said Mr. Trump had been unable to dissuade Turkey’s leader from launching the offensive — one he had wanted to carry out for years.

On Wednesday, hours after Mr. Trump dropped U.S. sanctions against Ankara for its actions in Syria, Esper said “Turkey’s irresponsible incursion into Northern Syria jeopardizes the gains made there in recent years.”

The onus, he said, was now on Turkey’s NATO allies to “work together to strengthen our partnership with them, and get them on the trend back to being the strong reliable ally of the past.”

The issue of Turkey’s military operation in Syria was set to dominate the two-day NATO meeting, with diplomats in the organization saying “frank” discussions with Ankara’s representatives had already taken place.

Turkey’s subsequent arrangement with Russia to clear Kurdish fighters who Turkey regards as “terrorists” has also raised hackles among NATO allies. Mr. Trump, however, has lauded the ceasefire deal as “a great outcome,” and praised Turkish President Recep Tayyip Erdogan.

“We have done them a great service and we’ve done a great job for all of them, and now we’re getting out,” Mr. Trump said on Wednesday. “Let someone else fight over this long blood-stained sand.”

Mr. Trump claimed those who had criticized his decision to pull American troops out of northern Syria had turned to praising him.

“Today’s announcement (of the Turkish-Russian agreement) validates our course of action with Turkey that only a couple of weeks ago was scorned and now people are saying, ‘wow, what a great outcome, congratulations,'” Mr. Trump said.

While isolated within NATO, Turkey’s strategic position between Europe and the Middle East is seen as too important to jeopardize, so the other alliance members have limited themselves to relatively muted criticism.

Esper defended the Trump administration’s decision to pull U.S. forces out of northern Syria, which Kurdish commanders and residents in the area have called a betrayal.

“The U.S. decision to withdraw less than 50 soldiers from the zone of attack was made after it was made very clear to us that President Erdogan made the decision to come across the border,” he said, adding that he would not “jeopardize the lives of those servicemen” nor “start a fight with a NATO ally.”

He acknowledged “there has been some criticism” about the U.S. withdrawal “but nobody’s yet offered a better alternative to what the United States did. We are trying to keep a very strategic perspective.”

In total about 1,000 American forces are in the process of withdrawing from northern Syria into Iraq, but at least 200 were expected to remain in the country, in spite of two orders from Mr. Trump for a complete withdrawal, to help protect oil infrastructure from ISIS attack.

It was still unclear on Thursday exactly where the U.S. troops being relocated to Iraq will go next, but Iraq said on Wednesday they could only remain in the country for a month. Defense Minister Najah al-Shammari told The Associated Press after meeting Esper that the U.S. troops were merely “transiting” through Iraq, and that all of them would head to Kuwait, Qatar or back to the United States within a month.

There has been no confirmation of those plans from the Pentagon.

Thu Oct 24 , 2019
The officer who was fired in the 2014 chokehold death of Eric Garner is suing the New York Police Department and the police commissioner to be reinstated. Daniel Pantaleo’s lawyer, Stuart London, told the New York Post the lawsuit was filed Wednesday and argued that his termination following an administrative […] 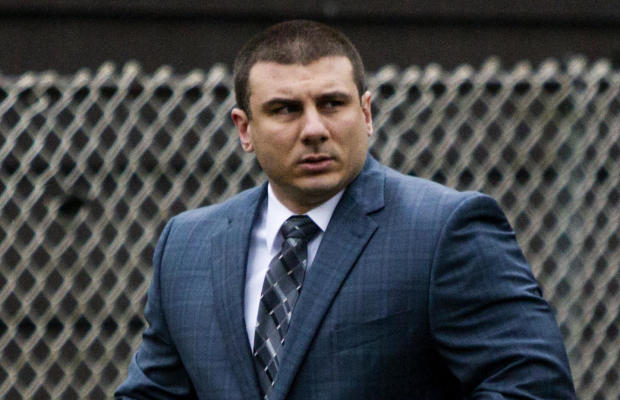