BSEE also said 47%, or 1.28 billion cubic feet per day (bcfd), in offshore natural gas production remained shut as of midday on Monday. On Sunday, the agency said 62%, or 1.68 bcfd, was shut.

Phillips 66 <PSX.N> said on Monday that Delta did not disrupt the power supply at its Lake Charles, Louisiana, manufacturing complex, which includes a 260,000-bpd refinery that has been shut since Aug. 25 because of extensive damage to the electrical power infrastructure by Hurricane Laura.

Phillips 66 plans to begin restart the Lake Charles refinery by the end of this week, the company said.

The Louisiana Offshore Oil (LOOP) said on Monday it resumed offloading tankers at its terminal in the Gulf, south of the Louisiana coast. The LOOP is the only U.S. port where the largest tankers can dock.

Between Oct. 6 and Monday, a cumulative total of 10.1 million barrels of crude oil production and 9.6 billion cubic feet of natural gas output from the Gulf has been shut because of Hurricane Delta.

Mon Oct 12 , 2020
Supreme Court nominee Judge Amy Coney Barrett is sworn into her Senate Judiciary Committee confirmation hearing on Capitol Hill on October 12, 2020, in Washington. PATRICK SEMANSKY/POOL/AFP via Getty Images After silently listening to senators for nearly five hours, Barrett stood and raised her right hand to be sworn in, […] 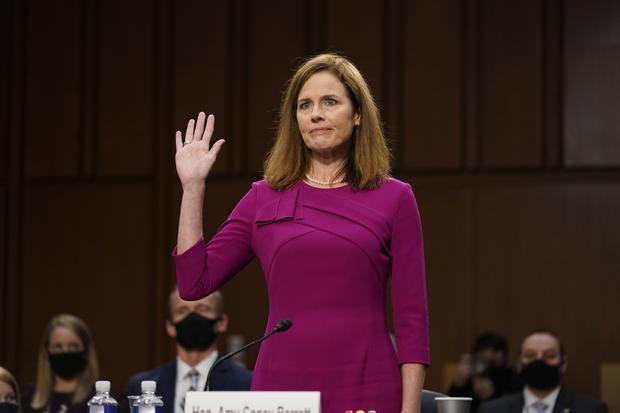