FRANKFURT (Reuters) – The European Central Bank is “fully prepared” to provide even more stimulus as soon as June to support an economy that may shrink by a tenth this year due to the COVID-19 pandemic, the accounts of the bank’s April meeting showed on Friday.

The ECB has already unveiled a long list of measures to mitigate recession, including 1.1 trillion euros worth of bond buys and loans at deeply negative rates. Policymakers apparently fear this may not be enough.

Arguing that a “V”-shaped recovery was unlikely as movement restrictions may be lengthy, policymakers highlighted flexibility in the bank’s 750 billion euro Pandemic Emergency Purchase Scheme, its flagship bond buying scheme during the crisis.

“It (the Governing Council) was fully prepared to increase the size of the PEPP and adjust its composition, and potentially its other instruments, if, in the light of information that became available before its June meeting, it judged that the scale of the stimulus was falling short of what was needed,” the ECB said.

While policymakers held back on adjusting bond purchases in April, the accounts are likely to fuel speculation of a move when policymakers next meet on June 4.

Analysts polled by Reuters already expect the ECB to increase bond buy 375 million euros in June with some putting the increase as high at 750 million.

Policymakers are also likely to discuss in June whether to buy corporate bonds that recently lost their investment grade rating and speculation over so-called “fallen angels” may increase after ECB board member Isabel Schnabel highlighted the issue.

“The number of ‘fallen angel’ bonds was increasing, while downgrades of high-yield issuers were already much more prominent,” Schnabel told policymakers, according to the minutes.

The ECB already accepts bonds that have been downgraded to junk since April 7 as collateral.

German airline Lufthansa <LHAG.DE> and French carmaker Renault <RENA.PA> were among euro zone companies that lost one of their investment-grade ratings since that date.

Fri May 22 , 2020
Residents salvage their belongings from the rubble of a damaged house in the aftermath of Cyclone Amphan, in South 24 Parganas district in the eastern state of West Bengal, India, May 22, 2020. REUTERS/Rupak De Chowdhuri May 22, 2020 By Ruma Paul and and Subrata Nagchoudhury KOLKATA/DHAKA (Reuters) – Prime […] 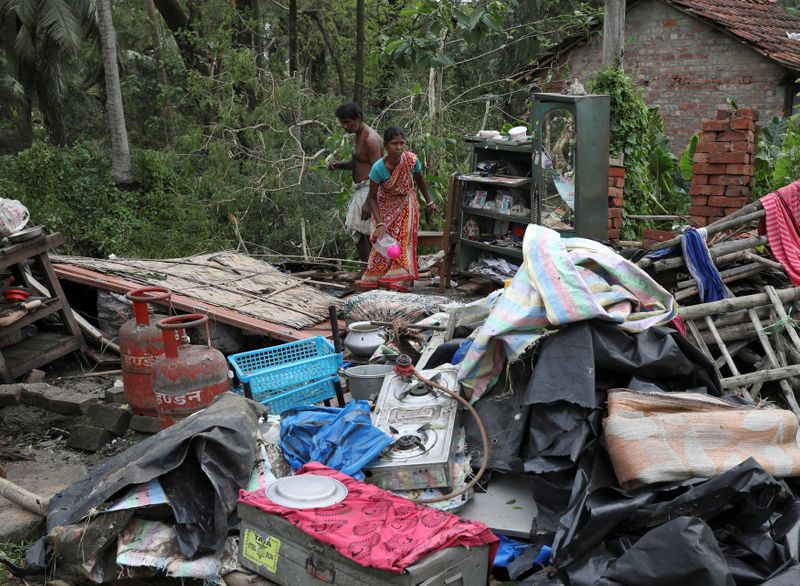