WASHINGTON (Reuters) – U.S. retail sales dropped by the most in 10 months in December, likely the result of Americans starting their holiday shopping in October to avoid empty shelves at stores.

Economists cautioned against reading the unexpected plunge in retail sales last month reported by the Commerce Department on Friday as a sign of weakness. Consumer spending remains underpinned by huge savings, rising wages as companies scramble for scarce workers as well as soaring household wealth.

Still, the report and news of an unexpected decline in production at factories in December suggested the economy lost momentum at the end of 2021. That trend likely persisted into January amid spiraling COVID-19 infections, driven by the Omicron variant, which have disrupted businesses and schooling.

“It is clear that most shoppers heeded the advice to get holiday shopping done early and that, combined with a massive surge in goods spending earlier in the year, conspired to pull sales sharply lower to end the year,” said Tim Quinlan, a senior economist at Wells Fargo in Charlotte, North Carolina.

“We do not view today’s drop in retail sales as a sign that consumer spending is coming unglued.”

Retail sales fell 1.9% last month, the largest decline since February 2021, after rising 0.2% in November. Economists polled by Reuters had forecast retail sales unchanged. Estimates ranged from as low as a drop of 2.0% to as high as a 0.8% increase.

Bottlenecks in the supply chains caused by the pandemic have led to shortages of goods, including motor vehicles. The pulling forward of sales also likely impacted the so-called seasonal factor, the model that the government uses to strip out seasonal fluctuations from the data.

The online sales category was hardest hit by the drag from the seasonal factor, plunging 8.7%. Receipts at auto dealerships slipped 0.4% after rising 0.2% in November. Automobiles remain scarce because of a global semiconductor shortage.

Motor vehicles could remain in short supply for while. A separate report from the Federal Reserve on Friday showed a 1.3% drop in production at motor vehicle plants helped to pull down manufacturing output 0.3% in December.

Production at factories increased 0.6% in November. Economists had expected output to rise 0.5%.

Economists still expected the Fed to start raising interest rates in March, against the backdrop of high inflation.

“The level of nominal and real goods spending remains elevated, and we do not think today’s reading will have a significant impact on the Fed’s decision to liftoff rates, likely in March, which will depend more heavily on inflation than activity data,” said Andrew Hollenhorst, chief economist at Citigroup in New York.

Stocks on Wall Street were lower. The dollar rose against a basket of currencies. U.S. Treasury prices fell.

Sales at electronics and appliance stores dropped 2.9%. Receipts at service stations fell 0.7% as gasoline prices retreated from higher levels seen in the prior months. Sales at food and beverage stores fell 0.5%. Sales at clothing stores declined 3.1%. There were also declines is sales at sporting goods, hobby, musical instrument and book stores.

A third report from the Commerce Department showed business inventories increased a strong 1.3% in November.

“On net, we still see real GDP growth in the fourth quarter tracking close to our 7.0% rate forecast,” said Daniel Silver, an economist at JPMorgan in New York.

The economy grew at a 2.3% pace in the third quarter. Growth last year is expected to have been the strongest since 1984.

Fri Jan 14 , 2022
FILE PHOTO: The Google logo is pictured at the entrance to the Google offices in London, Britain January 18, 2019. REUTERS/Hannah McKay January 14, 2022 WASHINGTON (Reuters) – Chief executives of Alphabet Inc’s Google and Facebook were aware of a deal to carve up part of the online advertising market, […] 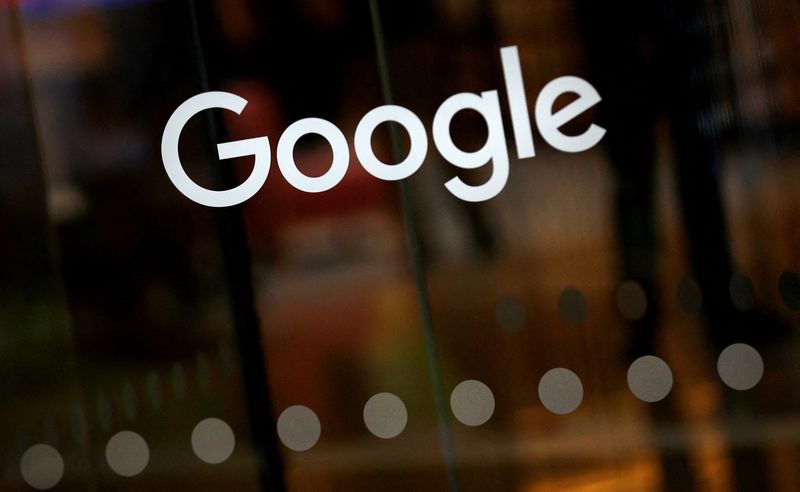