If you’re looking to buy a TV, you’ve likely been thinking that Black Friday is the best time to shop. But Black Friday sales are already happening this year. There are major online deals on 4K and OLED televisions at Samsung, Amazon, Walmart and Best Buy that you can shop today.

Apart from wanting to find an amazing deal, you may be wondering where to even start when it comes to picking out a new TV. Is Amazon’s new 4K Fire TV Omni Series a good option? Or should you be looking at something more along the lines of the Samsung’s 8K TVs?

Frankly, shopping for a TV online can be tricky. Because there are so many specs and bells and whistles on televisions, even the research process for buyers can be daunting. That’s where we come in: We’re here to help you sort out how to buy a TV online, without making a trek to the store and trying to fit a 5-plus-foot-wide screen in the back of a car.

First things first: Before you go hunting for the internet’s best TV deals, you’ll need a tape measure. You’ll save yourself a fair amount of hassle by understanding the size limits of your space. Another important top-line thing to consider when TV shopping is what you’ll be watching. Are you planning to host friends for a Super Bowl watch party? Sports fans should be on the lookout for a television large enough to see from anywhere in a room.

Are you more of a cinephile, hoping to stream movies on Netflix and HBO Max? Movie nuts should keep their eyes peeled for high-resolution (4K) models and HDR and OLED technology. These features help maintain the richness of colors and contrast in your favorite movies.

Here are five important questions to ask when shopping for a new television, as well as some of the best pre-Black Friday TV deals worth checking out.

TV prices: What is your price point?

A new TV can run you anywhere from $100 to $10,000 — or more. Naturally, the lowest-price options will have some trade-offs: Size, resolution and display tech are all common places you’ll make compromises in the name of cost savings. On the other end of the price spectrum, the luxury options have all the latest bells and whistles, like built-in surround sound and the most impressive color-retention features. Here’s what you can get at three price points, so you have an idea of the features available at each.

At just 32 inches, this budget-friendly Toshiba TV is suited for small spaces like bedrooms or offices. It runs Amazon’s FireTV platform, so you can stream new shows from Hulu, Netflix and more without plugging in extra equipment. You’ll trade a fair amount of resolution for the tiny price tag, though. This unit has a 720p display–that’s technically high definition, but not the 1080p HD you’ll find on many modern televisions.

This smart TV has the easy-to-use (and easy-to-customize) Roku operating system built in, which provides access to thousands of paid and free TV channels. You many not be familiar with its brand name (Onn), but this 70-inch Roku TV is rated 4.3 stars at Walmart — and you’ll be hard pressed to find another 70″ television with Roku baked in for this price.

When you’re willing to spend $500, your options open up quite a bit. This highly reviewed 50-inch TCL set has QLED (quantum dot LED) technology, 4K resolution and Dolby Vision. All those features together improve the sharpness, brightness, color and contrast of an image.

Once you get into the four-figure price bracket, like with this Samsung 4K Neo QLED, you access even more top-of-the-line features such as a built-in Alexa assistant and a premium piece of audio technology called object-tracking sound (OTS). With OTS, your television analyzes the action on screen and tries to replicate a surround-sound experience without any external speakers.

TV size: What’s the right size television for your space?

Smaller sets, like this Roku model from TCL, give you more wiggle room in terms of resolution, since each individual pixel covers less surface area. With a screen this small (32 inches), you don’t need more than 1080p resolution: The benefits of 4K don’t become obvious unless you’re sitting very (and we mean very) close to the screen. Again, the ideal viewing distance for a 32-inch 1080p TV like this one is between 4 and 6.5 feet. It’s currently on sale for $50 off during Walmart Deals for Days.

A mid-size television, 55 to 65 inches along the diagonal, is large enough for many living rooms. The ideal viewing distance for a 55-inch 4K TV, such as this model, is between 4.5 and 7 feet. This brand new model, now $140 off during Amazon’s early Black Friday sale, is proving popular with CBS Essentials shoppers.

If you just need more screen, this 86-inch LG should fill up your space. It has a 4K UHD resolution and works with Alexa and Google Assistant.

It is a very large television, so if that’s your endgame, this is a well-reviewed option.

HD, 4K and 8K TVs: Which resolution is right?

Now that we’ve sorted out the size issue, we’ll tackle the resolution. These days, 4K TVs are more affordable than ever, so the temptation to bite the bullet and invest in the upgraded image quality is strong. But, if you’re planning to view your mid-size TV set from 9-plus feet away, the added benefit may not be noticeable. Higher resolution is more important if you’re planning on watching sports and movies, and less important if you’re watching news and reality TV.

Here is where we’ll mention that, in 2021, most TV channels still broadcast in 1080. This 43-inch Hisense set has 1080p resolution and built-in AndroidTV. For many shoppers, the sub-$300 price tag will far outweigh what this set sacrifices in pixels. As we mentioned before, the smaller your screen is, the less noticeable the benefits of Ultra-HD resolutions (like 4K and 8K) are at a given viewing distance.

This model of Amazon’s new Fire TV Omni Series measures 55 inches along the diagonal and has 4K resolution. Like many 4K models, this television will automatically upscale 1080i broadcast content to 4K. If image quality is of the upmost importance, the additional cost may be worth it. This TV also comes with a far-field microphone for true hands-free control. That means you can change the channel without talking to your Alexa remote.

The Amazon Fire TV Omni Series is on sale during Amazon’s early Black Friday sale, so it’s a great time to pick one up.

UHD 8K televisions have four times as many pixels as their 4K brethren, but whether you can perceive the difference in quality depends heavily on your viewing distance and the size of the screen. Samsung says this TV upscales all source material to 8K, though results may vary based on the content’s native resolution.

Eventually, there will be 8K content available to watch, but for now, 8K resolution functions mostly as a very expensive future-proofing option.

What is your preferred smart TV interface?

Roku, Fire TV and Android TV are all popular platforms for organizing your viewing experience and taking your enjoyment on television well beyond what’s available on the cable box. LG and Samsung also have their own proprietary systems, so if you’re devoted to their interfaces, you’ll want to buy one of their TVs. If you primarily use an Apple TV, you can skip over this section, as this probably won’t matter much to you.

If you don’t have experience with smart TV interfaces, Roku is an apt, easy-to-use option for beginners and smart TV pros alike.

If you’re already used to a certain interface, switching can be tough, especially if you’re not particularly tech savvy. Fans of the super-simple Roku platform should look for a TV–like this TCL model–with a built-in Roku system. (Plus, the picture quality of this 6-series model is stunning for the money.)

Similarly, Android users can keep all of their tech in the same universe with a television that has on-board AndroidTV.

With the voice-activated, Alexa-powered remote, you can switch between channels, search for movies by genre and even check the weather using this TV. Fire TV is a good choice if you’ve already built an Alexa-based smart home.

LED, QLED or OLED: What display tech is right for you?

If you’ve shopped for a TV in the past five years, you’ve probably seen the terms LED, QLED and OLED mentioned in the product descriptions. Here’s what all those display tech terms mean and how that applies to you.

One way to cut costs when shopping for a TV is to search for an LED option. LED stands for light-emitting diode. The matrix of small lights behind your screen shine through an LCD layer, combining to create the color and brightness you see from your couch.

The differences between LED TVs and newer, fancier models primarily register in their color and luminosity output. If you don’t feel strongly about the accuracy and saturation of your TV’s colors, you can save a bit of cash without sacrificing much by choosing a set like this 50-inch Samsung, now on sale for Black Friday.

QLED TVs have a quantum-dot layer sandwiched between those LED lights and the LCD layer. This middle layer filters the light to produce more vibrant and accurate colors.

If you’re looking to get the richest color out of your set, a QLED model, like this 55-inch TCL 6-Series, could be a good option.

Unlike LED and QLED TVs, OLED TVs don’t have a backlight layer. Instead, each pixel is it’s own teeny-tiny LED light that can independently change its luminosity and even turn off completely. Because each pixel functions independently, these TVs have elite image quality and the darkest shadows. OLED televisions also tend to be ultra thin — this particular set measures just 1.8 inches thick.

The one issue with OLED TV sets is that, if you’re planning on watching a lot of content with static elements (think scoreboards or omnipresent logos), you risk what is called “burn-in.” With burn-in, the the ghost of an on-screen element, like a logo, remains onscreen even after you change the channel. It’s uncommon with normal use, but still possible.

The best Black Friday deals on watches you can shop now

Wed Nov 24 , 2021
If you’re running out of time to get your holiday shopping done, all these watches are on sale and make great gifts.  Azman Mohamad / EyeEm / Getty Images With the holidays looming, it might feel like you’re racing against the clock to check off everyone on your shopping list. […] 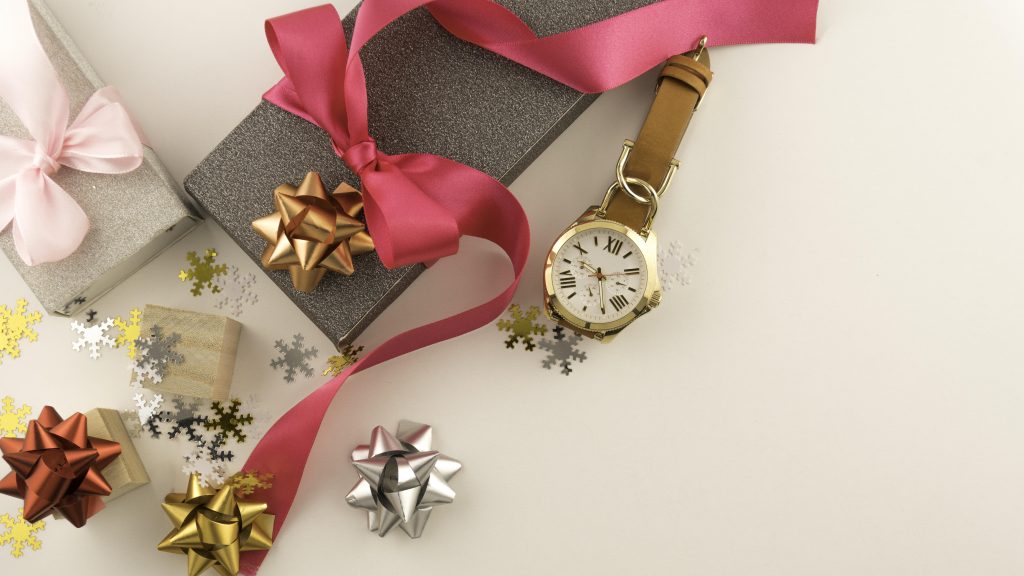