Tokyo — There are more problems for the troubled Tokyo Olympics. The director of the opening ceremonies was fired just hours before the spectacle is scheduled to kick off. And despite reports that the Games could be canceled, officials said they are “currently proceeding as planned.”

Team USA’s Simone Biles trained with none of the usual spectators in place on Thursday because of COVID restrictions. While she mostly managed to stick her landings, Biles has said she’s unsure of how she’ll do in actual competition without the energy of a live crowd.

There are more than 90 cases of COVID in people connected to the Games. USA volleyball player Taylor Crabb and four other American athletes have been sidelined by positive COVID tests.

“After taking every precaution, getting vaccinated and following protocols, I have tested positive for COVID-19,” Crabb announced Thursday on Instagram. “I’m symptom-free, thankfully, but deeply disappointed to not be able to join Jake on the sand and compete as a member of Team USA. I’ve faced adversity before, and I will face it again, but it doesn’t take the sting out of the situation.”

Meanwhile, first lady Jill Biden arrived in Tokyo ahead of Friday’s opening ceremony, as the city logged another round of nearly 2,000 new daily cases alone — a six-month high.

But the circulating virus isn’t the only issue at these Games. As preparations for the opening extravaganza continued, the event’s creative director was immediately fired after a video of a 1998 comedy skit surfaced in which he poked fun at the Holocaust. Two other top Japanese Olympic officials had already been forced out in separate controversies.

The Olympic Organizing Committee president Seiko Hashimoto on Thursday expressed his “deepest apologies for the inconvenience and concern this situation has caused to the many people involved.”

“The country just needs the athletics to start happening,” Rich said. “The organizers are probably hoping, like, ‘yes, yes, win some medals so that we can draw attention away from all these scandals.'”

CBS News has learned that USA Gymnastics has decided to stay in its own hotel rather than move to the Olympic Village. A team spokesman said this had always been the plan.

Thu Jul 22 , 2021
Washington — The House on Thursday passed a bill to expand and accelerate the special immigrant visa process for Afghans who helped Americans forces who are stranded in the country as the U.S. prepares to withdraw combat troops by August 31.  The House’s bill would eliminate excess paperwork and increase […] 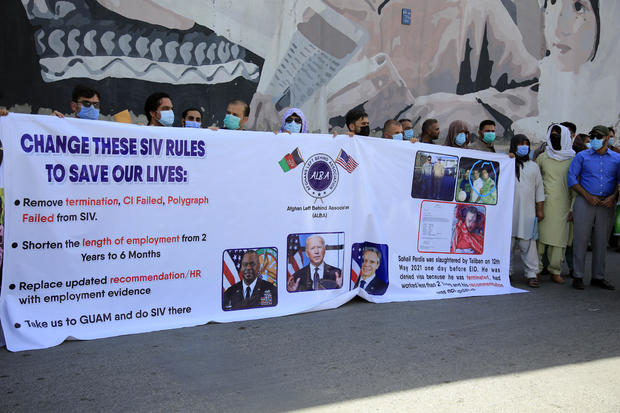