Stocks rose to all-time highs on Thursday as Congress confirmed the election of Joe Biden as president and traders looked past the unrest in Washington.

Sentiment on Wall Street got a boost after the Institute for Supply Management said its index for nonmanufacturing activity in the U.S. rose to 57.2 in December from 55.9 in November. Economists polled by Dow Jones had forecast a print of 54.5.

Walgreens Boots Alliance rose 6.5% to lead the Dow higher on the back of stronger-than-expected quarterly results. Shares of JPMorgan Chase rose 3.2% after the banking giant was upgraded to buy from neutral by an analyst at Bank of America. The tech and consumer discretionary sectors rose 2.3% and 2%, respectively, to lift the S&P 500.

American Express fell more than 1.6% after The Wall Street Journal reported that federal investigators were probing the company’s card sales practices, slightly weighing on the Dow.

On Wednesday, pro-Trump rioters stormed the U.S. Capitol just as lawmakers started the procedural process of counting the Electoral College votes and formally declaring Biden the winner. Still, the Dow and the S&P 500 closed higher on Wednesday as traders looked beyond the event amid increasing prospects for more fiscal stimulus.

“There should be no mystery as to why the markets didn’t care about what happened in the Capital yesterday, however disturbing, disgraceful, and embarrassing it was,” said Peter Boockvar, chief investment officer at Bleakley Advisory Group. “It’s because it has no bearing on the direction of the economy, earnings and interest rates. It’s that simple.”

Congress reconvened to continue the process to confirm Biden’s win late Wednesday evening after the Capitol building was secured. That affirmation came early Thursday morning with the House of Representatives and the Senate rejecting efforts to object to the acceptance of the Electoral College votes from Arizona and Pennsylvania.

President Donald Trump said in a statement after the Congress confirmation of Biden that “there will be an orderly transition on January 20th.”

“I think the reason the markets aren’t too flummoxed is it’s not going to change the transition of power,” Tom Lee, Fundstrat Global Advisors co-founder, said.

Traders focused on Wednesday on the possibility for additional fiscal aid has after the Democratic party secured a slim majority in the Senate, giving it control of both congressional chambers.

Georgia’s election results create a 50-50 Senate that Democrats will control, due to the tiebreaking vote in Vice President-elect Kamala Harris. It is widely expected that a Democrat-held Senate would push for a more robust stimulus package, speculation which boosted equities on Wednesday, especially stocks hit hardest during the Covid recession.

“With the political tensions easing, more stimulus expected to help boost the economy, and coronavirus vaccines helping bring a measure of calm to investors and traders, it seems that the market can now focus on earnings season,” he said.

On the data front, initial jobless claims came in at 787,000 for the week ending Dec. 31, the Labor Department said. Economists polled by Dow Jones expected a print of 815,000. The data came ahead of the department’s monthly jobs report release, which is set for Friday morning.

Thu Jan 7 , 2021
At least 50 police officers were injured in the Capitol riot that also killed four people after supporters of President Donald Trump invaded the building to prevent the confirmation of Joe Biden’s electoral victory. One woman was shot by a police officer, while another woman and two men died from […] 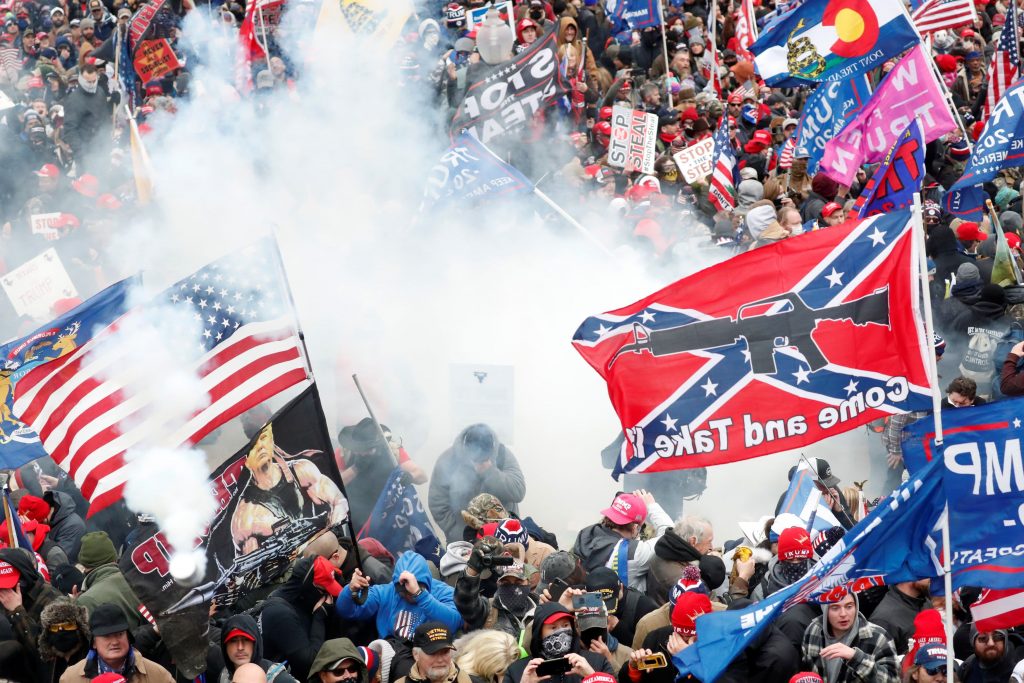