Stocks continued their upswing for a fourth-straight day as the results of the U.S. presidential election continue to hang in the balance.

A positive report from General Motors, along with a fresh data point on the jobs market and news from the Federal Reserve also aided sentiment.

The Dow Jones Industrial Average jumped over 550 points or 2%, while the tech-heavy Nasdaq composite added 2.4% as investors sighed a breath of relief that regulation and corporate taxes may not be as bad as feared. The S&P 500 climbed 2.1%, surpassing the 3,500 level.

GM shares rose 6% on Thursday after the automaker reported a better-than-expected quarter due to rising demand for trucks. CEO Mary Barra, commenting during an interview, that the automaker’s talks with Nikola are ongoing.

Nintendo shares were up more than 7% after the video game giant raised its forecast on Switch shipments to 24 million units, citing benefits of people staying at home and playing games such as “Animal Crossing.

ECON, FED IN THE SPOTLIGHT

The Federal Open Market Committee kept rates unchanged, noted that it is committed to the current policy until inflation is “moderately” above 2%.

In its statement, the Fed said the path of the economy will continue to depend on the course of COVID-19, adding that the economy and jobs have continued to recover, though they are below the levels at the start of the year.

TRUMP OR BIDEN? FED CHAIR POWELL IS STILL A RAINMAKER

Ahead of the decision, initial jobless claims showed a slight rise to 751,000 compared to economists’ expectations of 735,000, for the week ending Oct. 31. Continuing claims came in at 7.285 million, as the country still grapples with the COVID-19 pandemic.

As for the election, the odds of a contested result are growing more likely.

Up for grabs are Nevada, Pennsylvania, Georgia and North Carolina, with those results still too-close-to-call.

TECH EARNINGS IN THE SPOTLIGHT

Qualcomm shares soared after the chipmaker posted better-than-expected results and gave guidance that pleased investors, highlighting the effects of the coming wave of 5G-enabled smartphones.

Expedia shares also higher after the travel services provider said its results weren’t as bad as feared, despite the sharp drop in demand for travel due to the pandemic.

Investors will get quarterly looks at Peloton, Alibaba, T-Mobile USA, Square, Uber Technologies, Booking.com, among several others, after the close of trading.

West Texas Intermediate crude oil dipped slightly, holding above the $39 a barrel level, while gold continued its march upwards, gaining 1.2% to trade at $1,918.50 an ounce.

WATCH: Where things stand in the vote count of 2020 election

Thu Nov 5 , 2020
Transcript for Where things stand in the vote count of 2020 election the map to give you an idea how each side can get to 270 and why Joe Biden is increasingly confident. That first clear path for Joe Biden. The easiest way to explain, Joe Biden needs two right […] 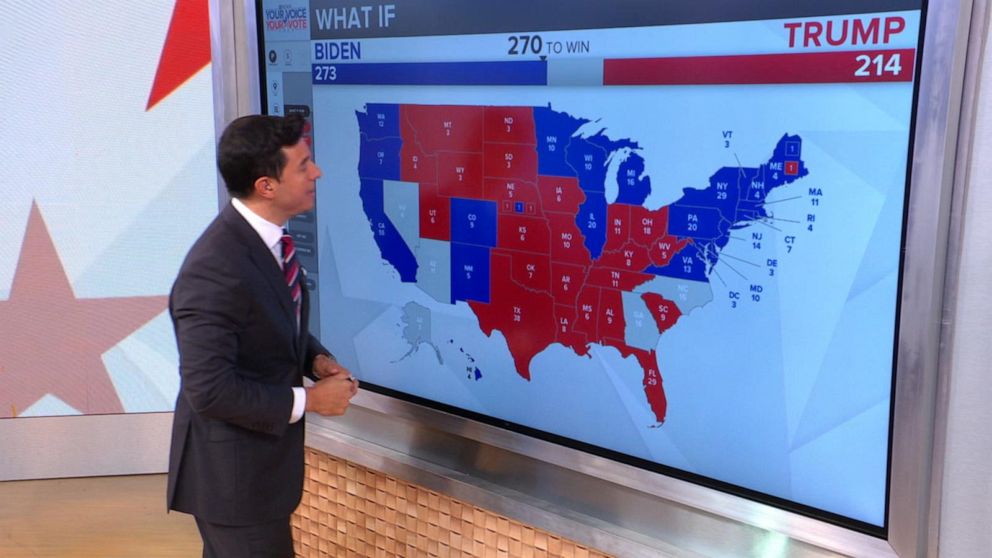