U.S. stocks climbed on Wednesday, led by tech shares, even as the results of the presidential contest so far failed to yield a clear winner.

The Dow Jones Industrial Average jumped 500 points, or 1.8%. The S&P 500 traded 2.8% higher. The tech-heavy Nasdaq Composite popped 3.9% as investors crowded back into the trade that’s been working for most of this tumultuous year.

NBC News projected that Biden is the apparent winner in Wisconsin, a state Trump won in 2016. Trump’s campaign manager said Trump plans to request a formal recount in Wisconsin.

Shares of major tech-related companies jumped with Amazon, Apple and Microsoft all up at least 4%. Facebook popped 8%, while Google-parent Alphabet jumped more than 6%.

Wall Street traders and investors attributed the move in tech to a number of factors, including the group’s consistently solid returns and safety appeal in times of uncertainty. Additionally, some viewed the potential for Republicans to hold onto the Senate as a positive for the group since higher capital gains taxes from a Democrat congress could have weighed on the high-growth sector.

Wall Street was coming off a strong two-day rally. The Dow jumped more than 500 points on Tuesday following a 400-point advance in the previous session. The S&P 500 gained about 3% in that two-day period, rebounding from sharp losses last week.

Meanwhile, Sara Gideon, a Democrat who challenged Maine Sen. Susan Collins, conceded on Wednesday afternoon. NBC has not yet called the race.

One year out from a presidential election, the S&P 500 averaged a return of more than 8%, according to data from Baird dating back to 1960. 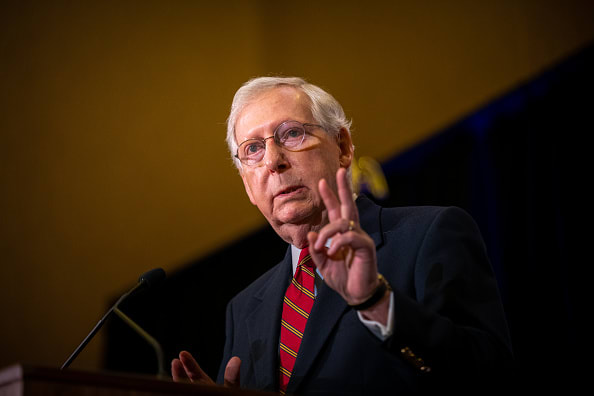