The Dow Jones Industrial Average rebounded Wednesday after a string of negative trading sessions this September.

“Despite concerns about the recent downshift in economic and business cycle momentum, we remain confident that strong growth lies ahead and activity is bound to re-accelerate,” wrote JPMorgan strategist Dubravko Lakos-Bujas, in a note Wednesday. “We remain positive on the equity outlook, and expect S&P 500 to reach 4,700 by end of this year and surpass 5,000 next year on better than expected earnings.”

Some bullish economic news released before the bell Wednesday helped stabilize investor sentiment. The New York Fed’s Empire Index, a measure of manufacturing in the region, came in at 34.3 for September, way ahead of the 18 consensus estimate from FactSet and an acceleration from August.

Casino stocks like Las Vegas Sands and Wynn Resorts traded in the red again on Wednesday. Those names took a big hit Tuesday as the government of Macau looks to increase regulatory scrutiny over casinos and Chinese health authorities reported a Covid-19 outbreak.

Markets have been in a funk so far this month amid rising investor worries about the delta variant derailing the economic recovery, along with hand-wringing over the next action by the Federal Reserve.

September has historically been a down month for the markets, which have seen an average decline of 0.56% in the month since 1945, according to CFRA. And after eight months of straight gains, strategists say a pullback could be imminent.

The S&P 500 has continued to move higher throughout the year, dipping below the 50-day moving average only once, according to Fundstrat. Mike Wilson, chief investment officer at Morgan Stanley, told CNBC’s “Fast Money” that could be just the beginning.

“The midcycle transition always ends with a correction in the index,” he said of the S&P 500. “Maybe it’ll be this week, maybe a month from now. I don’t think we’ll get done with this year, however, with that 50-day moving average holding up throughout the year because that’s the pattern we typically see in this part of the recovery phase.”

Wed Sep 15 , 2021
CBS News projects that the “no” vote will win the recall election, meaning Governor Gavin Newsom will remain in office. Newsom avoided an upset loss that would have sent Democrats scrambling ahead of the 2021 gubernatorial elections in New Jersey and Virginia, as well as the 2022 midterm elections. Less […] 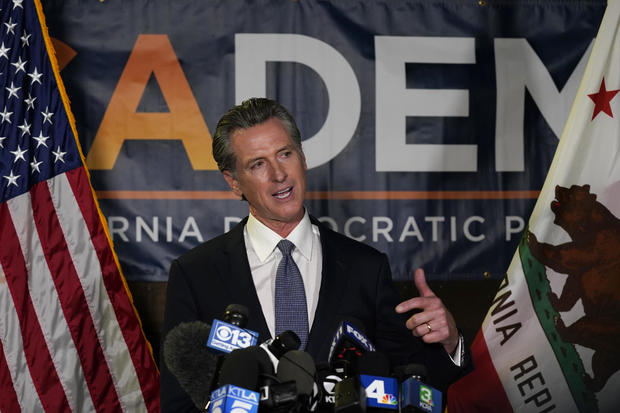