FILE PHOTO: A U.S. dollar note is seen in front of a stock graph in this November 7, 2016 picture illustration. REUTERS/Dado Ruvic/Illustration/File Photo

LONDON (Reuters) – The dollar sank to its lowest level in over two months against a basket of peer currencies on Friday, as vote counting for the contentious U.S. election dragged on and investors predicted more losses for the currency.

Investors are betting that Democrat Joe Biden will become the next president but Republicans will retain control of the Senate, which will make it difficult for the Democrats to pass the larger fiscal spending package they have been pushing.

Biden maintains an edge over President Donald Trump, but a few important states are still counting votes and Trump is mounting legal challenges to vote counts, so there is still a high degree of uncertainty.

The dollar index <=USD> fell against a basket of six major currencies to 92.274, hitting its lowest level since September 2.

For the week, the dollar index was down 1.6%, on course for its biggest drop in almost four months.

A large decline in long-term Treasury yields due to expectations for less fiscal spending, combined with a rally in equities and other riskier assets, has placed the dollar under consistent selling pressure that is likely to continue.

“So far investors have been prepared to overlook the threat of a contested election, presumably seeing Donald Trump’s legal initiatives as ‘frivolous’ and these benign conditions have generated a broad-based dollar decline,” said strategists at ING.

“The fact that dollar/yen (which never moves) is trading at 103.50, tells us that there is a broader dollar move afoot than a mere risk rally.”

The dollar fell further against the Japanese yen, trading at 103.23 yen <JPY=D3> on Friday, close to an eight-month low.

Japanese Prime Minister Yoshihide Suga has vowed to work closely with overseas authorities to keep currency moves stable, because a strong yen is widely viewed as a threat to Japan’s economy.

The single currency has risen sharply this week on the dollar’s weakness, but has also benefited from news of the European Union inching closer to a budget deal.

Voting tallies from several U.S. states continued to trickle in during Asian trading hours, but currencies showed little reaction because the declaration of an outright winner could take several more days or even weeks, some traders said.

Investors were also awaiting the release of U.S. non-farm payrolls later on Friday, forecast to show a slight slowdown in job creation.

Worries about the U.S. economy are growing, which is a reason to expect declines in the dollar to continue into next year, some analysts say. The rise in new coronavirus cases to record levels in several states could also curb economic activity.

ING also added that the dollar sell-off may have a little more mileage today if Biden formally secures 270 electoral college votes or if a softer-than-expected October payrolls report suggests that the Fed will have to throw more liquidity at the market.

The onshore yuan <CNY=CFXS> fell to 6.6386 per dollar but still remained close to its more than two-year high reached on Thursday.

Many investors expect a Biden administration will slightly scale back Trump’s trade war with China, which should benefit the yuan.

Elsewhere, the Australian dollar <AUD=D3> fell against the greenback after the country’s central bank said it is prepared to expand bond purchases if needed to support the economy.

Fri Nov 6 , 2020
A medic administers a polymerase chain reaction (PCR) swab test on a motorist at a drive-thru coronavirus testing center at the Talavera car park in Wuerzburg, Germany, on Monday, Aug. 31, 2020. Bloomberg | Bloomberg | Getty Images LONDON — Germany was lauded for its initial response to the coronavirus […] 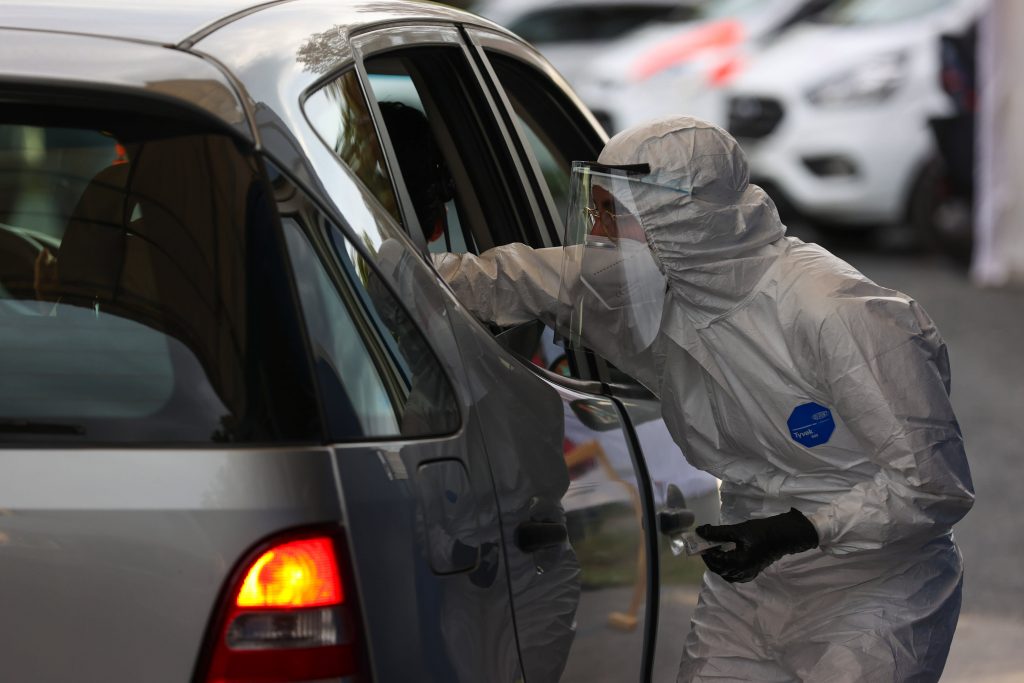