TOKYO (Reuters) – The dollar held firm on Friday after the U.S. Federal Reserve’s hawkish wing called for tapering bond purchases as investors looked to a highly-anticipated speech by Fed Chair Jerome Powell later in the day.

The common currency was not helped by a survey showing German consumer sentiment darkened heading into September due to accelerating inflation and rising COVID-19 cases.

Dallas Federal Reserve President Robert Kaplan suggested he expects the Fed to start raising interest rates next year, a comment that analyst took as more hawkish than last week when he appeared nervous about the potential impact of the Delta variant.

Many investors, however, think Powell will strike a more dovish tone in his speech at 1400 GMT in the Kansas City Fed’s central banking conference.

The event, which normally takes place in Jackson Hole, Wyoming, but is being held virtually for the second straight year due to the pandemic, has been often used by Fed policymakers in the past to provide guidance on their future policy.

“While Chair Powell is likely to … lay the groundwork for an eventual taper, we expect him to err on the side of caution and patience this week given that the macroeconomic landscape has deteriorated since the July policy gathering,” said Candice Bangsund, portfolio manager at Fiera Capital in Montreal, Canada.

Rough consensus in the market is that Powell will likely announce tapering in the fourth quarter, giving a clear signal at one meeting before the actual announcement.

“For Powell, there is no merit in specifying the exact timing for tapering at today’s speech. If he doesn’t drop a clear hint, that will be mildly positive for stocks,” said Kyosuke Suzuki, president of financial algotech company at Ryobi Systems.

Risk-sensitive currencies are likely to gain while the yen is likely to weaken in that case, he added.

For now, the dollar was supported also by caution after a suicide bomb attack in Kabul airport killed scores of civilians and 13 U.S. troops. Islamic State claimed responsibility.

Elsewhere, the Australian dollar fetched $0.7243 ahead of the country’s retail sales data.

Fri Aug 27 , 2021
FILE PHOTO: The NFL logo is pictured at an event in the Manhattan borough of New York City, New York, U.S., November 30, 2017. REUTERS/Carlo Allegri August 27, 2021 By Amy Tennery NEW YORK (Reuters) -The National Football League said on Thursday it has made clear it wanted to mandate […] 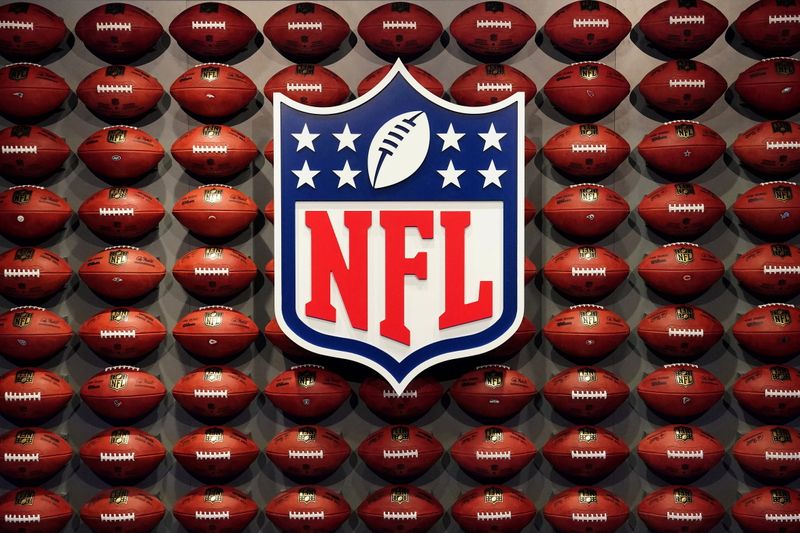