TOKYO (Reuters) – The dollar hovered near a three-month high versus major peers on Thursday after minutes of the Federal Reserve’s June policy meeting confirmed the world’s biggest central bank is moving toward tapering its asset purchases as soon as this year.

The dollar index, which measures the greenback against six rivals, was little changed at 92.687 from Wednesday, when it touched 92.844 for the first time since April 5.

Fed officials said substantial further progress on economic recovery “was generally seen as not having yet been met,” although participants expected progress to continue and agreed they must be ready to act if inflation or other risks materialize, according to the minutes of the Federal Open Market Committee (FOMC)’s June policy meeting released Wednesday.

Various participants at the session still felt conditions for curbing the bond-buying that is supplying markets with cash would be “met somewhat earlier than they had anticipated,” while others saw a less clear signal from incoming data, the minutes showed.

Economists polled by Reuters expect the Fed to announce a strategy in August or September for tapering its asset purchases. While most predict the first cut to its bond-buying program will begin early next year, about a third of respondents forecast it will happen in the final quarter of this year.

“The FOMC remains one of the more hawkish central banks under our coverage,” and will begin to discuss a taper at the policy meeting at the end of this month, Commonwealth Bank of Australia strategist Carol Kong wrote in a client note.

“We therefore expect the USD to trade with an upward bias.”

The dollar was mostly flat at $1.17995 per euro, just off a three-month peak of $1.17815 touched overnight, when German data raised doubts about the strength of Europe’s economic recovery.

Later on Thursday, European Central Bank President Christine Lagarde will hold a news conference after the monetary authority announces the outcome of an 18-month strategy review, which is likely to include a shift in the inflation target to 2% from “below but close to 2%” currently – which would theoretically allow for inflation overshoots.

Elsewhere, the dollar slipped 0.3% to 110.300 yen, as the pair continued to be weighed down by a slide in U.S. Treasury yields.

The benchmark 10-year Treasury note yielded 1.3045% on Thursday in Asia after dipping to 1.2960% overnight for the first time since mid-February.

“The fall in U.S. yields complicates the picture, but we see it mostly as … a recalibration of inflation expectations in the wake of the Fed’s hawkish pivot” at the June meeting, when policymakers surprised markets by signalling two interest rate hikes by end-2023, Westpac strategists wrote in a research note.

The Australian dollar, widely viewed as a proxy for risk appetite, traded 0.3% weaker at $0.74605, but still near the middle of the broad range in place over the past three weeks.

Reserve Bank of Australia Governor Philip Lowe reiterated Thursday that the unemployment rate would need to fall further and hold in the low 4% levels to lift inflation, an outcome not expected until 2024.

The previous day, the central bank took its first step towards stimulus tapering by announcing that a third round of its quantitative easing program would be smaller in scale than the previous two.

Oil-linked currencies weakened with crude continuing its slide after OPEC+ talks on increasing output ended at an impasse, with Russia now attempting to help bridge differences between Saudi Arabia and the United Arab Emirates.

Thu Jul 8 , 2021
A man wearing a face mask is seen inside the Shanghai Stock Exchange building, as the country is hit by a novel coronavirus outbreak, at the Pudong financial district in Shanghai, China February 28, 2020. REUTERS/Aly Song/Files July 8, 2021 By Tom Westbrook SINGAPORE (Reuters) – Asian stocks fell to […] 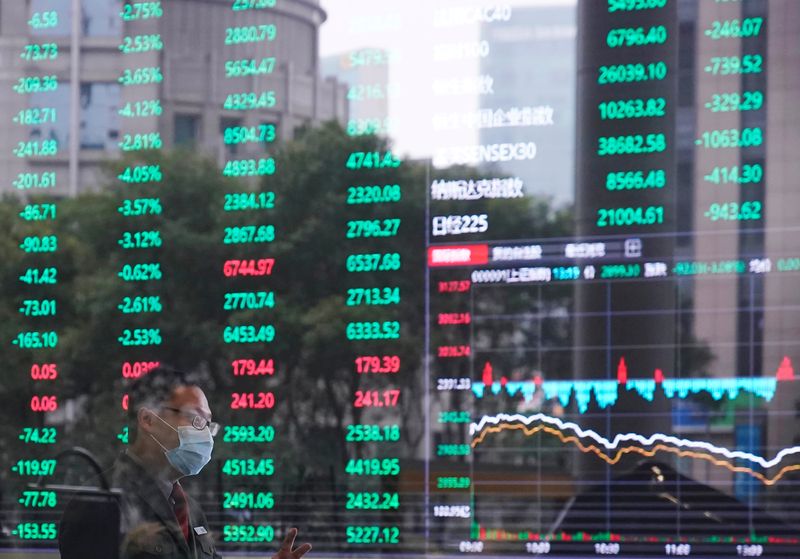