Magalie Laguerre-Wilkinson is a producer for the CBS series “Whistleblower.” The episode “Doctors vs Midwives: Dangerous Deliveries” airs Friday, June 14 at 8/7c on CBS.

I try to remind myself as often as possible never to be jaded in this profession of journalism I’ve known for the past 30 years.  Every story I approach, I treat it as if it’s my first day on the job.  But bearing children? Yes, I’ve done it twice. I’m a pro!  I approached pregnancy not just obviously emotionally, but also professionally.  I wasn’t just producing — I was “producing” an event, a show, an episode! I knew who my doctors were, I knew where I’d deliver, I took Lamaze classes, I asked questions, so many questions — I did everything right and everything, thank goodness, turned out well.  My first delivery had a little bit of drama — forceps, suction — but the outcome was a perfectly healthy, 9-pound daughter. Five years later — but three weeks before her due date — I had another almost 9-pound daughter.  And throughout both experiences I was also very aware that things could go wrong.

Jump ahead 12 years and I am producing a story about an OB-GYN doctor, Judy Robinson, who went to war with a small network of nurse midwives at an Indianapolis health care center called HealthNet, whose obstetrics and gynecology department she headed. According to a legal complaint, a former HealthNet administrator allowed the center’s midwives to oversee the care of high-risk pregnant women without physician supervision. Indiana State Medicaid rules do not permit nurse midwives to supervise the care of high-risk pregnancies on their own. A physician must be the one overseeing their treatment. In the case of HealthNet and Methodist Hospital, where the women delivered their babies, the results in some situations were tragic and also irreversible.

How could this happen in an industrialized nation?  Weren’t these women asking the same questions I’d asked? Weren’t they their own advocates?  They were, but for reasons we’ll never know, their pleas weren’t heard. Dr. Robinson wanted to get to the bottom of it. After flagging her superiors about these troubling outcomes on numerous occasions, she was considered a troublemaker and was eventually fired.

I discovered in this story that the common denominator with these patients was their socioeconomic status. They were all on Medicaid. The patients also had preexisting medical conditions that put them in a high-risk category.  High-risk can mean a variety of situations, as Dr. Robinson explains, “Typically, the patients that I would see were very high risk. They had multiple medical problems associated with their care.” Those problems can range from obesity to hypertension to substance abuse to diabetes, or a combination of issues.

While this is a story about a specific situation in a specific place, this is not a story about undermining the importance of midwives. Dr. Robinson considers them to be “a tremendous asset to any practice because he or she can practice obstetrics in a low-risk, normal patient population and I think do very well.”

It turns out many women prefer having midwives monitor their pregnancies, whether they decide to give birth at home, a birthing center or in a hospital. The reasons vary from a previous experience with a doctor gone awry to not wanting drugs and seeing the midwife not just as a coach but also a confidante, since they’re considered more involved with the mother throughout her pregnancy.

I discovered that the history of midwifery in the United States has its roots in the Jim Crow South where it was most prevalent. As medical procedures improved in the early 20th century for women in childbirth, transitioning from home births to hospitals, one group of Americans was excluded from that progress.  Because black people didn’t have access to hospitals and white doctors refused to treat black expectant mothers, midwives took over. Enter what were dubbed at the time “granny midwives” who were pillars of their communities and learned through generations of living in bondage the craft of bringing new life into the world.

The modern medical establishment even thought to ban midwives, considering midwifery an ancient practice.  Dr. Joseph DeLee, known as the “father of modern obstetrics” in the United States, had strong negative feelings about midwifery: “The midwife is a relic of barbarism. In civilized countries the midwife is wrong, has always been wrong.”  [The American Journal of Obstetrics and Diseases of Women and Children, Volume 73/ DeLee: “Progress Toward Ideal Obstetrics”]

While we’ve advanced from that thought process, I was shocked to discover the United States has the worst rate of maternal deaths in the developed world. Shocked because I know — and now realize — how fortunate I was. Meeting a mother like Dorothy Creek from Indianapolis, who was featured in our story, revealed an example of the botched deliveries many women — especially, but not exclusively, poor women — have endured in this country. Dorothy was scheduled to have a caesarian and went into labor early.  Her situation turned into an emergency and she says she had an unfortunate exchange with the midwife on duty.

“I was tellin’ the midwife, you know, ‘Please go get me a doctor, you know, I’m scheduled for a C-section’. And she told me at that time that she would decide when and if I needed a doctor.”

Dorothy then suffered a severe tear because it was too late for her C-section and her baby had to be pulled out of her. “They literally cut me from one end to the other to get her out. I’ll never be OK again. I’ll never be normal. I mean, it’s irreversible. There’s nothin’ that can be done about it.”

Dorothy’s daughter, Crystal, is now 14 years old, but the scars of her birth are still with her today. According to Dr. Robinson, medical records show Crystal has nerve damage to her arm and other neurological challenges, all likely the result of trauma during her delivery.

I also had the opportunity to meet LaDonna Mills. LaDonna’s daughter, Tana Tyler, was in the final stage of her pregnancy when she wasn’t feeling well one day and took herself to the hospital. According to medical records, Tana’s blood pressure was elevated so it was decided she would be induced. It was a decision allegedly made by midwives and not an OB-GYN. Tana passed out and an on-call doctor was finally notified and delivered her son via emergency C-section. Tana died of massive hemorrhaging. Her son survived but was born with cerebral palsy, which the family claims was caused by his traumatic birth. LaDonna and her husband, Stacy, are now raising their grandson.

Dorothy and LaDonna don’t know each other, and while their experiences are separated by a decade, the outcomes that occurred in the same place under similar circumstances highlight the plight of so many pregnant women in America. When Robinson was head of OB-GYN care at Methodist Hospital, she identified 17 cases of mismanaged care and two babies born with brain damage within a six-month period.

This story was heartbreaking for me in so many ways because it was a reminder that we, as women, can be so vulnerable. Having traveled the developing world as a producer for “60 Minutes,” I saw many unforgettable situations. From the Central African Republic to the Democratic Republic of Congo, from Haiti to the barrios of Venezuela — I can now add Indianapolis to the list of places where poor mothers are at risk because of neglect and lack of physician oversight. The difference this time around is that it was more about the money than availability of resources. These women thought they were getting the care they signed up for, but instead, they claim to have received a substandard version which came at a price: one paid with her life and the other with a lifelong disability. The more Medicaid patients who were seen, the more Medicaid could be billed, and it didn’t matter if the patient was seen by a doctor because, in many of these cases, Medicaid was being billed as though doctors had provided the care even when they had not.

Dr. Robinson is passionate about her profession, one she’s been practicing for over 30 years. She was willing to risk her career and reputation to stop what she saw as unethical practices. When she decided to become a whistleblower she didn’t do it for the money. She had a very good salary and continues to live a comfortable life. But no amount of money could allow her to look the other way and let these preventable practices continue, especially when seeing babies in the NICU, fighting for their lives.

“As a physician, as a human being, it pulls at my heartstrings,” she said. “Things have to change.”

While Wall Street obsesses over Tesla, one other auto stock is staging a quiet breakout

Fri Jun 14 , 2019
Tesla is taking off this month, posting its first weekly back-to-back gains of 2019, and reversing course after a sharp downturn earlier this year. But, while Wall Street watches the Tesla comeback, Ford Motor is making a quieter breakout. The stock is up 36% this year, its best since 2010. This is […] 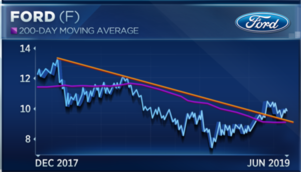