Attorney Michael Avenatti arrives for his sentencing hearing in an extortion scheme against Nike, at the United States Courthouse in the Manhattan borough of New York City, (SDNY) in New York, U.S., July 8, 2021.

Michael Avenatti, the brash attorney who had been a leading foe of then-President Donald Trump, was sentenced Thursday to 30 months in prison for a brazen, botched scheme to extort athletic apparel giant Nike out of up to $25 million.

That sentence was much lower than the nine years that was the bottom of the sentencing range suggested by federal guidelines, and not anywhere close to “a substantial” prison term sought by federal prosecutors for the California lawyer.

“I alone have destroyed my career, my relationships and my life. And there is no doubt I need to pay,” Avenatti, 50, tearfully told Manhattan federal court Judge Paul Gardephe before he was sentenced.

“I am truly sorry for all of the pain I caused to Mr. Franklin and others,” Avenatti said, referring to his former client Gary Franklin, an amateur basketball coach.

Daniels is one of several former Avenatti clients that he is charged with swindling in two other separate federal prosecutions, one of which is due to begin next week in California.

Gardephe said that in the Nike scheme, “Mr. Avenatti’s conduct was outrageous.”

‘He hijacked his client’s claims, and he used him to further his own agenda, which was to extort Nike millions of dollars for himself,” said the judge, who also sentenced Avenatti to three years of supervised release for the case, in which Avenatti was convicted at trial last year.

Franklin had retained Avenatti to pursue reforms by Nike, whom Franklin had claimed was corruptly paying amateur players and their families

Avenatti then leveraged that claim in early 2019 to demand not only a settlement with Franklin, but also a more lucrative consulting agreement from Nike for him and high-powered attorney Mark Geragos in exchange for avoiding a press conference in which he would air Franklin’s claims.

“I’m not f—ing around with this, and I’m not continuing to play games,” Avenatti told Nike’s lawyers, shortly before his arrest.

But Gardephe added that Avenatti deserved a lighter sentence than the range recommended by federal guidelines — from nine years to 11-years and three months — because, the judge said that for the first time in the case, “Mr. Avenatti has expressed what I believe to be severe remorse today.”

The judge also cited the brutal conditions in which Avenatti was kept for several months in a Manhattan federal prison after his 2019 arrest.

And Gardephe sharply noted, in justifying the lower-than-recommended sentence, how federal prosecutors did not criminally charge Geragos in spite of what they have said was his active participation with Avenatti in the shakedown.

The judge ordered Avenatti, who remains free on bond, to surrender on Sept. 15 to begin his sentence, which Gardephe recommended be served in at the federal prison camp in Sheridan, Oregon.

Avenatti’s lawyers had asked for a sentence of just six months.

During his statement to Gardephe, Avenatti noted that as a child, while other children dreamed of becoming professional athletes, said, “I dreamed about becoming a lawyer. About becoming a trial lawyer.”

“About doing good, and about pursuing and achieving justice.”

“For years I did just that, but then I lost my way. I betrayed my own values, my friends, my family and myself,” he said.

“I betrayed my profession. I became driven by the things that don’t matter in life. Over the past two years, your honor, I have thought to myself, why did this need to happen,” said Avenatti, who acknowledged that he will never work as a lawyer again.

‘”I’ve learned that all the fame, money notoriety in the world is meaningless,” said Avenatti.

Avenatti broke down and took several moments to compose himself as he spoke about the effects of his conduct on his three children.

He said that while most people want their children to be proud of their fathers, in the case of his own three children, “I want them to be ashamed” of him.

“Because if they’re ashamed, it means their moral compass is exactly what it should be,” he said.

At his trial next week, Avenatti is accused of crimes that include defrauding clients out of millions of dollars. One of those clients was a mentally ill paraplegic.

Avenatti next year is due back in Manhattan federal court to be tried on charges related to allegedly swindling Daniels, out of $300,000 in proceeds for a book she wrote.

As in the Nike case, Avenatti has pleaded not guilty in the other two cases.

During Thursday’s sentencing, Assistant United States Attorney Matthew Podolsky told Gardephe that Avenatti had a “profound lack of remorse” for his conduct.

“It’s about taking advantage of people and abuse of power and trust,” Podolsky said.

“He saw Mr. Franklin as a way to get rich, to get Mr. Avenatti rich.”

Perry said that Avenatti, while pursuing and then obtaining a career in the law, “really did want to be the David fighting the Goliath.”

But, she noted, “He certainly lost his way as he went, and he knows that.”

“I can tell you … he’s a completely humbled man who’s been beaten down, by himself,” Perry said.

Perry also argued for less prison time because of the disparity between how Avenatti was treated with how Geragos has been treated.

“It’s impossible to discern a distinction between Mr. Avenatti’s conduct … and that of Mark Geragos, who they did not charge at all,” said that lawyer, Danya Perry.

“The Nike lawyers on the other side believed that Mr. Geragos was a full participant, and they felt as threatened and extorted from him as they did from Mr. Avenatti.”

The contrast between the tearfully contrite Avenatti on Thursday and the sharp-tongued, Twitter-obsessed lawyer he was in 2018 was dramatic.

Avenatti for months that year blasted Trump and Trump’s former personal lawyer Michael Cohen after disclosures that Cohen paid Daniels the hush money to avoid harming Trump’s chances of winning the White House. Trump denies having had sex with Daniels.

After the hush-money scheme was exposed, Avenatti was a near-constant presence on cable television news shows, where he attacked Trump and Cohen.

Avenatti’s notoriety, and popularity with some opponents of Trump, grew so high that at one point that he flirted with running for the Democratic presidential nomination in 2020.

But the lawyer’s publicity blitz came as he was staggering under millions of dollars in debt, a burden that prosecutors have claimed led him to commit the series of serious crimes for which he was charged in early 2019.

Microsoft will give employees a $1,500 bonus for their efforts during the pandemic

Thu Jul 8 , 2021
Satya Nadella, chief executive officer of Microsoft Corp. Grant Hindsley | Bloomberg | Getty Images Microsoft will give out $1,500 bonuses to many of its employees after more than a year of impact from the coronavirus. The gesture is part of an effort by technology companies to keep employees happy […] 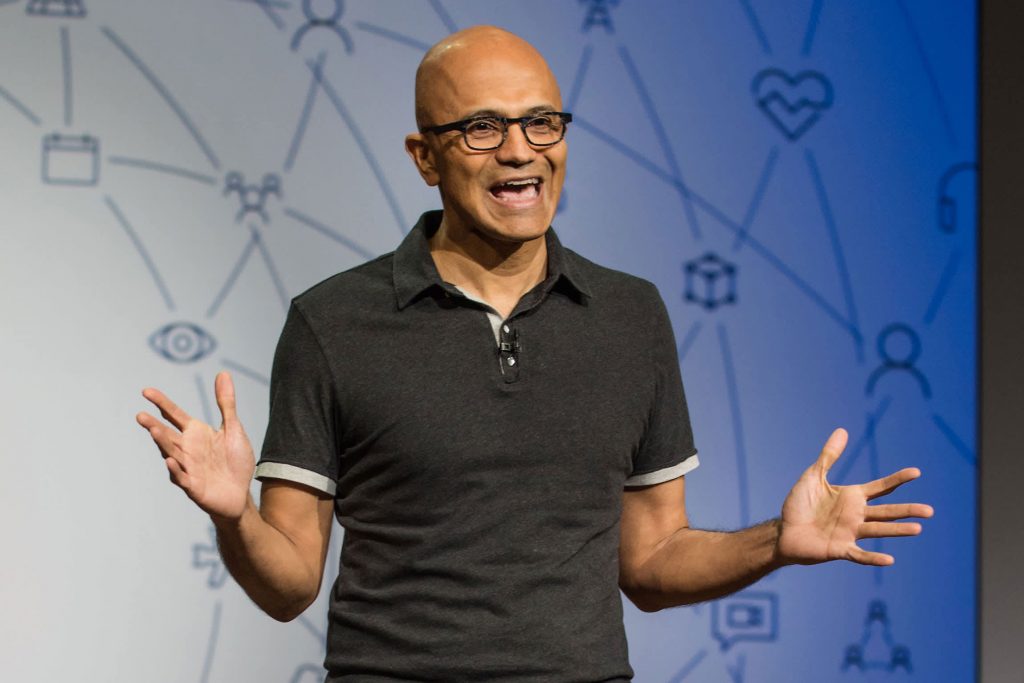