Michael Avenatti, the brash attorney who became a leading foe of then-President Donald Trump, faces criminal sentencing in New York on Thursday afternoon for a brazen botched scheme to extort athletic apparel giant Nike out of up to $25 million.

Avenatti’s troubles won’t end after Manhattan federal court Judge Paul Gardephe sentences him in the Nike case, in which prosecutors have asked a prison term of around eight years. His defense lawyers want him to get just six months in lockup.

Next week, Avenatti is set to begin trial on a raft of charges in California, where prosecutors said he defrauded clients out of millions of dollars. One of those clients was a mentally ill paraplegic.

Avenatti has denied any criminal wrongdoing.

He gained widespread fame, and infamy, for his bombastic representation of Daniels, who says she had sex with Trump once years before he ran for president.

Trump’s then-personal lawyer Michael Cohen paid Daniels $130,000 to keep quiet about her allegations shortly before the 2016 presidential election to avoid harming Trump’s chances of winning the White House. Trump denies having had sex with Daniels.

After the hush money scheme was exposed, Avenatti was a near-constant presence on cable television news shows, where he attacked Trump and Cohen. Avenatti at one point flirted with running for the Democratic presidential nomination in 2020.

But the lawyer’s publicity blitz came as he was staggering under millions of dollars in debt, a burden that prosecutors have claimed led him to commit a series of serious crimes for which he was charged in early 2019.

In the Nike case, Avenatti was convicted at trial of trying to shake down the publicly traded company by threatening in March 2019 to go public with alleged evidence that Nike bribed amateur basketball players and their families.

“I’m not f—ing around with this, and I’m not continuing to play games,” Avenatti told Nike’s lawyers, shortly before his arrest.

Thu Jul 8 , 2021
Quick Take Before a July 5 match against Mexico, some members of the U.S. women’s soccer team turned toward the flag while a World War II veteran played the national anthem on his harmonica. But social media posts mischaracterized their actions by claiming they “turned their backs” on the veteran. […] 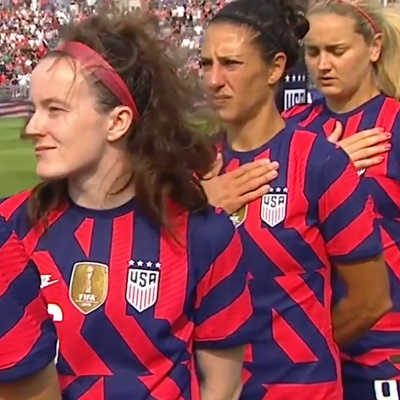