Search and rescue personnel work at the site of a collapsed Florida condominium complex in Surfside, Miami, U.S., in this handout image July 2, 2021.

The demolition of the partially collapsed condominium tower in Surfside, Florida will begin Sunday night, according to Miami-Dade police.

Police said the demolition will take place between 10 p.m. and 3 a.m. Residents in the shelter in place zone should remain indoors effective immediately, police said.

The demolition of the remaining part of the Champlain Towers South condo is planned because engineers deemed it structurally unsound and a danger to workers conducting search-and-rescue efforts for the dozens of people trapped under the rubble in Surfside, Florida.

No one has been rescued since the first few hours of the collapse. The death toll had risen to 24 people as of Saturday, with 121 still missing. Florida Gov. Ron DeSantis, during a news briefing early Saturday, said the state will pay for all costs of the demolition.

Search-and-rescue efforts at the building, which collapsed 10 days ago, were temporarily halted on Saturday afternoon for demolition preparation, which included drilling into the remaining structure’s columns. The search is set to restart once the remaining part of the building is taken down completely.

Officials initially thought a demolition could take weeks. But plans to demolish the remaining structure were quickened amid concerns that Tropical Storm Elsa could hit Florida early next week and further threaten the unstable structure with heavy rainfall and winds.

The demolition was conducted through a technique called energetic felling, which relies on the force of gravity to take down the building with small denotations and confines the collapse to the area of the building.

The cause of the collapse of Champlain Towers South, which was built in the 1980s, is still unknown. However, an engineering consultant filed a report from 2018 warning of cracking and major structural damage below the building’s pool deck.

Mon Jul 5 , 2021
Search and rescue personnel work at the site of a collapsed Florida condominium complex in Surfside, Miami, U.S., in this handout image July 2, 2021. MIAMI DADE FIRE DEPARTMENT | via REUTERS The demolition of the partially collapsed condominium tower in Surfside, Florida will begin Sunday night with search operations […] 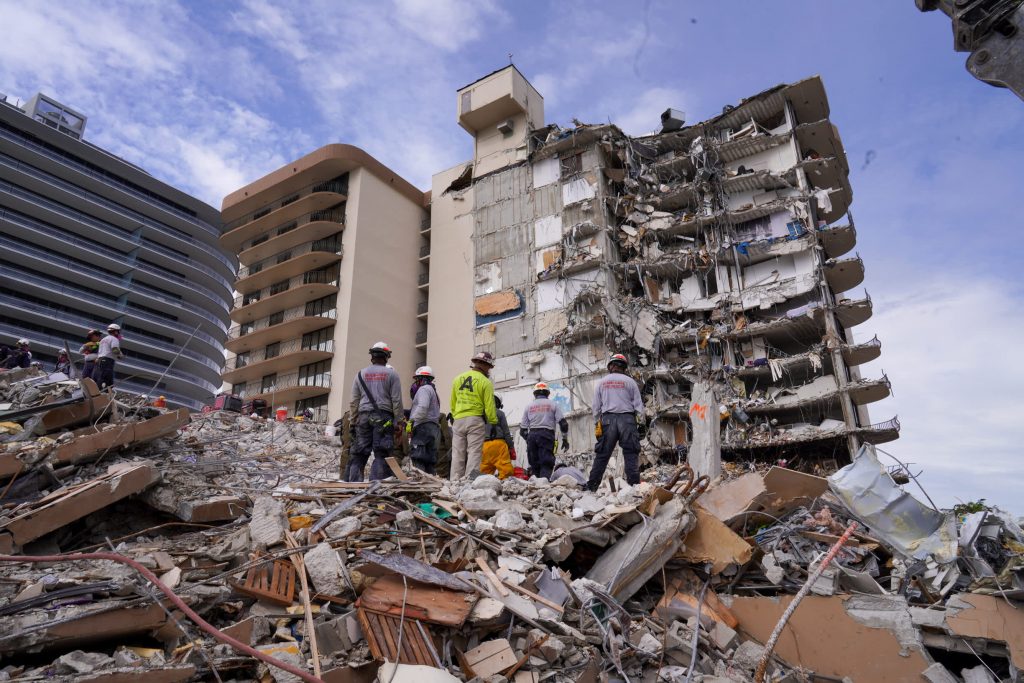