Every sector of the stock market has its winners, and it’s Jim Cramer’s job to help you find them. But sometimes, he finds it more helpful to look at a stock’s power rather than its performance.

“All week we’re rolling out power rankings for each sector of the stock market, just like how gamblers use power rankings to gauge the strength of football teams,” the host of CNBC’s “Mad Money” said Tuesday.

“In stock market terms, your stock performance is like your record — it’s great if you own something that’s up big during the first nine months of the year, but past performance is not necessarily an indicator of future success,” he said.

Hence, Cramer decided to unveil his power rankings for each stock market group. This time, he looked at the consumer discretionary space, which includes a host of non-essential goods and services like apparel, restaurants and entertainment.

First on Cramer’s power ranking was, almost inevitably, the stock of Amazon, which is owned by his charitable trust.

“How could the retail Death Star be anything else?” the “Mad Money” host said, referencing his Star-Wars-themed nickname for the e-commerce giant. “Funnily enough, you’re actually getting a rare buying opportunity here.”

Shares of Amazon down from their recent highs, hovering around the $1,870 level. Cramer pointed out that historically, every sell-off in the company’s stock has been a buying opportunity.

Better yet, for four consecutive quarters, Amazon has delivered earnings well above Wall Street expectations, with its most recent report showing earnings per share that were twice as large as consensus estimates.

“The bull case here was always that Amazon could turn on the profitability spigot whenever they wanted to, it just made more sense for the company to continue to spend the money it needs for growth opportunities. Well, that strategy worked,” Cramer said. “I think the recent correction … [is] a gift.”

TJ Maxx, Marshall’s and HomeGoods parent TJX Companies took second place. Cramer said this stock was also in an attractive position having come down from its recent highs.

“For those of you who don’t remember, TJX belongs to the one retail category that seems to be somewhat immunized against Amazon: the off-price chains,” he said. “When department stores are desperate to get rid of their seasonal inventory that didn’t sell so they can bring in new product, they sell it to companies like TJX for a pittance.”

TJX then sells that inventory to shoppers at exceedingly low prices and pairs it with the treasure-hunt experience so many consumers love, the “Mad Money” host said.

“There are some doubters here, but I think the numbers speak for themselves,” he said. “In the latest quarter, TJX delivered a 6 percent increase in same-store sales — you know that’s the key [retail] metric — and that was much better than the 2.1 percent number that the analysts were looking for. They’re practically coining money here and I bet America’s premier off-price chain is going to have a very good holiday season.”

Third up was Kohl’s, the second-best-performing department store stock for 2018. Shares of Kohl’s, which Cramer’s charitable trust owns, are up 31 percent for the year.

Cramer said his trust has been upping his position in the stock because he expects Kohl’s to perform strongly this holiday season, with the added tailwinds of a strong job market and the Trump administration’s tax cuts.

The company has also rolled out a number of promising self-improvement initiatives, from smarter inventory management to its partnership with Amazon, which allows shoppers to return Amazon items at Kohl’s locations.

“The analysts are forecasting flat same-store sales in the fourth quarter thanks to strong comparisons from last year, and the stock has now pulled back $11 bucks from its highs,” Cramer noted. “Call me a buyer.”

The “Mad Money” host has already come out in favor of Vans, the company’s casual footwear brand, but VF Corp.’s planned spin-off of its denim division and sale of the Reef sandal business could turn it into a real juggernaut, he said.

“Basically, VF Corp. is paring back its non-essential divisions and focusing on their very best brands, creating a lean, mean earnings machine,” he explained. “The transformation will really start to kick in early next year, which is why I think VF Corp. makes so much sense here at the beginning of the fourth quarter.”

No. 5 of Cramer’s power players was the stock of sports apparel giant Nike, which has declined recently after rallying on new product lines, direct-to-consumer sales and the company’s ability to to fend off its competitors.

“Business is booming,” Cramer said. “I liked Nike’s last quarter, but the stock has pulled back 5 percent since then, of course because of the overall market turmoil, and I think the dip is worth buying.”

For investors seeking opportunities in the consumer discretionary space now that consumer spending is on the rise, Cramer’s power ranking — the strongest plays right here, right now — is ripe for the picking.

Tue Oct 9 , 2018
President Donald Trump said on Tuesday his second summit meeting with North Korean leader Kim Jong Un will be held after the U.S. midterm elections on Nov. 6. Speaking to reporters as he flew to Iowa for a political rally, Trump said: “It’ll be after the midterms. I just can’t […] 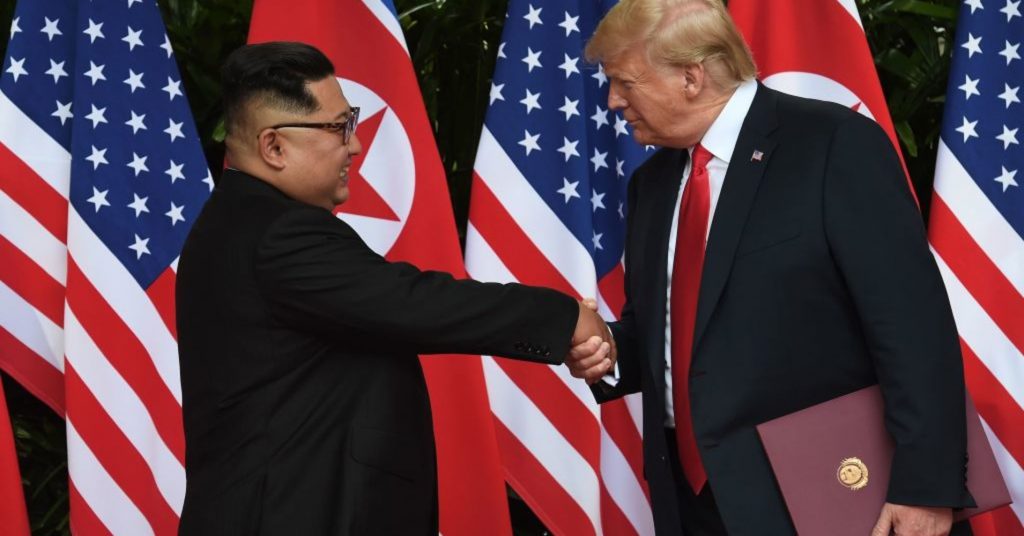