Confirmed coronavirus cases around the world passed 5 million early Thursday as infections continue to accelerate in the Americas. Drugmaker AstraZeneca said it received more than $1 billion from the U.S. Biomedical Advanced Research and Development Authority to develop a vaccine in partnership with the University of Oxford. The company said it will begin first deliveries of doses by September, but it must first prove its potential vaccine is safe for humans and effectively prevents the infection.

10:29 a.m. ET — Amazon is postponing its annual Prime Day event until September, according to The Wall Street Journal.

Prime Day, first launched in 2015, is Amazon’s marquee shopping event and it typically uses the discount celebration to secure new Prime members, as well as to promote its own products and services. The company moved to delay the event because it continues to face a surge of online orders due to the coronavirus.

Amazon’s supply still hasn’t caught up with demand and many household goods are still out of stock or showing delayed shipping times. Brands and sellers have been preparing for Amazon to delay this year’s Prime Day. Reuters reported in April that Amazon would move the event, usually scheduled for July, until at least August. —Anne Palmer

9:41 a.m. ET — Starbucks customers are gradually returning to the chain’s cafes in U.S. and China. The company has regained about 60% to 65% of its U.S. same-store sales over the last week, compared with the same period a year ago, CEO Kevin Johnson wrote in a letter to employees.

Cafes in China have regained about 80% of their same-store sales, according to Johnson.

About 99% of cafes in China have reopened, while more than 85% of U.S. locations are open again with modified hours and operations. —Amelia Lucas

9:37 a.m. ET — Stocks fell slightly as investors digested sharp gains from earlier in the week along with the latest weekly jobless claims data. The Dow Jones Industrial Average traded just 28 points lower, or down 0.1%. The S&P 500 dipped 0.1% as well while the Nasdaq Composite was flat.

Summer driving season is starting, but it’s unclear how many people will hit the road

A customer gets ready to fill his car with gasoline at a Shell gas station in San Francisco, California.

9:15 a.m. ET — Memorial Day is the traditional start to summer, but it’s unclear whether drivers can, or will, take to the road as states reopen.

Gasoline demand is still down about 30% even as all 50 states resume some level of activity. How much drivers fuel up is an important indicator that has been closely tied to employment. U.S. gasoline use is also important for oil prices since American drivers normally count for about 10% of world oil demand each day.

Analysts who are watching the gasoline market are tracking mobility data and traffic congestion data, in addition to traditional supply and demand metrics. The uneven reopening of the economy has made it difficult to assess what fuel demand will be like.

AAA, which normally projects Memorial Day travel, has said it would not make a forecast this year. Forty-three million people traveled last year, according to AAA. —Patti Domm

A vaccine might be ready by early 2021. It’s far from guaranteed

9:08 a.m. ET — U.S. officials and scientists are hopeful a vaccine to prevent the virus will be ready by early next year. But it’s far from guaranteed, scientists warn. The fastest-ever vaccine development, mumps, took more than four years and was licensed in 1967.

Additionally, scientists still don’t fully understand key aspects of the virus, including how immune systems respond once a person is exposed. The answers may have large implications for vaccine development, including how quickly it can be deployed to the public. —Berkeley Lovelace Jr.

More than half of small businesses are looking to have PPP funds forgiven, survey says

9:00 a.m. ET — A National Federation of Independent Business survey found that 80% of businesses polled have applied for PPP loans and 90% have received funding. But while more than half believe they will have all loan expenses forgiven, many are struggling to comply with the law as written.

Nearly half say using the loan in the eight-week window is difficult and the same percentage says it’s challenging to get employee headcount back to where it was precrisis. This comes ahead of a vote in the House of Representatives next week on potential changes to PPP around forgiveness and usage guidelines. —Kate Rogers

In the nine weeks since the coronavirus-induced lockdown shut down large parts of the U.S. economy, some 38.6 million workers have filed claims.

Most Americans will be vaccinated by summer 2021, Morgan Stanley biotech analyst predicts

7:17 a.m. ET — Most Americans will be vaccinated against Covid-19 by the middle of next year, Morgan Stanley biotech analyst Matthew Harrison told CNBC’s “Worldwide Exchange.”

“We’ve talked about spring to summer of 2021 as when we would expect to see the vast majority of the U.S. population vaccinated,” he said, adding that he’s watching Moderna, Johnson & Johnson, AstraZeneca, CanSino and GSK–Sanofi as major players in the race for a vaccine.

A vaccine could be approved for broad distribution sooner, he said, but it will take time for any company to ramp up manufacturing and distribution capacity. Moderna, which is leading the pack, is already building manufacturing and could produce tens of millions of doses by the end of 2020, with that increasing to a rate of 1 billion doses per year by the middle of 2021. —Will Feuer

‘The worst is behind us,’ Italy’s prime minister says

A rider of delivery food Just Eat runs in Piazza Duomo on April 23, 2020 in Milan, Italy.

7:09 a.m. ET — Italian Prime Minister Giuseppe Conte said Italy, which was the first epicenter of Europe’s epidemic, has overcome the worst part of its crisis.

“We can say that the worst is behind us. … We cannot stop to wait for a vaccine, otherwise we would find ourselves with an irreparably compromised society and production system,” Conte told the Italian Parliament, Reuters reported, as the country looks to lift more lockdown measures.

He also warned the public that “now is not the time for parties” after scenes of young people gathering at night in some cities, and also appealed to the public to take their vacations in Italy. —Holly Ellyatt

Graceland is set to reopen

6:42 a.m. ET — Elvis Presley’s Graceland in Memphis, Tennessee, reopens Thursday. The rocker’s home-turned-museum is running tours at 25% capacity, requiring employees to wear face masks and encouraging visitors to do the same. It will also limit restaurants to 50% capacity. “We’re going to lose money for the foreseeable future, but we need to show a path forward,” Joel Weinshanker, managing partner of Graceland Holdings, told CNBC’s “Worldwide Exchange.”  Weinshanker also said Graceland’s workers are ready to return. “People were crying they were so happy” when they found out they were coming back, he added. —Matthew Belvedere

Home sales dropped nearly 18% in April, while decline in inventory pushed prices to a record high

Thu May 21 , 2020
A For Sale sign is seen in front of a home in Miami, Florida. Joe Raedle | Getty Images The economic fallout from the coronavirus hit the housing market hard in April. Sales of existing homes fell 17.8% month-to-month, and were 17.2% lower than April 2019, seasonally adjusted, according to […] 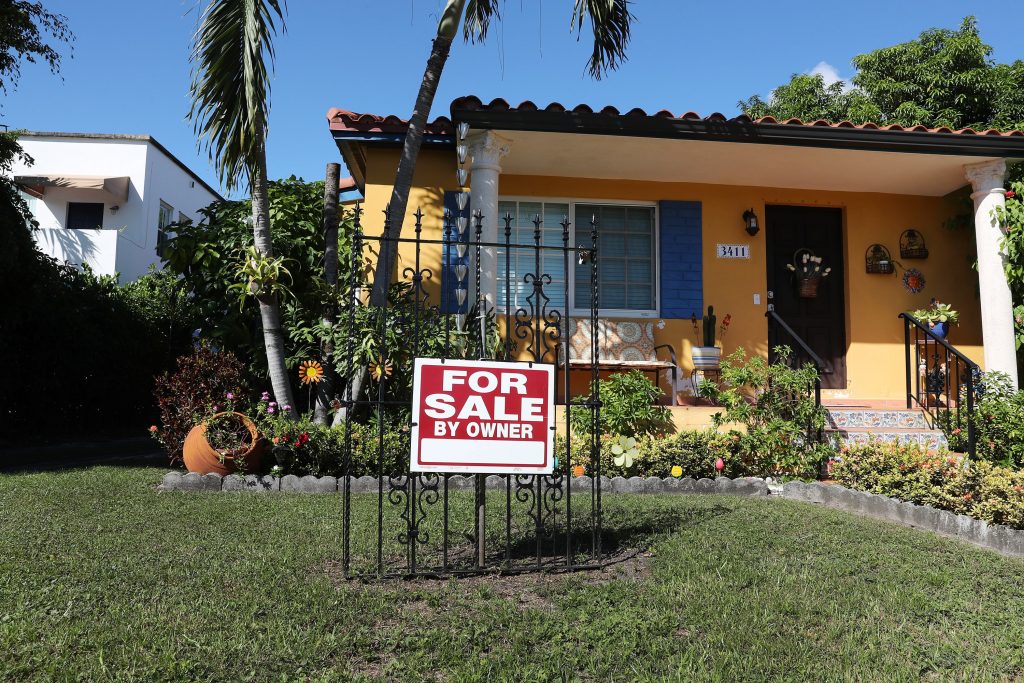