Momentum is building at the White House for another round of stimulus checks, with President Donald Trump saying this week, “I think we’re going to be helping people out” and “getting some money for them.” A number of issues need to be negotiated in Congress about what form the next relief package takes, but the Republican-held Senate has started to open the door to a more narrow aid proposal.

Coronavirus cases in Brazil continue to climb rapidly and on Saturday the country had the second-highest number of reported cases in the world until Russia surpassed it with its latest numbers. South America is now an epicenter for the pandemic, the World Health Organization said Friday, and Brazil is the hardest hit with more than 330,000 cases and at least 21,000 deaths.

A person disinfects an elliptical machine at a gym in New Orleans, Louisiana, on Saturday, May 16, 2020. Louisiana entered its phase 1 of reopening on Friday after Governor John Bel Edwards loosened restrictions on certain business in the state.

10:46 am ET — As a handful of states begin to ease restrictions put into place to control the spread of the coronavirus, states like Texas, Florida, Georgia and Arizona have given gyms the green light to resume operations with reduced occupancy and expanded health precautions.

Joe Cirulli, the founder of Gainesville Health and Fitness in Florida, said he’s spent thousands of dollars in enhanced cleaning and sanitation practices for his chain of gyms, such as extra electrostatic cleaning supply to spray workout equipment daily and enough hand sanitizer and wipes to place throughout the entire gym.

Health experts warn, however, that the coronavirus still has room to spread.

While the transmission of the virus may be manageable by wiping down surfaces, Cindy Prins, an associate professor of epidemiology at the University of Florida, said that people coughing into the air in a shared space like a gym or restaurant could spread Covid-19.

“I think we need to remember that this is primarily a virus spread by airborne droplets that we breathe out in the air,” Prins said. “I miss the gym, I really want to go back. I’m not comfortable yet with that.” —Noah Higgins-Dunn

People sit on the sand at a public beach in Dauphin Island, Alabama, U.S., on Friday, May 1, 2020. Alabama lifted their stay-at-home order and have allowed most businesses to open, subject to sanitation and social-distancing guidelines, Alabama Media Group reported.

10:28 am ET — Alabama Gov. Kay Ivey called for “personal responsibility” as the state has reopened much of its economy while pushing residents to continue health precautions, but leaders are struggling to get the public to buy in, the Associated Press reports.

In the state’s most populous area, Jefferson County, officials said increasing cases and hospitalizations have led to the need for tighter rules than those set by Ivey, according to the AP.

New daily cases in the state have risen to 307 from 268, according to an AP analysis of testing data from The COVID Tracking Project, and the rate of daily tests coming back positive has increased from 6.7% to 7.5%. The AP used seven-day rolling averages to account for daily variability in the testing data.

In many public places it is rare to see a covered face, the AP reported.

“As I’ve gone out to some of these retail stores, I’ve noticed that people are not wearing masks,” said Dr. Rachael Lee, an infectious diseases expert with the University of Alabama at Birmingham, according to the AP. —Chris Eudaily

But with government officials urging Americans to continue social distancing and stay close to home, consumers are unlikely to spend as much on alcohol as last year.

“I’m sure that there’s going to be some drop in sales,” Euromonitor International research analyst Aga Jarzabek said in an interview. “It’s going to be much lower than last year, but I wouldn’t be surprised if it’s still a pretty huge spike for Memorial Day.”

The alcohol industry is already reeling from the closures of bars and restaurants, although many consumers shifted to buying their beer, wine and spirits in stores or online. —Amelia Lucas

Here’s why guidance from scientists has changed throughout the pandemic

9:28 am ET — Scientists have changed their minds as new evidence has come to light amid the coronavirus pandemic. But many fear that it’s making them seem unreliable, making it less likely that the public will follow their recommendations.

However, science communicators say that it’s “part of the process” for thinking and best practices to evolve over time, particularly in a situation when the virus is so new.

Vinay Prasad, a hematologist-oncologist and associate professor of medicine at the University of California San Francisco, said that the best scientists are “continually re-evaluating themselves to see what we got right and what we got wrong.”

9:08 am ET — British Prime Minister Boris Johnson has defended the actions of Dominic Cummings, a key aide, who drove 250 miles during lockdown with his wife who had symptoms of Covid-19.

It transpired Saturday that Cummings — the advisor behind the successful Brexit campaign — drove from London to Durham, in northern England, at the end of March so his son could be cared for by family if he and his wife got ill. The trip took place after Johnson announced the start of strict coronavirus lockdown measures from March 23.

Opposition parties have called for Johnson to sack Cummings.

On Saturday, a spokesman for Johnson said Cumming’s wife has symptoms of the coronavirus at the time of the journey, and there was a “high likelihood” Cummings would also get ill.

As such, the spokesman said that Cummings did not break lockdown guidelines.

Protests break out in Spain over lockdowns, government’s handling of the pandemic

Demonstrators take part in a “caravan for Spain and its freedom” protest by far-right party Vox in Barcelona on May 23, 2020. The left-wing government’s management of the crisis has drawn a barrage of criticism from right-wing parties who have denounced its “brutal confinement”. (Photo by Pau Barrena / AFP) (Photo by PAU BARRENA/AFP via Getty Images)

8:44 am ET — A procession of thousands of vehicles drove through Madrid Saturday, honking, waving Spanish flags and protesting against the country’s coronavirus lockdown, Reuters reported.

The far-right Vox party called for the protest, according to Reuters, where demonstrators called for Prime Minister Pedro Sanchez and Deputy Prime Minister Pablo Iglesias to resign over the handling of the pandemic and the damage to the economy.

“It is time to end the #stateofabuse that Pedro Sanchez and Pablo Iglesias are using to gag Spaniards,” Vox said in a statement, according to Reuters.

Spain instituted some of the toughest lockdown measures in Europe, and though the country has eased some restrictions, Madrid and Barcelona have continued restrictions due to bigger outbreaks, according to Reuters.

A speech by Vox leader Santiago Abascal was broadcast on EsRadio so people could listen in their cars, Reuters reported. He said the government was “directly responsible for the worst management of this crisis on the entire planet.” —Chris Eudaily

Some Uber, Lyft drivers fear companies will use unemployment benefits against them 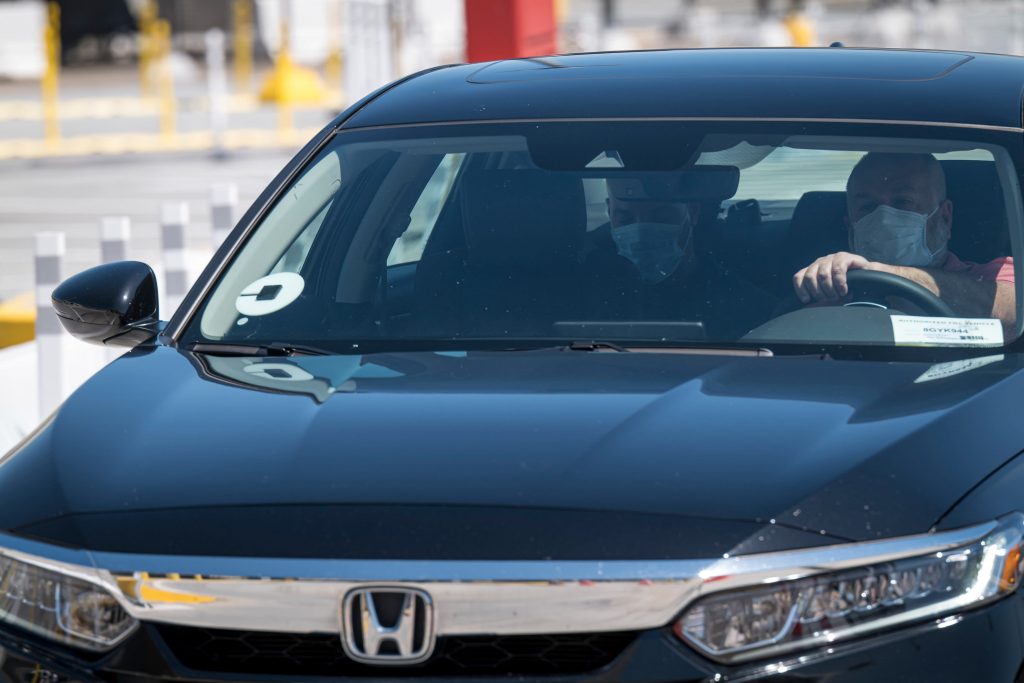