The MTV Video Music Awards — a night full of music, camera flashes and fans screaming for their favorite artist — got off to a rocky start, as Conor McGregor and Machine Gun Kelly getting into a heated exchange on the red carpet before the show even started.

McGregor spoke with ET backstage and described the interaction as “absolutely nothing.”

“Nothing happened with me, I only fight real fighters, people that actually fight, you know what I mean,” he continued. “I certainly don’t fight little vanilla boy rappers. I don’t even know the guy. I don’t know anything about him, except that he’s with Megan Fox.”

An eyewitness told ET that McGregor and MGK “exchanged some words” and then McGregor lunged at the musician. MGK and Megan Fox then left the red carpet and threatened not to pose for photos. However, according to eyewitnesses, the pair returned once McGregor left.

McGregor was seen throughout the night walking with a cane due to the fractured leg he suffered in his last fight. The MMA fighter later presented the award for Artist of the Year while Machine Gun Kelly performed his song “Papercuts” near the end of the show.

Entertainment Tonight and MTV are divisions of ViacomCBS.

Mon Sep 13 , 2021
The MTV VMAs returned to Brooklyn with performances by some of the biggest stars both old and new, with Lil Nas X taking home the top prize of Video of the Year. Justin Bieber and Olivia Rodrigo were the other big winners of the night.  “First I wanna say thank […] 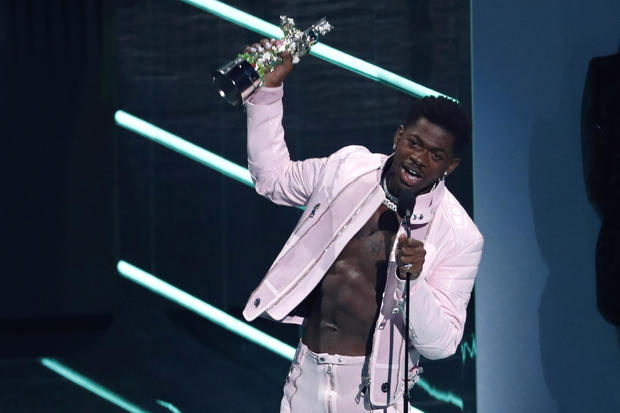