Joe Biden was on track to be confirmed Thursday morning by Congress as the next president of the United States after the Senate and the House of Representative overwhelmingly rejected challenges to his Electoral College ballots from Arizona and Pennsylvania.

Biden is expected to be confirmed as president-elect when Vermont’s electoral votes are opened later Thursday morning during a joint session of Congress, putting the former Democratic vice president over the threshold of 270 Electoral College votes needed to win the White House.

But that proceeding was interrupted for about six hours by a mob that stormed the Capitol and breached its buildings in anger over President Donald Trump‘s loss in the election, and their belief that he was the victim of ballot fraud.

The count resumed at about 8 p.m. ET Wednesday, after a woman who was among the invaders was shot and killed during the riot by Capitol Police, and three other people died from medical emergencies.

The leaders of both the Republican and Democratic caucuses in the Senate vowed when they resumed proceedings that Congress would confirm Biden’s election “tonight.”

Vice President Mike Pence arrives to preside over a joint session of Congress at the U.S. Capitol in Washington, D.C., January 6, 2021.

During the night, both chambers of Congress met separately to debate and then vote on objections by Republicans to the Biden electors from Arizona, and then from Pennsylvania.

More than 100 Republican House members voted for the objections to both states’ electors, but those voters were easily defeated by the more than 280 votes against the measures.

Before the riot, there were concerns it could take many hours, or even days, to confirm Biden won the Electoral College with 306 votes to Trump’s 232 because of expected objections to individual states’ electors by some Republican senators and House members.

Those objections were based on claims by Trump and others that he was swindled out of winning a second term because of widespread ballot fraud in a handful of battleground states, a claim for which there is no credible evidence.

There was no expectation, however, that Biden ever would be denied his ultimate victory, because it would take a majority in both chambers of Congress to reject a state’s electors.

Democrats control the House of Representatives, guaranteeing that they would defeat any challenge in that chamber.

In the Senate, the effort is doomed because while Republicans still hold a slim majority there, many GOP senators were opposed to overturning the election results from any state.

Sen. Kelly Loeffler, R-Ga., who lost a special election Tuesday night, said on the Senate floor before the vote that she would not object to counting of votes for Biden, despite having said earlier this week that she would do so.

“The events that have transpired today have forced me to reconsider, and I cannot now, in good conscience, object,” Loeffler said, referring to the riot.

After the challenge to Arizona’s electors failed in the House, senators went to the House to resume the process of Vice President Mike Pence presiding over the opening of ballots from individual states, and asking if there were any objections to the results.

It takes just one House member and one senator to challenge a state’s results, triggering up to two hours of debates in the chambers separately.

House members’ objections to Biden electors from Georgia, Michigan, and Nevada — all of which were crucial to his victory — failed to delay the count, because no senator joined in objections for those states.

House Speaker Nancy Pelosi, D-Calif., in a letter to colleagues said that the decision to quickly resume counting votes on the heels of the riot was made in consultation with political leaders including Pence.

“Our purpose will be accomplished,” Pelosi said as she reconvened the House’s session, about an hour after the Senate resumed its own proceedings.

“Today was a dark day in the history of the United States Capitol,” Pence said as he opened the session in the Senate.

“We condemn the violence that took place here in the strongest possible terms,” said the vice president, who previously served as a congressman from Indiana.

“The violence was quelled, the Capitol is secured, and the people’s work continues,” Pence said.

“We are back at our posts, we will discharge our duty,” McConnell said. “We assembled this afternoon to count our citizens’ votes, and to formalize their choice of president.”

“We will certify the winner of the 2020 presidential election,” he concluded.

Minority Leader Chuck Schumer, D-N.Y., blasted Trump, whom he called “undoubtedly our worst president,” and whom he said “bears a great deal of the blame” for the riot.

“This mob was in good part President Trump’s doing,” said Schumer. “His responsibility, his everlasting shame.”

Schumer compared the invasion of the Capitol complex by a horde of people to the Japanese attack on Pearl Harbor on Dec. 7, 1941, saying Jan. 6, 2021, will be another “day of infamy” in American history.

“This temple of democracy was desecrated,” he said. “This will be a stain on our country, not so easily washed away.”

“We will begin the hard work of repairing the country tonight.”

Rioters were recorded walking the halls of the government building, entering politicians’ offices and occupying the Senate chamber.

Thu Jan 7 , 2021
Washington —Vice President Mike Pence announced just after 3:40 a.m. Thursday that President-elect Joe Biden had won the presidency after Congress completed the counting of the Electoral College votes. What was largely seen as a perfunctory last step before Mr. Biden’s inauguration had turned into a day of chaos after […] 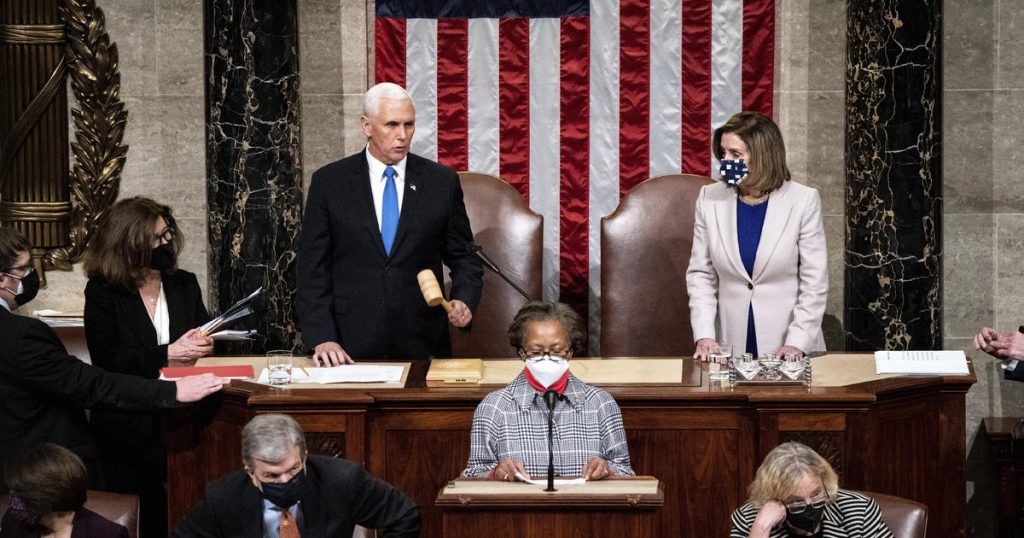