WASHINGTON — Corporations and industry groups have donated at least $170 million in recent years to Republicans who rejected President-elect Joe Biden’s victory over President Donald Trump, according to a new report by a government watchdog group.

The report by Public Citizen examines corporate and trade association contributions made since the 2016 election cycle to the 147 members of Congress who, at Trump’s behest, last week objected to the certification of November’s election.

Giving by such trade groups and corporate PACs has come under intense scrutiny in the wake of the deadly insurrection by Trump supporters, who stormed the Capitol to stop the vote. Many companies have since said they will avoid making donations to members of the House and Senate who voted to overturn Biden’s win.

Other companies have temporarily postponed political giving to both political parties.

The amount of giving by corporate PACs and trade groups to individual candidates is limited to $5,000 per candidate each year, thus making up a small portion of each candidate’s overall cash haul. But data reviewed by Public Citizen, which was provided to The Associated Press before the report’s release later Wednesday, shows that when looked at more broadly, corporate giving still accounts for a significant stream of campaign cash, particularly to the Republicans in the House.

The top corporate and industry givers to the 147 Republicans detailed in the report include:

— $2 million by the National Association of Realtors. In an email, the group said it is “temporarily pausing” all federal contributions and will “closely monitor events in Washington in the days and weeks ahead in order to ensure our political participation most closely represents the will of our REALTOR members.”

— $2 million by the National Bankers Association. The group says it’s reviewing its practices, but hasn’t made any decisions on how it will move forward.

— $1.8 million by the National Beer Wholesalers Association. The group did not respond to a request for comment.

Others prolific givers featured in the report include AT&T, Comcast, Exxon Mobil, Boeing and Lockheed Martin.

AT&T and Comcast both suspended contributions to those who voted to overturn the election. Exxon Mobil says it’s reviewing its political giving. Spokesmen for Lockheed Martin and Boeing declined to comment.

Nineteen of the PACs listed in the report each contributed at least $1 million over the past three cycles to congressional Republicans who voted to overturn the election. Meanwhile, 46 of the PACs gave to at least half of the Republican objectors, the report found.

Tanglis, the report’s co-author, and other campaign finance experts say the big question about the donations is whether companies and trade groups will stick by their pledges.

“You have to wonder if in three months they will start to back up,” Tanglis said. “For the most part, we’re not really into the next election cycle. They could very easily take six months or the whole year off and start up again in 2022.”

Pelosi calls Trump 'clear and present danger to the nation' during impeachment debate, thanks National Guard

Wed Jan 13 , 2021
U.S. House Speaker Nancy Pelosi, D-Calif., stands in front of a National Guard troop as she speaks, on the East Entrance of the US Capitol in Washington, DC, on January 13, 2021. Oliver Contreras | SIPA | AP There’s no Confederate flag there now. National Guard troops protected Congress on […] 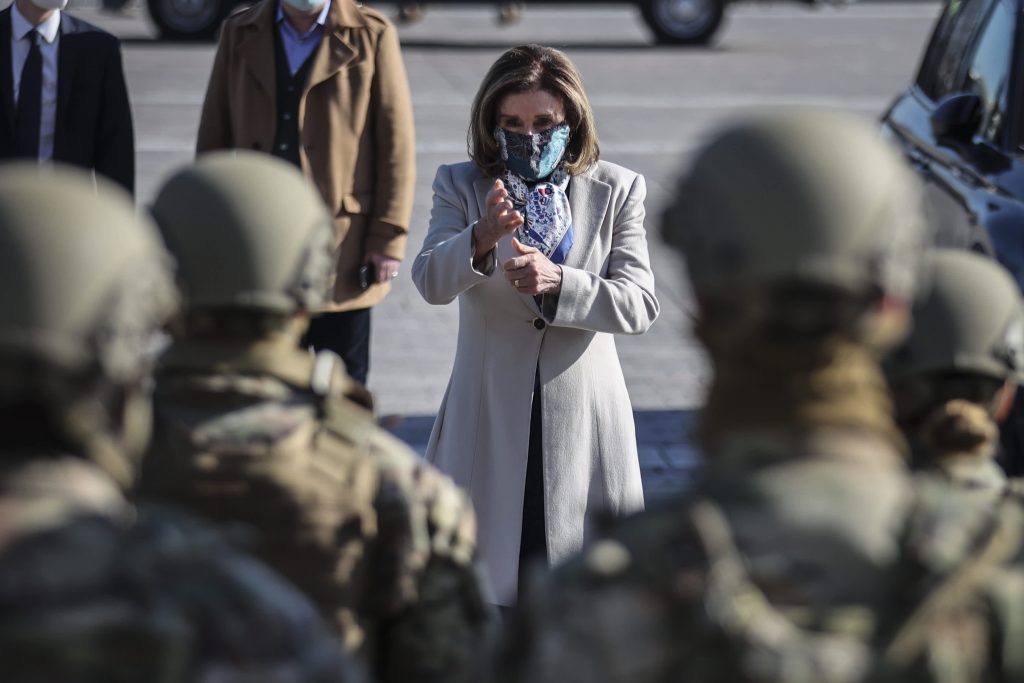