Colorado last week became the first state in the nation to release a draft of their new congressional lines, after the reapportionment from the 2020 Census.

Both parties have been watching Colorado, one of six states that is adding a seat under apportionment because its population has increased, and its new independent redistricting commission. The state is one of four that’s relying on an independent commission to draw the district lines, rather than allowing the partisan state legislature to do so.

It’s the first time in state history, an independent commission of 12 citizens (with four Democrats, four Republicans and four unaffiliated voters) will be in charge of drawing Colorado’s congressional and legislative maps for the next decade.

Democrats and Republicans alike are trying to figure out how removing partisanship from the district-drawing process will affect their chances of picking up —  or losing —  House seats in the 2022 elections.

Overall, the preliminary map looks favorable for Democrats in Colorado, where President Biden won by more than 13 points and the party held on to four of the seven Congressional seats. While the new map would shore up Republican Lauren Boebert‘s 3rd District by not including the Democrat-leaning Pueblo County, it also seems to bode well for incumbent Democrats in the 2nd and 6th Districts.

The state’s new 8th District was drawn in the Democratic-leaning north Denver suburbs. The 7th District, currently held by Democrat Ed Perlmutter, will be slightly more competitive and includes suburban counties south of Denver that have voted Republican  — though Mr. Biden still would have won the 7th under this draft version by 10 points.

On July 9, community hearings regarding the map will begin. Official redistricting data from the Census Bureau will be coming in mid-August that’ll help make the lines more precise.

The commission said in a memo that it adhered to the Constitution in creating districts, making an equal population count among the districts the priority over creating the most politically competitive seats.

“If they’re maximizing competitiveness, they’re going the wrong way,” said Adam Kincaid, executive director of the National Republican Redistricting Trust. “My concerns with these independent commissions nationally are the same concerns that we’ve had from the beginning, which is that they seem to be set up in a way that’s open to manipulation, particularly from the left.”

“We worked so hard to make it so that we wouldn’t have an overly partisan, even skullduggerous process with the way in which we’re doing our political maps,” Democratic Congresswoman Haley Stevens of Michigan told CBS News about Proposal 2.

Democrats pushed for nationwide independent commissions in the now-stalled “For the People Act,” known in the House as HR1 and the Senate as S1. Democrats argue that leaving it up to an outside group, instead of state legislatures, to set the lines would create a fairer process and end partisan gerrymandering when the party that controls the creation of the district draws lines to its advantage.

“We’ve supported reform efforts on ballots and in state legislatures to create independent citizen-led redistricting commissions… the For The People Act is a necessary reform to protect the right to vote and to protect our democracy,” former Attorney General and chair of the National Democratic Redistricting Committee Eric Holder said at a virtual fundraising event on Monday.

While more states have passed reforms or established independent commissions since the last census in 2010, 25 states are under one-party control for the redistricting process. Republican legislatures will be in charge of drawing 181 districts, while Democrats control lines in 76, according to the NDRC.

Michael Li of the Brennan Center said a big difference between independent commissions and state legislators being in charge of drawing lines is the transparency and avenue for public input.

“States like Texas, Georgia, other places where legislatures draw maps, they have an idea of what they want to do, but they’re keeping it close to the vest and it’s almost like a big secret. People won’t know until much later in the process, which is the opposite of what it should be,” he said.

Jolie Brawner, vice chair of the Colorado Congressional redistricting commission, said the commission has gotten about 1,000 comments, emails or letters this year. They’re planning to tour each district, in person where possible, and hold open meetings.

“I think it’s a great idea to kind of shake up how we’re drawing our congressional and legislative maps, because a lot of times this whole process is very cloak and dagger-y,” said Browner, an unaffiliated party member of the commission that supports every state adopting an independent commission.

“People feel disconnected from their representatives constantly, they feel like Washington is a far place, or they feel like they don’t have access to the State House or they don’t know how this process works. The best thing about this process being done by an independent commission is we are super transparent. It makes government seem less nebulous.”

Mon Jul 5 , 2021
Jemele Hill on Sha’Carri Richardson’s suspension, Olympic rules and fallout at ESPN – CBS News<!–http://vidtech.cbsinteractive.com/avia-js/1.6.0/player/avia.min.js http://vidtech.cbsinteractive.com/avia-js/1.6.0/plugins/ui/avia.ui.min.js –> Watch CBSN Live Jemele Hill, a contributing writer at The Atlantic and host of “Jemele Hill, is Unbothered” at Spotify, joins “CBS This Morning” to discuss if the rules at the Olympics are […] 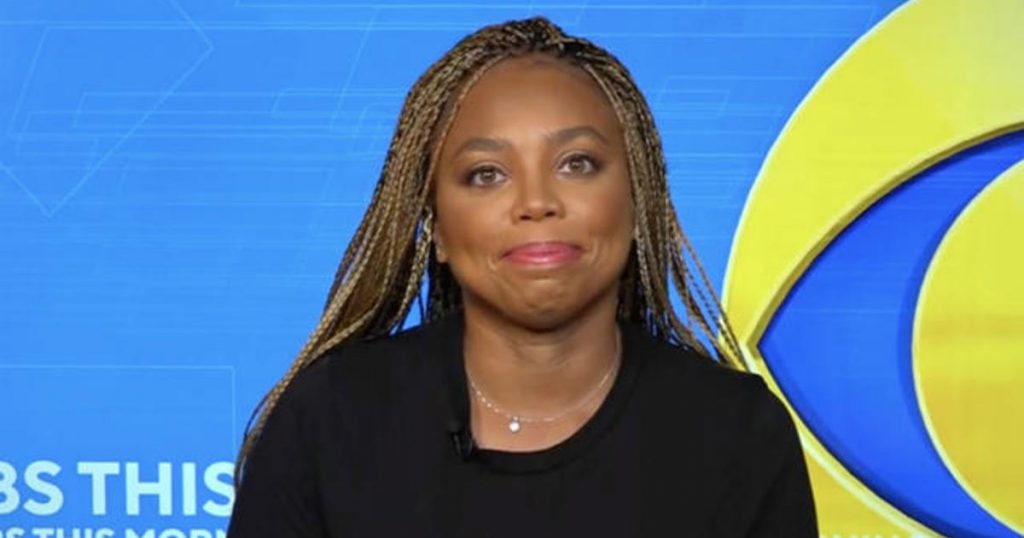