A data input error that briefly showed an unusually large uptick in votes for Joe Biden in Michigan prompted suspicions online and an unfounded claim of voter fraud. The error came down to a typo by a county’s reporting that was quickly corrected.

As election results poured in early Nov. 4, conservative accounts on social media heavily pushed a faulty claim that a large “trove” of ballots in Michigan was “found” and that they all went to former Vice President Joe Biden.

But in reality, the numbers cited were the result of a typo that was made by a Michigan county as it reported unofficial results. It was quickly corrected.

A website with a history of spreading misinformation, Gateway Pundit, ran a headline reading, “Voter Fraud in Michigan – Massive Dump of Over 200,000 Ballots for Biden All the Sudden Appear Overnight.” It was shared nearly 2,500 times on Facebook, according to analytics data from CrowdTangle.

President Donald Trump also amplified a post insisting the purported spike in votes for Biden required court intervention. “WHAT IS THIS ALL ABOUT?” Trump wrote.

The underlying claim amplified by Trump came from a GOP consultant, Matt Mackowiack, who shared screenshots of an interactive map of election results in Michigan depicting Biden climbing nearly 140,000 votes while Trump and others remain stagnant. The map, which appears on Buzzfeed News, is powered by the election data-gathering firm Decision Desk HQ.

Mackowiack later corrected the record and tweeted: “This tweet was taken and share honestly. I have now learned the MI update referenced was a typo in one county. I have deleted the original tweet.”

Decision Desk HQ said in a statement that the error arose because of a clerical error.

“This morning there was a clerical error in the Shiawassee, MI county presidential data,” the firm wrote on Twitter. “Once we identified the error, we cleared the erroneous data and updated it with the correct data as provided by officials. We stand by our data as reflected on https://results.decisiondeskhq.com.”

And Abby Bowen, elections clerk in Shiawassee County, told us by phone that the error came down to a typo.

“There was a typo in the initial report that went out to the Bureau of Elections. It was caught in a very short amount of time and quickly corrected,” Bowen said. “There was an extra 0 added on the end when Biden’s votes were keyed in.”

On Twitter, live updates from Decision Desk HQ showed that between 5:04 a.m. and 5:43 a.m. — as additional votes in Michigan came in for Trump — Biden’s numbers were updated and actually dropped by 110,796.

Shiawassee County Clerk Caroline Wilson told us she was responsible for the error. “Nothing was jeopardized in any fashion,” she said. “It was clearly a human error.”

Bowen emphasized that “everything that gets reported on election night is unofficial” and that a routine county canvass will be done to further verify vote tallies before they become official.

“This is why we have the checks and balances,” she said. “This is no kind of voter fraud. It was literally just a typo.”

J. Alex Halderman, a University of Michigan professor of computer science and engineering who is co-chair of the Michigan Election Security Advisory Commission, said “this kind of error is fairly common. Preliminary results are sometimes updated manually, for instance by copying and pasting from a spreadsheet.”

Also, Halderman said in an email to FactCheck.org, the advisory commission has recommended that Michigan conduct a risk-limiting audit following the election, as it did following the primary election; the state began piloting the audits in 2018.

“[A]ssuming that Michigan performs a risk-limiting audit, as it did in the primary, voters won’t have to simply take on faith that these results are accurate,” he said. “The RLA will publicly demonstrate whether the outcome reflects what’s on the paper ballots.”

Later in the day, the Trump campaign alleged that it did not have “meaningful access” to some areas where ballots were being counted in Michigan and said it was filing a lawsuit in an attempt to halt the counting of ballots.

Decision Desk HQ (@DecisionDeskHQ). “This morning there was a clerical error in the Shiawassee, MI county presidential data,. Once we identified the error, we cleared the erroneous data and updated it with the correct data as provided by officials. We stand by our data as reflected on https://results.decisiondeskhq.com.” Twitter. 4 Nov 2020.

Bezos sells more than $3 billion worth of Amazon shares

Wed Nov 4 , 2020
Amazon CEO Jeff Bezos Alex Wong | Getty Images Amazon CEO Jeff Bezos this week has sold more than $3 billion worth of shares in his company, according to filings with the Securities and Exchange Commission compiled by OpenInsider. Bezos has accelerated his stock sales in the last year. In […] 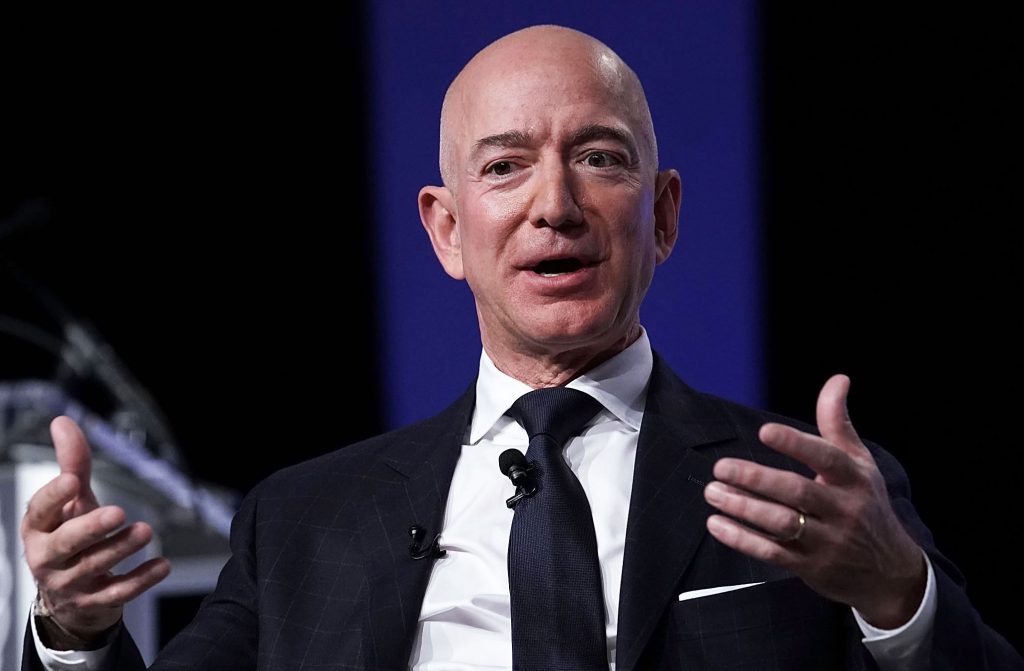