In his first television interview, former Immigration and Customs Enforcement spokesperson James Schwab has opened up about why he abruptly resigned in March. But his interview with CBS News’ Jamie Yuccas on Wednesday was unexpectedly interrupted by agents identifying themselves as agents from the Department of Homeland Security Inspector General’s Office.

“They just said that they wanted to talk to me about the leak with the Oakland mayor,” Schwab said of his conversation with the agents.

Before the surprise visit, Schwab told Yuccas that both the Obama and Trump White Houses asked him to “spin” information. But he said he felt compelled to resign after the current administration told him to lie about an incident that pitted the government against Oakland’s mayor.

Back in February in the month leading up to Schwab’s resignation, tensions in the San Francisco Bay area were running high over a series of raids carried out by federal agents with ICE. With the guidance of his superiors in Washington D.C., it fell to Schwab to communicate with journalists about those raids. The day before the operations took place, Oakland Mayor Libby Schaaf warned the community about the operation — a surprise to Schwab.

“She was putting your officers’ lives, potentially, in danger?” Yuccas asked Schwab. “Correct,” he replied.

“We ended up arresting 232, which is 16 percent higher than our highest estimates. So internally, that was considered a success….But what they publicly said was that she let people go,” Schwab said. According to him, that was not true.

He helped craft a statement to the media saying, “Some of them were able to elude us thanks to the mayor’s irresponsible decision.”  He was comfortable with that statement, he said, because it included the words “some of.”

“This is a spin statement. This is what every public affairs officer does,” Schwab said.

When reporters asked him to clarify the discrepancy, Schwab said he was instructed by his superiors in Washington to simply refer to the original statement he drafted without disputing Sessions’ version of events.

“After they failed to correct it – it’s a flat-out lie. They know it’s a lie. It was just shocking to me that no one wanted to fix that,” Schwab said.

Troubled by what he saw as public deception, Schwab turned in his resignation.

“I could not fathom staying at an organization that was OK with lying to the American public. I hate that. In 17 years in the military, at the Department of Defense as a civilian, at NASA, and now at Homeland Security, I have never been asked to lie. I have neverbeen asked to perpetuate a lie, which is the same as lying,” Schwab said.

During the interview at his home, some three months after he quit, Yuccas and Schwab were interrupted by a surprise visit from men who said they were agents from the Department of Homeland Security Inspector General’s Office. He was “completely shocked” to see them.

Schwab said his conversation with the agents had to do with Oakland’s mayor.

“Did you ever contact the Oakland mayor’s office?” Yuccas asked.

Schwab said it was “absolutely” an intimidation technique.

“Why, three months later, are we doing this?” Schwab said. “This is intimidation. And this is why people won’t come out and speak against the government.”

Asked if he believes other agencies are struggling with the same thing, Schwab said, “I know that they are, because they’ve reached out to me.”

Schwab said he’s speaking out now because he’s talked to others in the federal government with similar concerns.

“That’s one of the most important reasons that I’m doing this is that – so that people hear that someone else stood up, that someone else said, ‘No.’ And was concerned with it…To actually prepare and stand out in front of the public and perpetuate something that you know is absolutely false is not okay. And no special agent from the Department of Homeland Security is gonna stop me from saying that,” Schwab said.

CBS News reached out to ICE. They say they disagree with Schwab’s claims he was ordered to lie, but do believe the Oakland mayor’s warning helped targets evade arrest. The DHS did not get back to CBS News about any investigations into who leaked details about the raid. Although Schwab is a registered Democrat, he says it has nothing to do with his decision to resign, and to speak out.

As Tesla ramps up production of its Model 3s, Panasonic warns of battery cell shortages

Thu Jun 28 , 2018
A pickup in production of Tesla’s Model 3 cars, after earlier delays, has resulted in occasional battery cell shortages, a Panasonic official said on Thursday in a sign Tesla is in overdrive to meet its end-June forecast. Silicon Valley tech billionaire and Tesla Chief Executive Elon Musk earlier this month […] 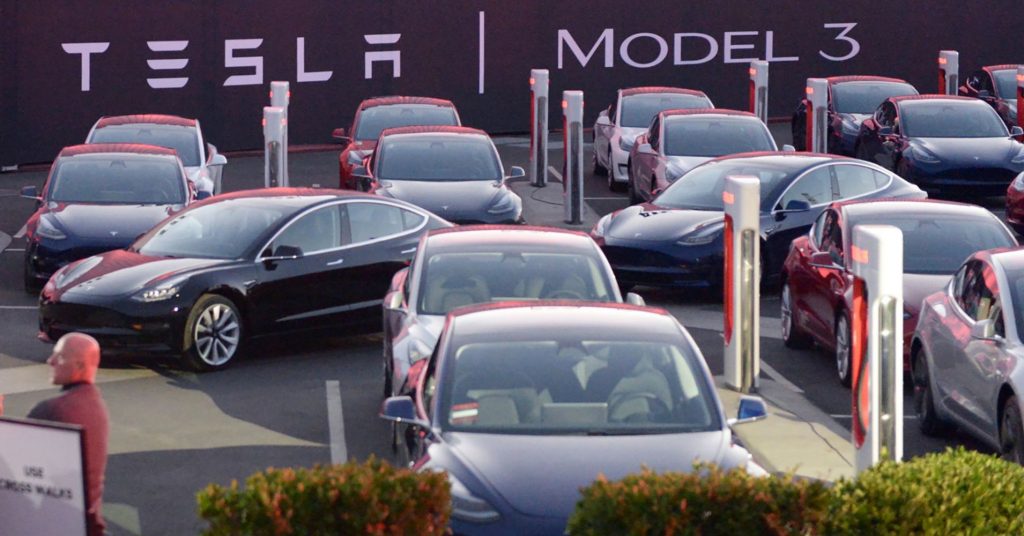