BARCELONA (Reuters) – Catalonia should hold a new vote on independence from Spain within two years, the head of the region’s government said on Thursday in a fresh challenge to Madrid following days of unrest by pro-separatist protesters.

Nearly 100 people were injured across the northeastern region on Wednesday in a third day of violence after Spain’s Supreme Court sentenced nine Catalan leaders to lengthy jail terms over their failed effort to secure independence in 2017.

Cars and rubbish bins were torched in the Catalan capital Barcelona overnight and police said they had arrested 12 people in the city in some of the worst violence seen in Spain in years, which has sent a shockwave through national politics.

The Interior Ministry said it would send in reinforcements with further protests planned for Friday, when unions have called a strike and protesters from around the region are due to converge on Barcelona, one of Europe’s top tourist cities.

Addressing the Catalan parliament, pro-independence regional chief Quim Torra criticized the rioting, saying the separatist cause was a peaceful movement.

But he also pushed the case for forging ahead with the stalled secessionist drive, saying there was “no way” that any court would prevent him from taking steps towards independence.

“If all parties and groups make it possible, we have to be able to finish this legislative term by validating independence,” said Torra, adding that Monday’s sentences would not deter separatists from holding a new referendum. “We’ll return to the ballot box again on self-determination,” he said.

Torra called for a constitution to be drawn up for Catalonia in the spring of 2020, which could open the way for a ballot before the regional parliament’s term expires in December 2021.

Spain’s main parties have consistently refused to hold an independence referendum in Catalonia, although the ruling Socialists say they are open to dialogue on other issues.

The Constitutional Court warned Catalan officials on Wednesday of legal consequences if they broke the law by pursuing independence.

Catalonia is a semi-autonomous region with some 7.5 million inhabitants, who have their own language, parliament and flag. It is Spain’s wealthiest region.

Independence is a highly divisive issue, with a poll in July showing backing for secession in the region at its lowest level in two years, with 48.3% of people against and 44% in favor.

Pro-independence leaders staged an illegal referendum in 2017 and then declared they were breaking away from Spain. The Spanish government immediately seized control of the Catalan administration and the ringleaders were put on trial.

The Supreme Court found nine politicians and activists guilty of sedition on Monday and sentenced them to up to 13 years in jail, sparking increasingly violent demonstrations.

A spokeswoman for Barcelona town hall said 400 garbage containers were set ablaze on Wednesday, estimating that the city had suffered damage totaling more than 1 million euros ($1.1 million) in two days of unrest. Residents condemned the rioting.

“This doesn’t represent the majority of Catalans, whichever side they are on, be they pro-constitution or pro-independence,” said Joan, a 50-year-old small-business owner.

Caterina, a local architect said: “I feel really angry and really disappointed. I think this was really gratuitous.”

Both declined to give their family names.

Acting Interior Minister Fernando Grande-Marlaska said on Thursday that the government would dispatch more police to the flashpoint zones to help maintain order.

“We’re going to provide the personnel resources to guarantee public safety in Catalonia and to guarantee that police who are already on the frontline can rest,” he told Telecinco TV, without giving further details of the planned deployment.

Catalan nationalists began protest marches across the region on Wednesday and have said they will converge on Barcelona on Friday to coincide with the general strike.

In his address to parliament, Torra trod a careful line, acknowledging that he can only move if other parties backed his calls for a renewed secessionist drive.

“Parties and groups have to meet to trace the route towards an independent republic … During the course of this legislature, I will defend the right for self-determination to be exercised once more,” he said.

Torra’s party, Junts per Catalunya (United for Catalonia), rules the region with its ally, the separatist Esquerra Republicana de Catalunya (ERC). Together with a smaller far-left separatist party CUP, they have a small majority in the regional parliament.

But the ERC appeared lukewarm about Torra’s proposal.

“This is not the moment to lay down dates … but rather to achieve consensus,” said Esquerra spokesperson Sergi Sebria.

The Catalan question has dominated domestic politics in recent years and was instrumental in triggering parliamentary elections in April.

The Socialists have called a fresh national election next month, but a poll released on Thursday suggested parliament would remain split, with neither the left or right set to secure a majority.

Larry Kudlow accuses Fed board staff of being 'deep state'

Thu Oct 17 , 2019
National Economic Council Director Larry Kudlow says it’s not China that is causing a manufacturing export slowdown, it’s Europe. Larry Kudlow, the chief economic adviser to President Trump, accused staff members of the Federal Reserve‘s Board of being part of the “deep state.” Continue Reading Below “I don’t want to get […] 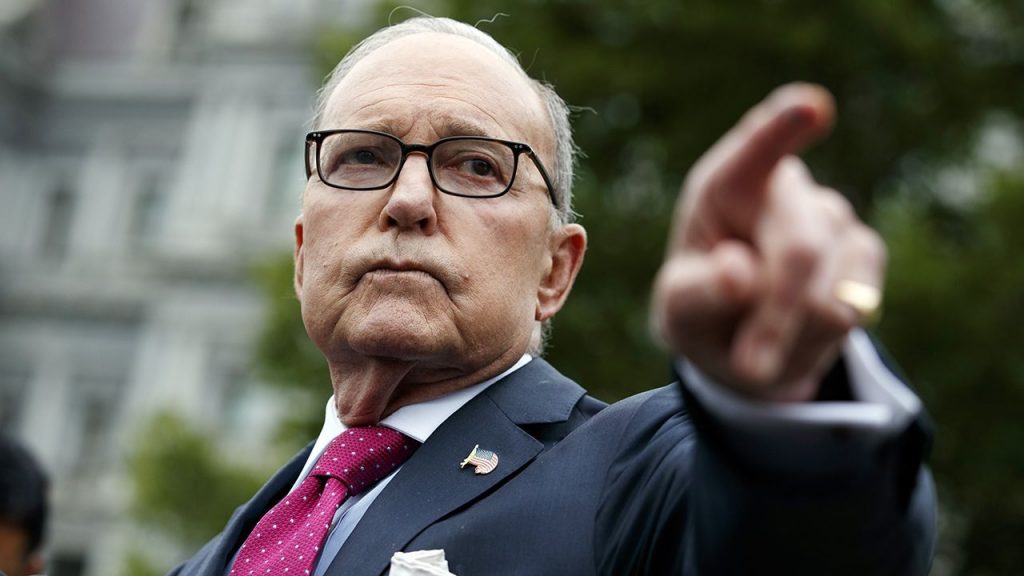