PARIS/FRANKFURT/BEIJING (Reuters) – Carrefour, Europe largest retailer, is exploring the sale of a minority stake in its loss-making business in China and has started sounding out potential buyers, people familiar with the matter said.

Carrefour’s China business is valued at around $1 billion and the retailer is working with BNP Paribas on the deal, the sources said.

They also said the French company is waiting to see the outcome of an auction for German retail group Metro’s China operations to assess the level of interest.

A Carrefour spokeswoman said on Friday: “There is nothing particularly new to say about the matter”, when asked about China.

Last week, a Carrefour spokeswoman had said a sale of the business in China was not on the agenda, in answer to market rumors that had sent the shares higher.

Carrefour, which has been in China since 1995, has spent years trying to fix a business where 2018 sales fell 5.9% on like-for-like basis to 4.1 billion euros ($4.58 billion), amid fierce competition from local players and a buoyant online market.

In January 2018, Carrefour announced a partnership with Tencent, which led to the opening of a high-tech store in Shanghai.

Carrefour also said at the time that Tencent and Yonghui, a retailer specialized in fresh food and small formats, could take a stake Carrefour China.

This investment has yet to be finalised.

The Tencent partnership was the latest step in Carrefour’s attempts to stem a decline in sales in China where its main focus is large hypermarkets.

Carrefour has been expanding into e-commerce and convenience stores in China and has modernized its hypermarket ranges with more fresh products and opened logistics centers to cut costs.

Recently Carrefour reallocated space in its Chinese hypermarkets through a partnership with Chinese electronics retailer Gome for 11 shop-in-shops.

Carrefour’s rivals in China have also faced problems with their businesses there.

In 2013, Britain’s Tesco gave up on going it alone in China, folding its business there into a state run company as a minority partner.

In 2016, Wal-Mart sold its Chinese online grocery store in return for a stake in JD.com, China’s No. 2 e-commerce firm.

Fri May 17 , 2019
A Deliveroo scooter driver takes a break between deliveries in London, Britain June 8, 2018. REUTERS/Simon Dawson May 17, 2019 By Kate Holton LONDON (Reuters) – Amazon has taken a stake in British online food delivery company Deliveroo, leading a $575 million fundraising to pit itself against Uber Eats in […] 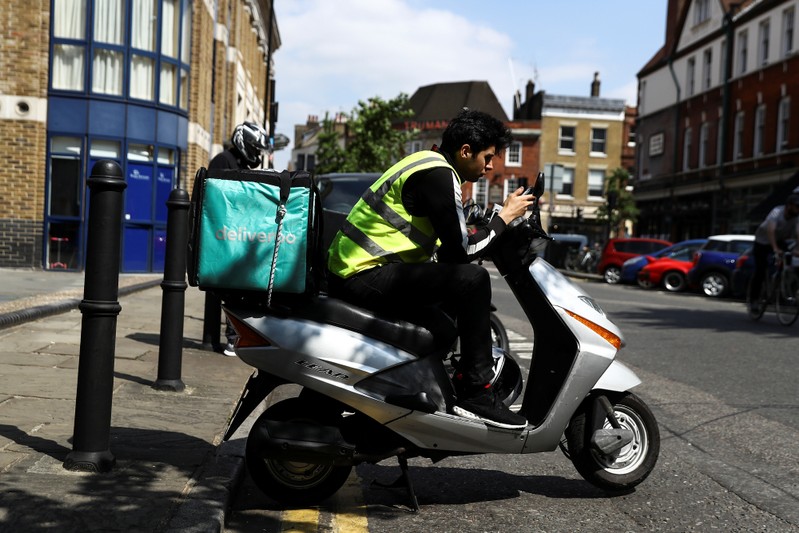