A firefighter rubs his head while watching the LNU Lightning Complex fires spread through the Berryessa Estates neighborhood of unincorporated Napa County, Calif., on Friday, Aug. 21, 2020.

Some of California’s largest wildfires in state history are growing larger and more destructive, with no end in sight as emergency response efforts are stretched thin and tens of thousands of people are forced to evacuate their homes.

Another blaze, called the CZU Lightning Fire in Santa Cruz and San Mateo counties, has forced evacuations of more than 64,000 people.

The fire near Vacaville, known as the Hennessey Fire, part of the LNU Lightning Complex, has burned down houses and killed a Pacific Gas & Electric worker who was helping the response to the blazes.

The fires have been the worst in the northern and central regions of California and are expected to expand this with weekend due to high heat and winds that will exacerbate the spread of flames.

The state’s fire season is getting longer and more destructive every year. Human-caused climate change is driving more frequent and severe heat waves and larger wildfires across the Western U.S.

“The hots are getting hotter, the drys are getting drier,” Gov. Gavin Newsom recently said in a video addressing the Democratic National Convention.

“Climate change is real. If you are in denial about climate change, come to California,” Newsom said.

A stifling heat wave and intense thunder storms caused more than 20,000 lightning strikes in the state and sparking a good portion of the fires and fire complexes.

The blazes are releasing a tremendous amount of smoke and pollution into the area while the state grapples with the ongoing coronavirus pandemic.

The heat wave has driven temperatures throughout the week above 100 degrees Fahrenheit and has prompted rolling blackouts as the demand for electricity and air conditioning is high.

Firefighters make a stand in the backyard of a home in front of the advancing CZU August Lightning Complex Fire Friday, Aug. 21, 2020, in Boulder Creek, Calif. (AP Photo/Marcio Jose Sanchez)

The smoke from the fires has created a dangerous health situation, especially for those vulnerable to developing respiratory infections, as lower air quality can weaken the immune system.

Studies show coronavirus patients in areas with high levels of air pollution are more likely to die from Covid-19.

The governor, stretched thin on emergency response crews to battle the fires, has called on the California National Guard, deployed almost 12,000 firefighters statewide and requested help from many states.

Emergency response preparation for California’s fire season was already stalled in April when the pandemic infected firefighters and raised fears of virus outbreaks at firefighter base camps.

The coronavirus threatens infections at evacuation shelters and crowded base camps where firefighters live after working long hours fighting the blazes.

Daily coronavirus cases in the U.S. fall below 50,000 for seven straight days after summer surge

Sat Aug 22 , 2020
Shannon Axelsson takes a break from sitting on the beach to be tested for the coronavirus disease (COVID-19) in Revere, Massachusetts, August 11, 2020. Brian Snyder | Reuters New coronavirus cases in the U.S. grew by nearly 48,700 on Friday, marking seven consecutive days the daily count fell below 50,000 […] 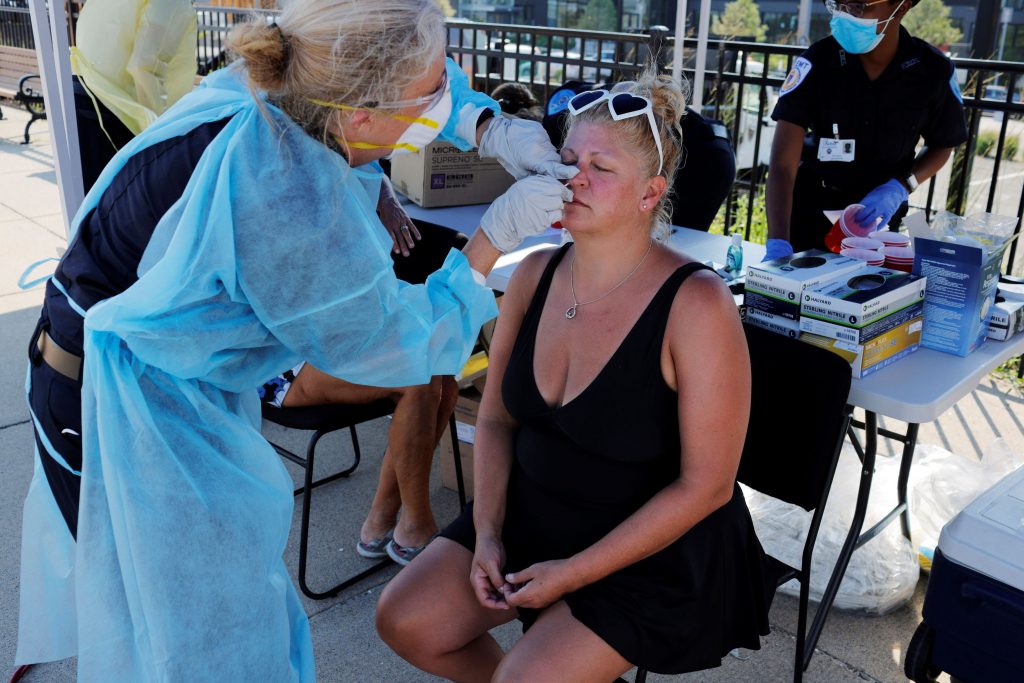