He was asked during an interview with CNN about the millions of Americans who celebrate the approaching holiday and the possibility that there could be a supply shortage for various goods and presents.

“I think there have always been two kinds of Christmas shoppers,” he said. “There’s the ones who have all their list completed by Halloween, and then there’s people like me who show up at the mall on Christmas Eve…if you’re in that latter bucket, obviously there’s going to be more challenges.” His attempt at levity was seized by the Republican National Committee that posted the video on Twitter, saying the former Indiana mayor was made a joke “about how difficult it will be for families to get Christmas presents this year.”

“Between mandates and crumbling supply chains, the Biden admin actually seems determined to cancel Christmas,” Ronna McDaniel, the head of the RNC tweeted.

The Transportation Department did not immediately respond to an after-hours email from Fox News.

President Joe Biden announced a deal on Wednesday to expand operations at the Port of Los Angeles as prices keep climbing and container ships wait to dock in a traffic jam threatening the U.S. economy and holiday shopping.

COSTCO, OTHER RETAILERS IMPACTED BY FEWER CHRISTMAS TREES THIS YEAR BECAUSE OF DROUGHT, SUPPLY CHAIN SHORTAGE

Prices are jumping in large part because container ships are stranded at ports and because unloaded goods are waiting for trucks, leading to mass shortages and delays that have caused a longer than expected bout of inflation.

The rising costs are eating into worker pay, creating a drag on growth and driving Republican criticism of Biden just as his multitrillion-dollar tax, economic, climate and infrastructure agenda is going through the crucible of congressional negotiations.

“The White House is saying that that’s you’re probably not going to be able to get everything you want for Christmas,” he said. “Well, I mean, who’s going to save Christmas for Americans? Pete Buttigieg? I mean, please. Pete Buttigieg couldn’t organize a one-car funeral. He’s not going to organize our nation’s ports and railroads and highways and airports.”

The Associated Press contributed to this report

Thu Oct 14 , 2021
For the first time, Boston voters will be deciding between two women for their next mayor, and both women took to the stage Wednesday night for the first one-on-one debate of the election.  Both mayoral candidates, Annissa Essaibi George and Michelle Wu, the top two vote-getters in the September preliminary […] 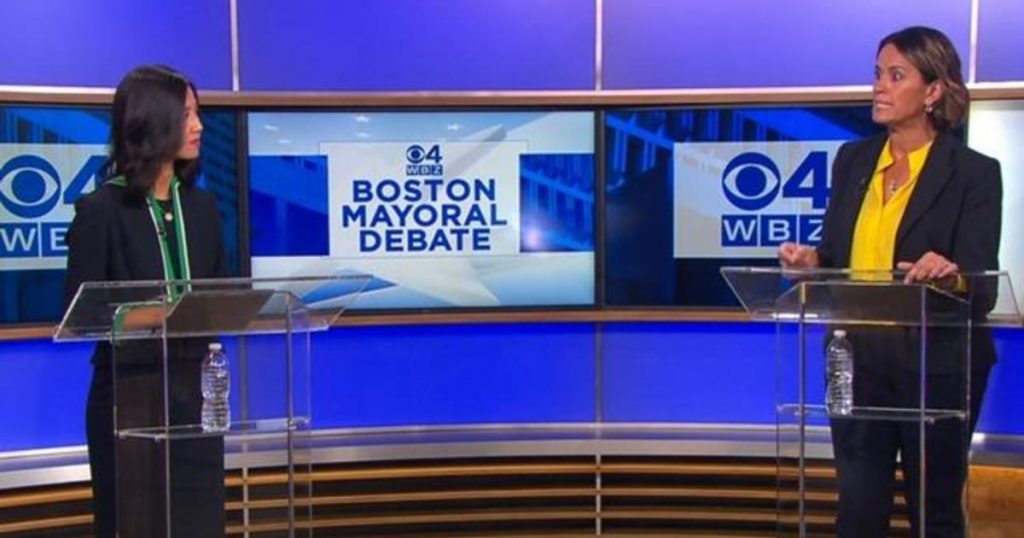