A lot of tech CEOs have voiced their outrage at the death of George Floyd, proclaiming in tweets that #BlackLivesMatter.

Charley Moore is different — he can actually relate.

Moore, the CEO of Rocket Lawyer, said he was racially profiled just last fall, while driving in Vermont with his son, who’s in college about an hour south of Burlington. Moore said he filmed the incident on his phone from the moment the officer pulled them over, despite the fact that they weren’t speeding or breaking any clear law.

“When he saw I was recording, he said, ‘What do you do for a living?'” said Moore, whose company provides online legal services for individuals and small to medium-sized businesses. “I told him I’m an attorney and everything changed. He became Mr. Vermont nice, literally speaking to the camera.”

“It’s happened to me my whole life,” said Moore, who has three sons and lives in San Francisco. “It’s been going on for 400 years, just not videoed.”

There are only four black CEOs among Fortune 500 companies, and none of them are in technology. Numerous tech leaders have said in recent days that they’re listening, and that discrimination won’t be tolerated, with some donating money to organizations working to end racial inequality and hold law enforcement accountable.

Still, the tech industry, where African-Americans are dramatically under-represented, has a way of appearing tone-deaf and out of touch.

A day after Facebook CEO Mark Zuckerberg announced $10 million in donations to “groups working on social justice,” he held a call with civil rights groups and told them that his website wouldn’t be taking down incendiary posts from President Donald Trump. Leaders of the organizations said in a statement after the Monday night call that they “are disappointed and stunned by Mark’s incomprehensible explanations.”

The makeup of his company opens him up to greater criticism — only 3.1% of senior leadership at Facebook is black, according to Facebook’s latest diversity report.

“Five million or $10 million is interesting, but give me three VPs,” said Ralph Clark, CEO of ShotSpotter in Newark, California, south of Oakland.

Clark, one of the country’s few black tech CEOs, splits his time between Seattle and Oakland. Like Moore, whom he calls a good friend, Clark views the killing of an unarmed black man by a policeman in Minneapolis through a personal lens.

He recalls the time in the 1980s when he was working as a marketing executive for IBM amd police officers in Los Angeles held him up for a crime he didn’t commit. And the time he had to tell his then-10-year-old son not to play the prank of toilet papering someone’s house with a group of friends because the joke isn’t funny when a black kid gets caught.

During ShotSpotter’s IPO roadshow in 2017, Clark says he noticed times when investors in the room immediately directed their eyes to the company’s chief financial officer, a white man who was a classmate of Clark’s at Harvard Business School.

“There are biases out there and you have to navigate them,” said Clark, who has four kids between the ages of 16 and 25. “We’re taught that you’ve got to be better. You’ve got to work twice as hard and be twice as good to get half as far.”

What happens to the other three officers?

Clark also understands the issues surrounding guns and police better than most CEOs.

ShotSpotter’s technology helps law enforcement detect and locate gunfire through sensors and algorithms, and the company sells it to more than 100 departments around the country — including Minneapolis. The quest is to accurately identify shooters and ultimately reduce gun violence.

Many of the company’s employees are ex-law enforcement officers and its board includes Bill Bratton, who was previously chief of the Los Angeles Police Department and police commissioner of New York City.

Clark described an all-hands Zoom meeting the company held on Friday, where the Floyd incident was a major topic of discussion.

Clark said everyone was horrified at the behavior of the police officer who held his knee on Floyd’s neck for nearly nine minutes while the victim cried out for help. The assailant, Derek Chauvin, was charged with murder and manslaughter on Friday.

But there’s some debate internally around what should happen to the three officers who stood idly by while Floyd died. They were fired from the department but have not been charged.

Clark thinks they should be prosecuted.

“I think it’s really, really important that those other officers are charged as accessories,” he said. “That’s the thing that’s going to change the behavior going forward.”

At Rocket Lawyer’s executive meeting on Monday, the conversation also centered around Floyd’s death and what could come of the tragedy. Moore said he’s put a lot of thought into the power of video and the ability for people to use it to help defend themselves. He said the company is working on an update to its mobile apps to let users capture and share video with attorneys as a method of deterrence and to help ensure accountability.

“Our mission is to make the tools of justice affordable enough for everybody,” said Moore. “This video, the ability to capture evidence is a really powerful one.”

There have been numerous instances of police violence against black people captured on video in recent years. So why is this particular incident causing so much angst for tech execs?

Clark said the video, and its many different angles, presents the viewer with a picture of inhumanity that can’t be ignored and begs for a response. The length of it, combined with the noticeable gasps from the victim and his desperate calls to his mother, who died two years, ago shows “a whole new level of depravity,” Clark said.

Moore said outrage has been building up under the Trump administration and has finally boiled over. Now that we’re in the middle of a global pandemic, with the country more divided than ever, CEOs know that help isn’t coming from the federal government.

“There’s a vacuum of the sort of moral authority that government typically provides,” Moore said. “We don’t have the moral authority of Barack Obama or Abraham Lincoln or Franklin Roosevelt or Dwight Eisenhower right now. Leaders of companies, by necessity, are filling the vacuum.”

Tue Jun 2 , 2020
Recent college graduate Emily Knell was a weekend away from starting a new job helping struggling elementary students when the coronavirus pandemic put the next phase of her life on hold. “They cannot really give me any answers as to when I can expect to go back to work,” she […] 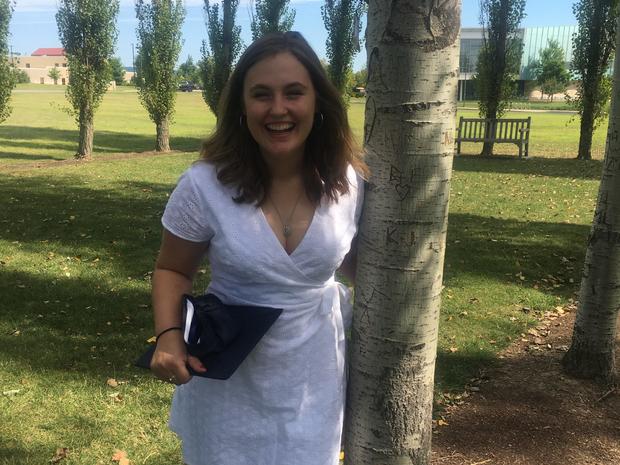