Bitcoin rose on Thursday as cryptocurrencies attempted a recovery from a major sell-off during the previous session, but the rebound was contained due to proposed regulatory crackdown efforts.

The world’s largest digital currency bounced back 9% above $42,000 Thursday morning, but cut gains to just 1% and last traded below $40,000 amid heightened regulatory concerns, according to Coin Metrics.

Bitcoin traded off its highs for the day after the Treasury Department said it is taking steps to crack down on cryptocurrency markets and transactions, and said it will require any transfer worth $10,000 or more to be reported to the Internal Revenue Service.

Some of bitcoin’s newer alternatives also attempted a comeback Thursday, with ether up 13% at $2,946, XRP climbing 7% to $1.25, and litecoin rising 10% to $223. Dogecoin, a meme-inspired crypto that has been talked up by Elon Musk, surged 17% to 42 cents following a tweet from the Tesla CEO.

On Wednesday, bitcoin dived 30% to nearly $30,000 at one point, before paring some of those losses. The entire crypto market lost hundreds of billions of dollars of value in a single day.

The move lower was driven by mixed signals from Musk — who came out as a believer in bitcoin earlier this year — and a regulatory clampdown on the market in China.

Last week, Musk said his electric car company had suspended vehicle purchases with bitcoin due to environmental concerns. Mining the cryptocurrency uses more energy than entire countries like Argentina and Ukraine, according to Cambridge University researchers.

Earlier this week, Musk suggested Tesla may have sold its bitcoin holdings, only to later clarify that it had “not sold any bitcoin.” On Wednesday, he tweeted the “diamond hands” emoji, implying that the electric vehicle maker would not shed any of its bitcoin.

Also weighing on bitcoin’s price Wednesday was the news that China had banned financial institutions and payment firms from providing cryptocurrency-related services, reiterating its tough stance on digital currencies.

“If you look at the history of bull markets, a correction of this size, between 30-40% of bitcoin price, tends to be part of the bull market,” Alyse Killeen, founder and managing partner of bitcoin-focused venture capital firm Stillmark Capital, told CNBC Wednesday.

Bitcoin investors say the cryptocurrency has become a kind of “digital gold,” providing protection from inflation as central banks around the world print money to soften the economic blow of the coronavirus crisis. They say this has led to increased buying from institutional and corporate investors.

However, in a note to clients this week, JPMorgan analysts said institutional investors were dumping bitcoin in favor of gold, reversing the trend that has played out over the last two quarters.

“I did talk to friends in the institutional bitcoin buy and custody space … and what I heard from them is that folks aren’t selling,” Killeen said.

“What you saw was newer buyers were exiting and long-term holders were accumulating or ‘hodling,‘ and that’s what we have historically seen at these more significant drawdowns in bull markets,” she added.

Hodling is a slang used by crypto investors, encouraging people to “hold on for dear life” in times of a market downturn rather than selling their assets.

In addition, signs of froth have appeared lately in the crypto market. Dogecoin, which is based on the “Doge” meme from 2013, saw a stunning rally earlier this year, propelled by supportive comments from Musk and other celebrities like Mark Cuban and Gene Simmons.

Crypto skeptics would argue that all digital assets are in a speculative bubble. In a closely watched fund manager survey, Bank of America found “long bitcoin” was the most crowded trade. According to the firm, 75% of fund managers said the cryptocurrency was in bubble territory.

Disclosure: Mark Cuban is a panelist on “Shark Tank.” CNBC owns the exclusive off-network cable rights to the show.

Thu May 20 , 2021
Treasury Secretary Janet Yellen speaks during the daily press briefing on May 7, 2021, in the Brady Briefing Room of the White House in Washington, DC. Saul Loeb | AFP | Getty Images The Treasury Department on Thursday announced that it is taking steps to crack down on cryptocurrency markets […] 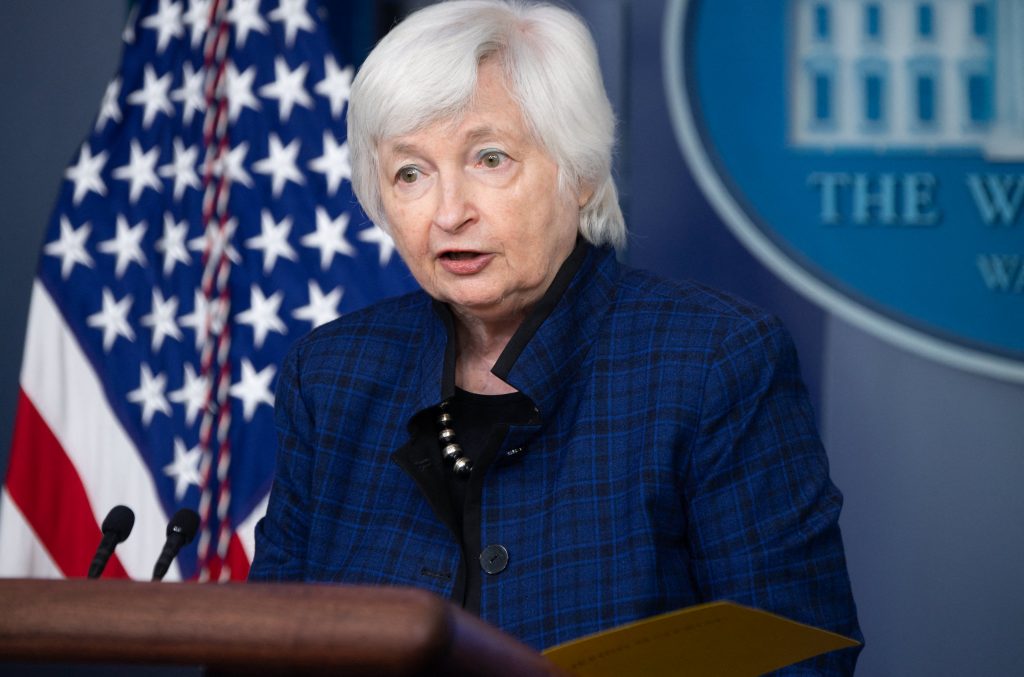