Do Elizabeth Warren, Bernie Sanders, Pete Buttigieg, Mike Bloomberg, and all the other Democrats running against Joe Biden really want to be president?

Because it sure doesn’t seem like they want the job.

The question is on behalf of the millions of Americans who are either working for, donating to, or simply rooting for any of the other 12 candidates still officially in the race. Put them together, and those 12 other candidates have the support of more than 70% of Democratic Party primary voters and a lot more donated money than Biden on his own. So it would be a good idea for those candidates to answer the question.

If they answer truthfully, it sure seems like all of them would have to say they really don’t want to win. At least they don’t want it enough to use Biden’s most vulnerable weaknesses against him. And the voters can’t be blamed if they extrapolate that any candidate not willing to show a killer instinct against Biden isn’t likely to have enough of what it takes to win an election against President Trump.

Biden’s biggest weakness is the still-unraveling series of facts about the extent of his son Hunter Biden’s sweetheart jobs and deals while the elder Biden was a senator and then vice president. Just one of them is getting the most attention now, and that is the highly paid board member position Hunter Biden got at the Ukrainian natural gas company Burisma in 2014. The widely reported figure is that Hunter Biden was paid $50,000 per month for that “job” despite not having any experience in the energy industry. Some reports have his salary as being as high as $83,000 per month.

But for some strange reason, his fellow Democrats vying for the nomination are incredibly mum about this story. They’re also not making a peep about Hunter Biden’s long history of other questionable deals and jobs that may not be illegal, but only a total naif wouldn’t surmise they were attempts to curry favor with his powerful father. By the way, the fact that it’s legal to give out jobs like that to the family members of politicians is precisely the kind of problem an enterprising presidential candidate would be promising to solve. Mysteriously, no Democrat seems to be pouncing on the opportunity.

Okay, it’s not a mystery why the Democrats who supposedly want to defeat Joe Biden for the nomination are so quiet about all this. They clearly don’t want to be seen as advancing President Trump’s efforts to get Ukraine to investigate the Hunter Biden deal. After all, the supposed outrage over the president’s work to embarrass Joe Biden by encouraging a Ukrainian probe is what the current impeachment process against President Trump is all about. Perhaps there is some kind of polite agreement among the Democratic candidates to lay off of Biden in order to help the impeachment process and not to advance the Trump campaign’s talking points.

How well do we think that’s going to work out?

We don’t have to make a wild guess, because this kind of thing has happened before. Bernie Sanders’ serious chances to become president instantly ended the moment he made his famous, “the American people are sick and tired of hearing about (Hillary Clinton’s) emails” comment in an October 2015 debate against Secretary Clinton. In fact, the public was still interested enough in the issue and it remains a key talking point for Clinton’s detractors even today. Whether there was some kind of agreement between the Sanders and Clinton campaigns to stay off that issue is probably something we’ll never know. But the decision by Sanders to back off the question stood out just as Trump was mercilessly and successfully going after each of his Republican opponents with all kinds of personal attacks.

Now, there are probably a lot of Democrats who are promoting the idea that they don’t want to see their candidates “stoop to Trump’s tactics.” But that may not cut it in a Democratic race where we’ve already seen Kamala Harris bash Biden on his four decade-old position on busing, Julian Castro seemingly attack Biden over his age, and Buttigieg accuse all Trump supporters of at least “looking the other way” on racism.

In other words, it’s already pretty nasty out there and no one is really above the fray. Besides, compared to Trump’s 2016 attacks on everything from his GOP opponents’ appearance to their speaking style, who is really going to honestly say any Democrat asking about Hunter Biden’s questionable income has gone too far?

One candidate who had the best chance to take advantage of this was Sen. Warren, who was asked point blank about the Hunter Biden issue at the very time she was unveiling her anti-corruption policy statement. But instead of making an issue about it, the usually assertive Warren meekly answered that she’d have to check her plan when she was asked whether the sweetheart deals the younger Biden got would be allowed in her administration.

Besides, there are many ways for Democratic candidates to pound Biden on this issue and still plausibly deny they’re somehow joining a narrative started by the Trump White House. For one thing, this issue was in question well before Mr. Trump even ran for office. In May 2014, ABC’s Jonathan Karl asked then-White House Press Secretary Josh Earnest a direct question about the apparent conflict of interest created by Hunter Biden’s position at Burisma. Earnest didn’t give much of a real answer.

But so far, no Democrat is taking this opportunity to prove they consider stamping out nepotism and other forms of political corruption more important than circling the wagons for the party and Biden. With President Trump sure to hit Biden hard for this issue if he does win the Democratic nomination, all this reticence will do is delay the inevitable.

Joe Biden is a career politician. Hunter Biden is a 49-year-old man. Declaring them both essentially off-limits for serious attack is basically a primary election death sentence for every Democrat running against Biden. I suspect all those other candidates probably know that, which means everyone supporting them is really wasting their time.

Jake Novak is a political and economic analyst at Jake Novak News and former CNBC TV producer. You can follow him on Twitter @jakejakeny.

The boom in airplane orders is over for Boeing and Airbus

Sun Dec 15 , 2019
Grounded Boeing 737 MAX aircraft are seen parked in an aerial photo at Boeing Field in Seattle, Washington, July 1, 2019. Lindsey Wasson | Reuters Boeing and Airbus have reveled in a decade of airplane sales that outshined any other in history—but the period is ending on a sour note. […] 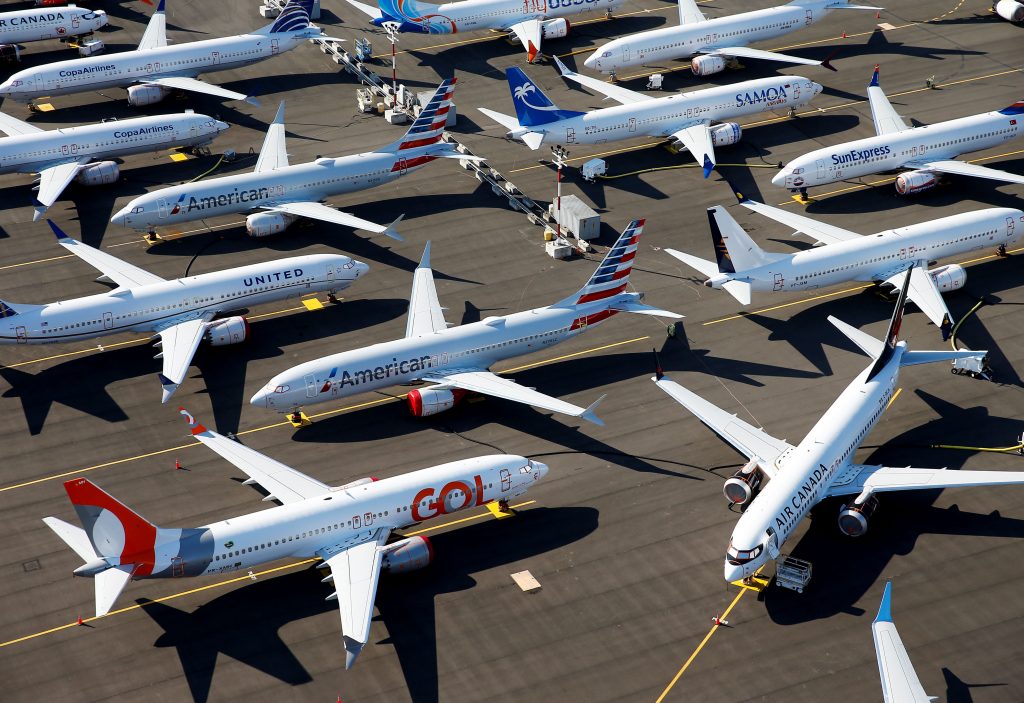