The plan, which Biden is expected to discuss in detail Thursday night from his transition headquarters in Wilmington, Delaware, would invest $20 billion in a national vaccination program in partnership with states, localities, tribes and territories. The pace of vaccinations is going much slower than U.S. officials had hoped, and states are blaming a lack of funding and inconsistent communication from the federal government for the slow rollout.

“Current vaccination efforts are not sufficient to quickly and equitably vaccinate the vast majority of the U.S. population,” Biden’s administration wrote in a 19-page document explaining the plan. “We must ensure that those on the ground have what they need to get vaccinations into people’s arms.”

Here’s a quick look at what Biden’s proposal would also do:

Biden would also scale up testing to support safely reopening schools and protect at-risk populations, like the elderly and people with preexisting conditions. His administration said testing is a “critical” strategy for controlling the spread of the virus, but added tests are still not widely available, and the U.S. is still not using the ones it has effectively.

Notably, the plan includes investing in new treatments for Covid-19. Earlier in the day, a member of Biden’s Covid-19 advisory board, Dr. Celine Gounder, said public health officials have been focusing too much on treatments such as monoclonal antibodies and Gilead Sciences‘ antiviral drug remdesivir. Monoclonal antibodies, in particular, have had a lukewarm response from health-care providers, often sitting unused, according to U.S. officials.

“We need to think about other” therapies, Gounder told the Johns Hopkins Bloomberg School of Public Health during a webcast, adding “monoclonal antibodies may not be the solution here.”

The plan also calls for creating a fund to support 100,000 new health-care jobs as well as using the National Guard to boost the nation’s supply of vials as well as gloves and masks for health workers already on the frontlines.

Biden’s administration plans to invest $30 billion in the Disaster Relief Fund to ensure sufficient supplies of protective gear. It will also provide 100% federal reimbursement for critical emergency supplies to states, local governments and tribes, including deployment of the National Guard, according to an outline of the plan. Biden plans to request an additional $10 billion to manufacture pandemic supplies.

Biden would “restore U.S. leadership globally” and provide support to the international health and humanitarian response efforts. It’s unclear if that means the U.S. will rejoin the World Health Organization after President Donald Trump withdrew the nation from the international agency last year. However, Biden has said in the past that he intends on returning the U.S. to the WHO.

The new plan from the president-elect comes as the coronavirus continues to rapidly spread across the U.S. and deaths sharply rise. The nation is now recording at least 245,300 new Covid-19 cases and at least 3,360 virus-related deaths each day, based on a seven-day average calculated by CNBC using Johns Hopkins University data. The U.S. reported a record 4,327 coronavirus fatalities on Tuesday, the second time in just a week the nation’s daily death toll has surpassed 4,000.

Trump’s response to the pandemic has been criticized, including his handling of distributing Pfizers’ and Moderna’s Covid-19 vaccines.

As of Thursday at 9 a.m. ET, more than 30.6 million doses of vaccine had been distributed across the U.S., but just over 11.1 million shots have been administered, according to data compiled by the Centers for Disease Control and Prevention. The number is a far cry from the federal government’s goal of inoculating 20 million Americans by the end of 2020 and 50 million Americans by the end of this month.

The Trump administration on Tuesday adopted Biden’s plan to release most of the doses it had held back for the second round of shots of Pfizer’s and Moderna’s two-dose vaccines.

In an attempt to speed up the pace of vaccinations, the Trump administration also changed the way it allocates vaccine doses to states and the CDC expanded the vaccine eligibility to everyone 65 and older as well as to those with comorbid conditions, such as diabetes and heart disease.

‘DC Draino’ Explains Why Trump Should Be Proud of His Impeachments 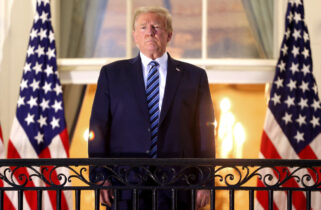