WASHINGTON (Reuters) -U.S. President Joe Biden will host a meeting with German Chancellor Angela Merkel next Thursday to affirm “deep and enduring” ties between the NATO allies while also tackling some areas of disagreement, the White House said on Friday.

White House spokeswoman Jen Psaki said the two leaders would discuss ransomware attacks that have hit companies in the United States and around the world, as well as the Nord Stream 2 gas pipeline from Russia to Germany, which Washington opposes.

Psaki said it would be an “official working visit” aimed at shoring up the partnership between the two countries and identifying ways to further strengthen cooperation.

It will be Merkel’s first visit to Washington since Biden took office in January. Merkel, now in her fourth term, has said she will step down after German national elections in September.

Psaki said Biden continued to view the $11 billion Nord Stream 2 pipeline as a “bad deal,” but declined to say if an agreement could be reached to stave off resumption of temporarily suspended U.S. tariffs on Nord Stream 2 AG, the Germany company behind the pipeline, and its chief executive.

The U.S. State Department in May concluded that the company and CEO Matthias Warnig, an ally of Russian President Vladimir Putin, engaged in sanctionable activity. But Secretary of State Antony Blinken immediately waived those sanctions, saying it was in the U.S. national interest.

Biden has said he wants to improve ties with Germany, an ally he needs to help deal with broader issues including climate change, the economic recovery and relations with Iran and China.

German officials say they hope to resolve the issue by August and the Biden-Merkel meeting could provide important momentum for getting to a deal.

Berlin and Washington also remain at odds over a temporary waiver of intellectual property rights being considered by World Trade Organization members to help end the COVID-19 pandemic. Washington backs the waiver, but Germany is opposed.

Asked if Biden would seek to convince Merkel to support the patent waiver, Psaki said the president was a “strong proponent” of such action, but it was just one of several tools that could be used to boost COVID-19 vaccination rates around the world.

Amnesty International, Public Citizen, the Association of Flight Attendants-CWA and other groups urged Biden in a letter on Friday to pressure Merkel to support the waiver.

“The Merkel summit cannot be considered a success unless it includes an agreement for Germany to join your support for a waiver and to prioritize the fastest possible end of the pandemic,” they wrote in the letter, which was seen by Reuters.

Psaki said the two leaders will also discuss ransomware cyberattacks, after Biden pressured Putin to move against cybercriminals operating out of Russia.

Sat Jul 10 , 2021
Weaponry, mobile phones, passports and other items are being shown to the media along with suspects in the assassination of President Jovenel Moise, who was shot dead early Wednesday at his home, in Port-au-Prince, Haiti July 8, 2021. REUTERS/Estailove St-Val July 10, 2021 By Luis Jaime Acosta and Andre Paultre […] 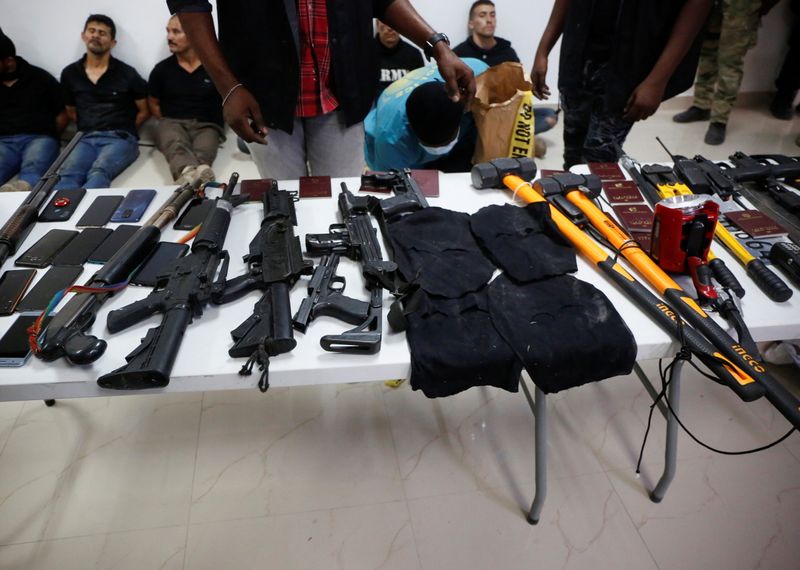