US President Joe Biden delivers remarks on the COVID-19 response and the vaccination in the East Room at the White House in Washington, DC on May 17, 2021.

WASHINGTON – President Joe Biden in a Wednesday morning call with Israeli Prime Minister Benjamin Netanyahu said he expected “a significant de-escalation today on the path to a ceasefire.”

During the call with Netanyahu on Wednesday, their fourth conversation since the violence erupted, Biden discussed the ongoing conflict in Gaza and Israel’s ambition to degrade Hamas.

“The President conveyed to the Prime Minister that he expected a significant de-escalation today on the path to a ceasefire,” according to a White House readout of the call.

Israeli Prime Minister Benjamin Netanyahu gestures as he speaks during a briefing to ambassadors to Israel at a military base in Tel Aviv, Israel May 19, 2021.

Violence between Israel and Hamas militants has escalated for more than a week. Israeli strikes in the Gaza Strip have led to at least 212 Palestinian deaths, according to authorities there. Meanwhile, Israel has said more than 3,400 rockets have bombarded its cities. At least 12 people have died in Israel.

The latest round of fighting has marked the biggest escalation in the conflict in years. On Tuesday the European Union became the latest to call for a cease-fire.

Smoke rises following an Israeli air strike on a building, amid a flare-up of Israeli-Palestinian fighting, in Gaza City May 18, 2021.

“We have had over 60 calls, from the president on down, with senior leaders in Israel, the Palestinian Authority and other leaders in the region,” White House principal deputy press secretary Karine Jean-Pierre told reporters aboard Air Force One.

“The president has done this for a long time, for decades, he believes this is the approach we need to be taking. He wants to make sure we end the violence and the suffering we have seen for the Palestinian and Israeli people,” Jean-Pierre added.

When pressed for more details of the call, Jean-Pierre said she would let the formal readout “speak for itself.”

Biden, who is slated to address the nation’s newest Coast Guard officers on Wednesday, told Netanayhu earlier in the week that the U.S. supported a cease-fire in Gaza.

“The President reiterated his firm support for Israel’s right to defend itself against indiscriminate rocket attacks. The President welcomed efforts to address intercommunal violence and to bring calm to Jerusalem,” according to a White House readout of that call.

People look at an unexploded missile thrown by Israel in al-Rimal neighborhood as Israeli warplanes continue to carry out airstrikes in Gaza City, Gaza on May 18, 2021.

Biden also called on Israel to ensure the protection of innocent civilians amid the conflict.

On Sunday, Israel conducted a strike that leveled several homes in the Gaza Strip. The strike, the deadliest yet in the ongoing conflict, killed at least 42 people. Meanwhile, more than 3,000 rockets bombarded Israeli cities.

Netanyahu defended a punishing airstrike Saturday that collapsed a 12-story building housing international media, citing intelligence that Hamas was using a portion of the building to plan terror attacks.

Wed May 19 , 2021
OAN NewsroomUPDATED 7:19 AM PT – Wednesday, May 19, 2021 Maricopa County officials held a hearing on the Arizona audit, but failed to invite the state Senate or address questions from voters. One America’s Christina Bobb has more from the White House. MORE NEWS: Texas Gov. Greg Abbott Halts Extra […] 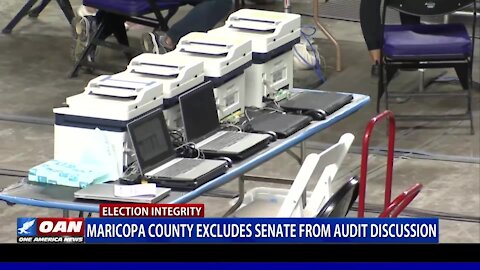