Democratic U.S. presidential nominee and former Vice President Joe Biden speaks at the Get Out The Vote event in Cleveland, Ohio, U.S., November 2, 2020.

American presidents have long wanted the U.S. to be self-sufficient when it comes to oil, and if former Vice President Joe Biden wins the presidency, he will likely have a similar agenda but with an added emphasis on clean energy.

During the President Donald Trump’s administration, the U.S. has become the world’s largest energy producer, surpassing both Russia and Saudi Arabia in oil production. It also became a net exporter of oil, when including refined products like diesel, jet fuel and gasoline.

“We finally became energy independent. Every president since Nixon — nine presidents — have been calling for energy independence, and we finally achieved it and now we’ll see what happens,” said Daniel Yergin, vice chairman of IHS Markit.

“It was the Obama administration that presided over the rapid expansion of U.S. oil and gas. They talked about it as independence and a freer hand in foreign policy,” said Helima Croft, head of global commodities strategy at RBC. She said the Trump administration, has taken the discussion further to the issue of U.S. dominance in oil, where it could be “weaponized” or used as a heavy handed policy lever.

“It’s a favored industry under [Trump]. He has championed the industry,” said Croft. When Obama won the White House in 2008, the U.S. was producing just 5 million barrels a day, and by 2015, production had climbed to 9.5 million barrels before falling off in 2016.

Biden has said he won’t end fracking, a U.S.-developed process oil and gas producers used to get at hard to reach oil. But Biden’s critics say he will side with the more progressive wing of his party, which would like to end fracking.

But while Biden’s’energy plan includes $2 trillion in clean energy initiatives, it does not extinguish oil and gas production. Analysts said he may increase regulation of the sector, by limiting methane emissions and and he said he will limit fracking on federal land.

“I think he will look at oil prices and oil diplomacy through the lens of the broader global economy, the U.S. economy and U.S. jobs,” said Croft. “I think he’ll look at it as an important economic input. Whereas, I think President Trump really thought of the industry as something of a strategic importance and it needed to be protected. I think for Biden, oil policy will remain important, but it will be part of a broader economic input.”

Biden will need a blue wave, where he has Democratic majorities in the House and Senate.

Croft said the market is focused on this aspect of the election, since if there is a blue wave, oil prices would be boosted by a bigger stimulus package next year, from Democrats versus Republicans.

The market is also watching the course of the pandemic. The oil price will be impacted if the U.S. joins Europe and reinstates some aspects of lockdowns. That could hurt U.S. gasoline demand, which would have an immediate negative impact on world oil prices. U.S. gasoline makes up about 10% of global oil demand typically.

“I think Biden is sort of trying to hug this midline within the Democratic party. He is trying to keep the Green New Deal base, as well as the voters he needs to win in Ohio and Pennsylvania,” said Croft. “After the [presidential] debate, his team was out there saying we’re talking about scaling back subsidies, not fracking.” As she explains, it is a delicate balancing act.

Yergin said Biden will not ban fracking, nor would he want to.

“He can’t ban fracking anyway. Oil production is regulated by states,” said Yergin. “In general, a Biden administration has made clear their propensity across the board would be toward more regulation, especially in the energy area. He recognized the energy position the U.S. now has is advantageous from a foreign policy point of view.”

Yergin said whether the U.S. remains the No. 1 producer is yet to be seen, regardless of who is president.

“It would depend on the price of oil irrespective of the two of them. That said, I think the U.S. will still be one of the Big Three oil producers. No. 1 is an open question,” he said.

Croft said the net impact of higher regulation could be higher production costs for U.S. producers.

The rise of the U.S. shale industry has changed the dynamics of global energy. During the Trump administration, the U.S. has become a big exporter of oil, following a reversal of a long running ban on exports during the final weeks of the Obama administration.

When the world became saturated with oil in 2016 and prices sagged, Saudi Arabia and OPEC, and Russia formed a new alliance, OPEC +. To tackle the impact of surging U.S. oil output, they combined to regulate oil production of OPEC and Russia, and other non-OPEC producers.

When oil demand cratered during the pandemic in early 2020, Russia and Saudi Arabia disagreed on a production goal. Trump personally jumped in to help forge a deal to stabilize crashing energy prices.

Wild card from a Biden victory

Ed Morse, head of global commodities at Citigroup, said a Biden victory could have an immediate impact on the outcome of the OPEC Plus meeting in December. “A Biden win would likely impact and solidify the relationship between Russia and Saudi Arabia,” Morse wrote.

A Biden win could likely change the relationship with both countries. Russia could be subject to more financial sanctions for a number of issues, including meddling in the U.S. election. Morse said for Saudi Arabia, U.S. support could cool and it could focus on the Saudi human rights record, including the disappearance of journalist Jamal Khashoggi.

“A Biden election could make it more likely that the larger members of OPEC + would take a more conservative approach and, depending on whether oil prices remains in the $30 range, could lead them to cut production further come January,” Morse wrote. He said they could postpone their 1.9 million barrel-a-day production increase scheduled for Jan. 1. Saudi Arabia and Russia may move closer, backing their bilateral agenda with new projects in energy but also possibly arms sales, Morse noted.

But Croft said she does not expect Saudi Arabia will move closer to Russia, and notes that U.S. weapons sales are also important in the region. “I honestly think the first move on the part of the Gulf states will be to try to ingratiate themselves with a Biden administration,” said Croft.

As for Iran, she expects it to be an early priority for Biden to try to re-enter the Joint Comprehensive Plan of Action, which Trump abandoned. The Obama era agreement allowed for the removal of sanctions on Iran in exchange for an end to its nuclear program, but Trump drew out the agreement calling it one-sided.

Croft said if Biden makes such a move, that will allow for the return of about 1 million barrels a day of Iranian crude by the end of 2021. “The chances of a new Iranian nuclear deal that leads to swift sanctions relief are higher under a Biden administration,” Croft noted.

On the other hand, if Trump wins the election, “the maximum pressure policy on Iran looks set to continue,” she said, “and the key question is whether Iran retains its policy of maximum resistance when faced with four more years of severe economic pain.”

As a Biden administration would push greener fuels, Morse expects one of its first actions would to be to rejoin the Paris Agreement and realign with China, at least on climate change policy. Trump pulled the U.S. from the accord.

“It is close to inconceivable to envisage a meaningful step toward a significant reduction in carbon and methane emissions without action by the two largest economies and two of the largest emitting countries in the world,” Morse notes. China has committed to becoming carbon neutral by 2060.

But he does not expect that to end tensions with China.

“The very fact that the EU, China and the U.S. under a Biden Presidency will all be seeking to promote new technologies to create new jobs through green policies sets them up to compete with one another on the very technology issues that lie at the heart of economic difficulties between China and other countries,” notes Morse. He added that includes cybersecurity issues and technology transfer issues that have been sources of tension between the U.S. and China and have manifested in trade disputes.

Biden would like the U.S. to use 100% clean energy and have zero emissions by 2050 through policies aimed at lower emissions from transportation and limiting methane from oil and gas. His $2 trillion plan would encourage investment in infrastructure, electric vehicles, renewable energy, efficient buildings and in agriculture and conservation.

Analysts said the plan would be paid for by rolling back recent corporate tax cuts and increasing private and state and local investments.

Biden also has a goal of making the U.S. a leader in electric car production. Yergin notes that GM has making a foray into electric vehicles, as is Ford.

“In a sense, it’s a form of energy industrial policy,” said Yergin. He said the effort will continue to bring the supply chain back to the U.S. Besides cars, “China does manufacture 70% of the world’s solar panels in China, and another 10% outside of China,” he said.

Mon Nov 2 , 2020
Stocks rose on Monday, the first trading day of the month, as markets recovered some of the sharp losses from last week and braced for the U.S. presidential election. The Dow Jones Industrial Average traded 445 points higher, or 1.7%. The S&P 500 gained 1.2%. The Nasdaq Composite lagged, rising […] 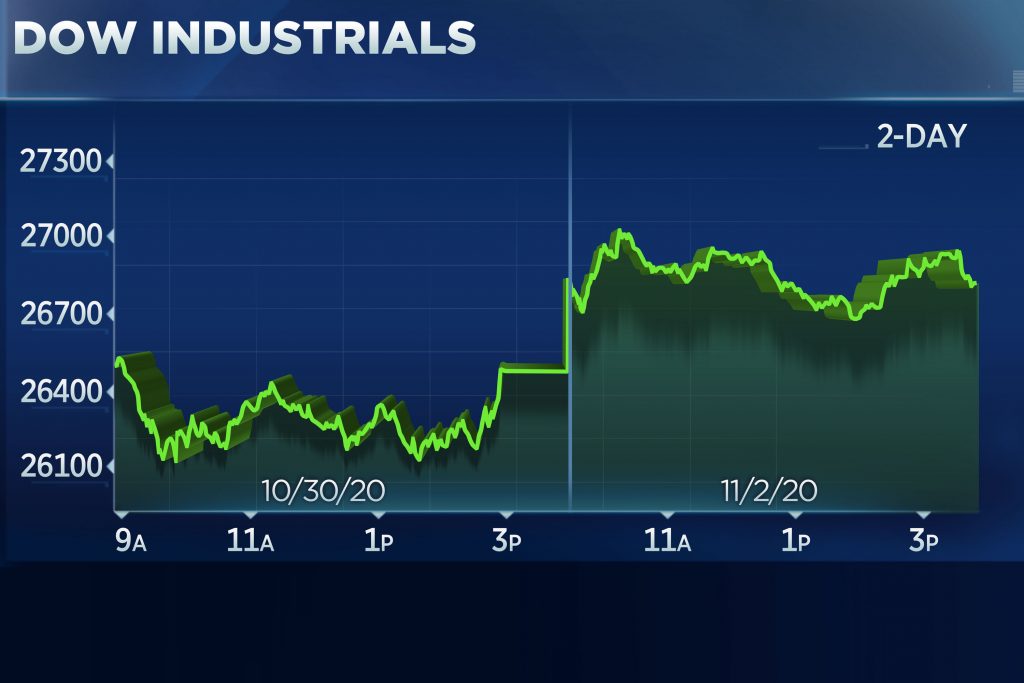