President-elect Joe Biden offered a scathing rebuke of the hundreds of pro-Trump rioters who continued to storm the U.S. Capitol Complex and disrupted the official declaration of the 2020 election results earlier on Wednesday.

Biden, who will become the U.S. president on Jan. 20, castigated the rioters and called upon law enforcement to quell violence in Washington.

“At this hour, our democracy is under unprecedented assault, unlike anything we’ve seen in modern times,” the president-elect said from Wilmington, Delaware. “Let me be very clear: The scenes of chaos at the Capitol do not reflect the true America, do not represent who we are.”

“I’m genuinely shocked and saddened that our nation, so long a beacon of hope and light for democracy, has come to such a dark moment,” he added. “America’s about honor, decency, respect, tolerance. That’s who we are. That’s who we’ve always been.”

The president-elect implored Trump to make a public and vocal announcement to demand the rioters leave the Capitol immediately.

“I call on President Trump to go on national television now, to fulfill his oath and defend the Constitution and demand an end to this siege,” Biden said.

But just minutes after the conclusion of Biden’s remarks, Trump posted a video to his Twitter account that falsely challenged the legitimacy of the 2020 election but nonetheless asked the pro-Trump mob to “go home.”

“I know your pain, I know you’re hurt. We had an election that was stolen from us, it was a landslide election and everyone knows it, especially the other side,” Trump said in the video. “But you have to go home now, we have to have peace.”

The comments from both Biden and Trump came as protestors freely roamed the Capitol complex, including the Senate chamber, while falsely claiming that the president had won the 2020 race.

Multiple law enforcement officials said at least one person in the Capitol building had been shot, and that at least one improvised explosive device had been found on the grounds.

Vice President Mike Pence, who had been presiding over the count of Electoral College votes, was ushered out of the Senate rioters supporting his boss breached the complex. Pence and Sen. Charles Grassley, the president pro-tempore, were taken to a secure location.

A spokesperson for House Speaker Nancy Pelosi said that the Democratic leader was “safe.”

U.S. President-elect Joe Biden address the protests taking place in and around the U.S. Capitol in Washington as the U.S. Congress held a joint session to certify the 2020 election results, at a news conference at his transition headquarters in Wilmington, Delaware, January 6, 2021.

Pa. Senate continues to fight for the state 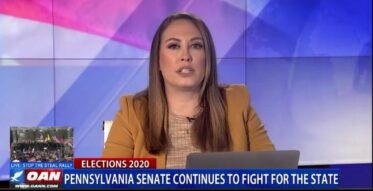