The beer that Baltimore Ravens cornerback Marcus Peters shotgunned after jumping into the stands to celebrate a victory over the Buffalo Bills last Sunday turned out to be an expensive beverage.

He has been fined $14,037 for unsportsmanlike conduct, the NFL Network reported Saturday.

Maybe it was worth it, since some friendly and loyal fans attending the game in Buffalo certainly enjoyed the moment after Peters broke up a pass on a fourth-down play to clinch a 24-17 victory over the Bills. The Ravens continued to roll on Thursday, crushing the visiting New York Jets 42-21 to improve to 12-2 and clinch the AFC North.

Peters seems to be enjoying his time with Baltimore after he was involved in a blockbuster trade that sent cornerback Jalen Ramsey to the Los Angeles Rams in October. Following word of Saturday’s fine, he was still celebrating on Twitter, posting a series of beer emojis.

Later Saturday, Bud Light responded to the news on Twitter, writing, “Drinking a celebratory beer isn’t a crime. We’ll match that tab with a donation to a charity on your behalf @marcuspeters. DM us.”

Peters, in his fifth NFL season, has five interceptions, 13 passes defensed and 49 tackles this season after splitting time with the Rams (six games) and Baltimore (eight games), and has another reason to relax anyway. The Ravens don’t play again until Dec. 22, when they go to Cleveland to face the 6-7 Browns.

Sun Dec 15 , 2019
President Trump traveled to Philadelphia on Saturday to attend the annual Army-Navy game, capping off what the president called a “wild week” that included developments in the impeachment inquiry and the president finalizing the first phase of a trade deal with China.  Mr. Trump walked onto the field around 3 p.m. […] 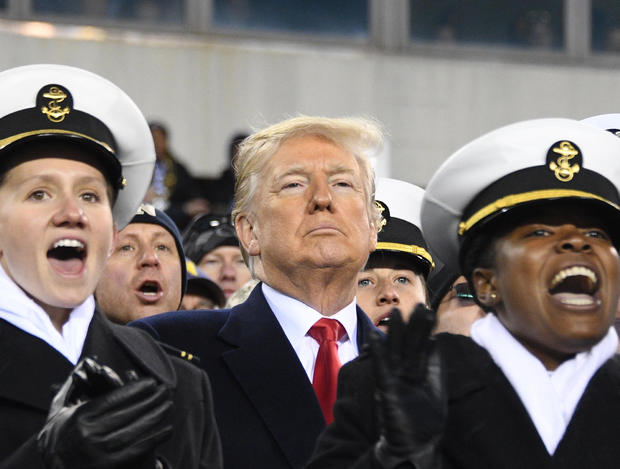