A supplied image shows University of Newcastle research academic, Professor Lyndall Ryan, sitting in front of a screen July 18, 2018, displaying a map detailing the number of Aboriginal and Torres Strait Islander massacres that occurred on Australia’s colonial frontier. University of Newcastle/Handout via REUTERS

SYDNEY (Reuters) – Thousands of aborigines are estimated to have been murdered in 500 massacres across Australia from European settlement in 1788 until the mid-20th century, researchers said on Friday, as the country continues to struggle with its bloody colonial past.

Historians from the University of Newcastle said they had drawn on settler diaries, contemporary newspaper reports, evidence from indigenous groups and state and federal archives to attempt to catalog the violence for the first time.

“To date we have identified about 250 massacre sites in colonial Australia and we estimate there will be about 500 when the project is finished,” lead researcher Lyndall Ryan told Reuters.

Ryan estimates the death toll from the 250 massacres already identified at about 6,200 people, including less than 100 Europeans. It defines a “massacre” as an incident in which at least six people were killed.

The research, which is expected to be completed in 2019, comes as Australia is wrestling with an emotional debate about how it honors the anniversary of the arrival of the first European settlers.

Each year Australians enjoy a national holiday on Jan. 26, marking the date the “First Fleet” sailed into Sydney Harbour in 1788 carrying mainly convicts and troops from Britain. Some indigenous people refer to Australia Day as “Invasion Day”.

More than half of all Australians support changing the date of the national holiday, a poll by the Australia Institute think-tank showed earlier this year.

The conservative government opposes a change, though indigenous campaigners say a change is essential for Australia to come to terms with its past.

The country’s 700,000 or so indigenous people track near the bottom of its 23 million citizens in almost every economic and social indicator.

Fri Jul 27 , 2018
FILE PHOTO: U.S. President Donald Trump and North Korea’s leader Kim Jong Un (L) arrive to sign a document to acknowledge the progress of the talks and pledge to keep momentum going, after their summit at the Capella Hotel on Sentosa island in Singapore, June 12, 2018. REUTERS/Jonathan Ernst/File Photo […] 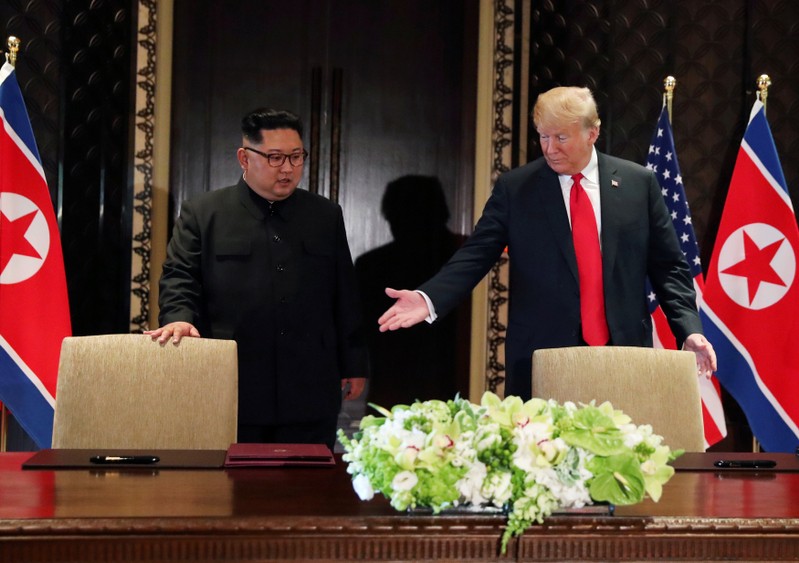