FILE PHOTO: A man is seen in front of an electronic board showing stock information on the first day of trading in the Year of the Pig, following the Chinese Lunar New Year holiday, at a brokerage house in Hangzhou, Zhejiang province, China February 11, 2019. REUTERS/Stringer

TOKYO (Reuters) – Asian stocks were subdued on Friday ahead of key Chinese data that could provide more clues on how heavily the U.S.-Sino trade war is weighing on the economy, while oil prices were supported by supply concerns after attacks on tankers in the Gulf of Oman.

China will release May industrial production along with retail sales and investment numbers at 0700 GMT.

Economists polled by Reuters expect industrial production in China to have risen 5.5% in May from 5.4% in April and believe retail sales increased 8.1% from 7.2% the previous month.

But even if the data is better than forecast, expectations of more stimulus in China are growing as the trade dispute threatens to escalate into a full-blown trade war that could push the global economy into recession.

MSCI’s broadest index of Asia-Pacific shares outside Japan edged down 0.2%.

For the week, it was headed for a gain of nearly 1%, as global stock markets were lifted by factors including expectations for Federal Reserve rate cuts and relief over a U.S.-Mexico tariff deal.

“Risk assets have been struggling for direction as competing themes battle to decide the tone of global risk sentiment,” wrote strategists at ANZ.

“On one hand, the prospect of Fed easing assuages some fear of a global slowdown, but on the other hand trade issues still

U.S. stocks rose on Thursday after two days of declines, with energy shares rebounding on the back of crude oil’s surge. [.N]

Wall Street shares have had a strong run in June on hopes the Federal Reserve will ease monetary policy soon to counter pressure on the U.S. economy from the escalating trade war. The S&P 500 index is up about 5% so far for the month.

The Fed’s June 18-19 meeting will give investors an opportunity to see if the Fed’s monetary policy stance is in sync with market expectations for a near-term rate cut.

A Reuters poll this week showed a growing number of economists expect a Fed rate cut this year but the majority still expect it to stay on hold.

“There is a large degree of uncertainty going into next week’s FOMC (Federal Reserve Open Committee) meeting as market reaction will differ significantly depending on whether the Fed hints toward easing policy,” said Shusuke Yamada, chief Japan FX and equity strategist at Bank Of America Merrill Lynch.

“A wait-and-see mood is likely to begin prevailing in the markets ahead of the FOMC.”

Brent surged on Thursday after two oil tankers were attacked in the Gulf of Oman, one Norwegian-owned and the other Japanese-owned.

The United States has blamed Iran for the assaults. But U.S. and European security officials as well as regional analysts left open the possibility that Iranian proxies, or someone else entirely, might have been responsible.

The dollar index against a basket of six major currencies was little changed at 97.023 after ending the previous day nearly flat, with caution ahead of the next week’s Fed meeting keeping the greenback in a tight range.

The Australian dollar extended overnight losses and fell to a three-week low of $0.6892.

The Aussie has lost 1.4% this week, during which soft domestic labor data added to expectations of a rate cut by the Reserve Bank of Australia.

(Corrects day in the first paragraph)

Dollar subdued, on course for weekly gain before Fed meeting 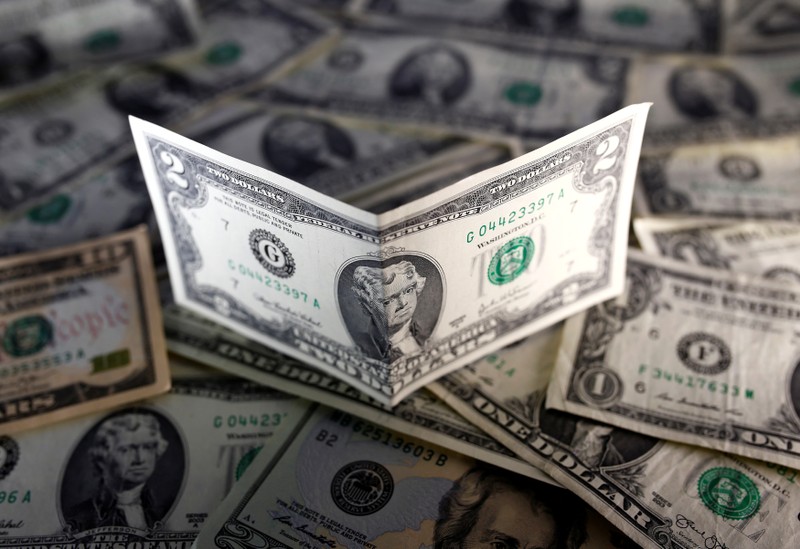