Taiwan’s President Tsai Ing-Wen waves to assembled guests from the deck of the ‘Ming Chuan’ frigate during a ceremony to commission two Perry-class guided missile frigates from the U.S. into the Taiwan Navy, in the southern port of Kaohsiung on November 8, 2018.

As the United States and China remain deadlocked in a deepening dispute over trade and technology, some experts say Taiwan’s value as a bargaining chip has increased.

The self-governed island — which Beijing deems to be a renegade Chinese province — is one of many flashpoints in the rivalry between the world’s two superpowers.

Taiwan has always been a “chess piece” that Washington can play with in U.S.-China relations, said Zhiqun Zhu, a professor of political science and international relations at Bucknell University.

“Taiwan’s value to the U.S. will only increase as tensions between the U.S. and China escalate,” Zhu told CNBC.

Under the Chinese Communist Party’s “One China” policy, the self-ruled island is part of mainland China. Chinese President Xi Jinping has said before that China “must be and will be” reunified with Taiwan — by force if necessary.

However, recent military and diplomatic actions from Washington have been seen by Beijing as U.S. support for Taiwan’s independence movement.

“If anyone wants to separate Taiwan from the country, the Chinese military will resolutely defend the unity of our motherland at all costs,” Shao added.

The U.S. using Taiwan as a card is a new factor in the dynamic of the trilateral relationship that “really did not exist” before President Donald Trump came into power, said Bonnie Glaser, senior advisor for Asia at Washington-based think tank Center for Strategic and International Studies (CSIS).

“Trump is a transactional president and he often seems to be willing to put anything on the table,” she told CNBC.

On the military front, the Trump administration has ramped up arms sales to Taipei over the years, invoking the ire of Beijing. Washington is reportedly preparing a sale of more than $2 billion worth of tanks and weapons to Taiwan.

Diplomatic issues have also come to the fore. In May, high-level security officials from the U.S. and Taiwan met for the first time in nearly four decades, drawing an angry response from Beijing.

Chinese Foreign Minister Lu Kang said Beijing is “strongly dissatisfied” with and “resolutely opposed” to any official meetings between the U.S. and Taiwan.

Chinese President Xi Jinping arrives for an event to commemorate the 40th anniversary of the Message to Compatriots in Taiwan at the Great Hall of the People January 2, 2019 in Beijing, China.

Grossman told CNBC on email that his understanding is that such meetings “have been ongoing for some time in private.”

“My hunch is that it was publicized this time via intentional leak from one or both sides to signal to China that the upgrade in U.S.-Taiwan relations is here to stay,” he added.

Taiwan’s next leader is key

Taiwan is set to have its presidential elections in January 2020 — and experts said the polls would likely determine the direction of cross-strait ties.

Grossman said that if the incumbent Taiwanese president Tsai Ing-Wen is re-elected, which is “likely,” cross-strait tensions are likely to escalate further from 2020 to 2024.

Glaser from CSIS echoed that sentiment, adding that if a candidate from the independence-leaning Democratic Progressive Party was elected, China would ratchet up military, diplomatic and economic pressure.

“I think the Chinese would be worried that there’s always this potential for things to go in a very negative direction because the combination of Trump being president and the possibility that Tsai gets re-elected … could really embolden Tsai to move toward the direction of independence,” she added.

China could miscalculate and think the United States would get involved in a conflict, and that would really be a very dangerous situation.

According to Grossman, the best hope for keeping tensions under wraps would be if a candidate from the opposition Kuomintang (KMT) party wins the next Taiwan presidential race and recognizes the “One China” policy.

That said, Grossman added, public opinion polling in Taiwan has shown that voters will not likely support the opposition KMT in doing so.

“The Taiwanese have been observing how China’s ‘One Country, Two Systems’ approach has worked out in Hong Kong, and it isn’t too inspiring,” Grossman added.

A public opinion survey conducted by the Taiwan’s Mainland Affairs Council in May also found that 83.6% of Taiwan opposes Xi’s “one country, two systems” policy.

A ‘small’ risk of escalation

Asked if an armed conflict was a possibility, Grossman said: “Absolutely a risk — albeit a small one.”

However, he emphasized that he did not want to get anyone alarmed, and highlighted that “those out there saying the risk is very high are probably wrong.”

“I would say the risk has escalated under Tsai from maybe a 1% to 5% chance of armed conflict,” Grossman added. “But that’s still uncomfortably high considering that China has nuclear weapons and the U.S., also with nukes, would likely intervene to save Taiwan were China to invade or attack the island.”

Similarly, Bucknell’s Zhu said that while the possibility of an escalation is always present, in reality, “neither side wants to face military confrontation.”

However, he added, economic and diplomatic confrontations are “highly likely.”

That may come in the form of Beijing poaching the island’s allies to ramp up pressure on Taiwan as cross-strait tensions escalate, he said. “Economically, Taiwan is heavily dependent on the mainland market, so China could restrict Taiwan’s agricultural exports to the mainland.”

Washington should “carefully deliberate” its exchanges with Taiwan and ensure the wrong signals are not sent to Beijing, Glaser from CSIS pointed out.

“China could miscalculate and think the United States would get involved in a conflict, and that would really be a very dangerous situation,” she added.

Tue Jun 11 , 2019
Image 1 of 2 ▼ A driver waits in front of an electronic stock board of a securities firm in Tokyo, Tuesday, June 11, 2019. Asian shares are mostly higher as investor jitters over trade eased after U.S. President Donald Trump suspended plans to impose tariffs on Mexican imports and […] 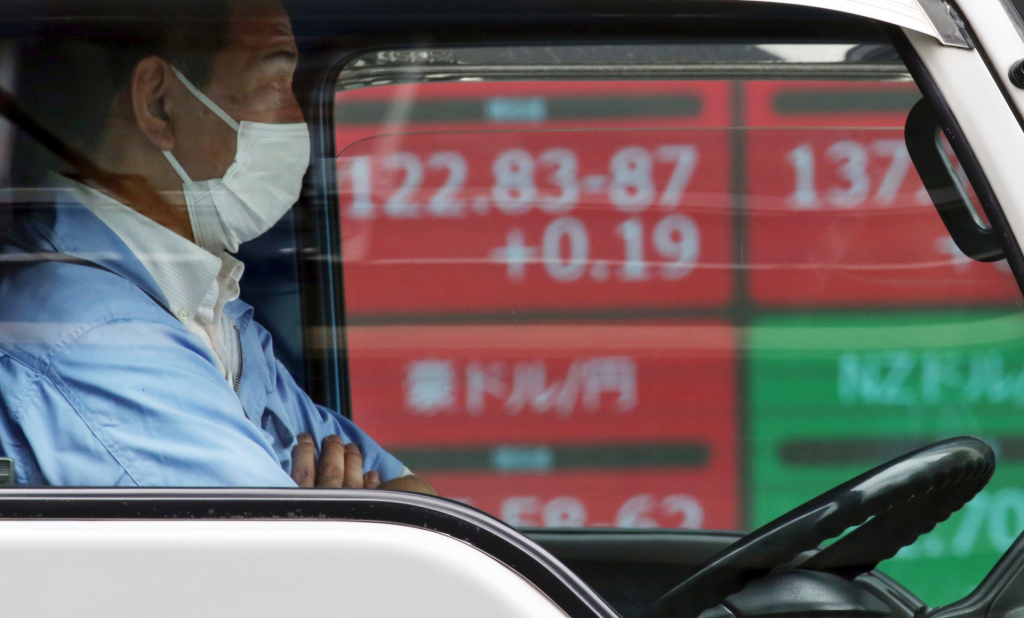