But as the protests gain traction — both at home and abroad — there are growing concerns about the state’s response to the movement and what all of this could mean for the country’s economy.

The government is under growing pressure to deliver reforms amid the mass civil unrest, but analysts are concerned that the planned fiscally conservative policies, which may have aided the economic recovery, will become increasingly difficult to implement.

What’s more, the heavy-handed nature of the government’s response to protests has damaged its standing both domestically and internationally, heightening political uncertainty as the country looks to emerge from the crisis.

Africa’s largest economy remains heavily dependent on oil, which constitutes around 80% of its exports, 50% of government revenue and 30% of banking credit, according to the World Bank.

He suggested that, as the civil unrest shows few signs of abating, some of the government’s planned policies — which were designed to bolster the economy — could be reversed in an effort to avoid further opposition.

The Lagos Panel Of Inquiry Visits Lekki Toll Gate on October 30, 2020, scene for inspection and to make more findings concerning the shooting which occurred on October 20, 2020.

“This now raises the likelihood that we could see a reversal in positive policy shifts such as the decision to deregulate fuel prices – the government has already started backtracking on electricity price hikes,” de Hart said.

“Regrettably, many of these reforms should have been implemented at a much earlier stage, along with pro-business policies to drive diversification and growth.”

The social media-fueled #EndSARS protest movement is taking place against the backdrop of the country’s worst economic recession in over 30 years, with inflation rising above 13% and GDP (gross domestic product) contracting by 6.1% in the second quarter.

As such, the hit to the oil sector, combined with the economic disruption from the pandemic and falling remittance payments from abroad, is expected further constrain the government’s ability to deliver social programs and address the grievances of protesters, exacerbating tensions.

What is driving protests?

The SARS, accused of decades of brutality, rape and torture, was dissolved on October 11, but protesters have continued to demand broader fundamental reforms. In recent weeks, the demonstrations have descended into violence, coming to a head on October 20, when soldiers allegedly used live ammunition to disperse peaceful protesters at the Lekki toll gate in Lagos, Nigeria’s largest city.

Amnesty International says at least 12 protesters were killed and Lagos Governor Babajide Sanwo-Olu said 25 people were injured, claims the army has dismissed as “fake news.” The incident unleashed a wave of violence and vandalism in Lagos and elsewhere, although protests have since dwindled in Lagos.

Activists protesting police brutality by the Nigerian Special Anti-Robbery Squad (SARS) demonstrate in Parliament Square in London, England, on October 21, 2020. SARS has been accused of extrajudicial killings, extortion and torture, prompting demonstrations across Nigeria that have seen at least 56 people killed by Nigerian security forces in recent weeks, according to human rights group Amnesty International.

Meanwhile, pro-government demonstrations elsewhere in Nigeria have underscored a deep north-south divide and have heightened the risk of worsening violence in the oil-producing Niger Delta region. Supporters in the largely Muslim north, from where President Muhammadu Buhari hails, have accused protesters from the largely Christian south of trying to sow chaos to discredit the administration.

Following global condemnation of the government’s response to the protests, Buhari urged the international community and public figures to “seek to know all the facts” before “rushing to judgment.”

Buhari has also sought to highlight concessions the government has already made and suggest that protests were being hijacked by “subversive elements” to “cause chaos,” while opting to project an overall image of strength and deploy military personnel to key areas.

According to a report published last week by political risk consultancy EXX Africa, there are a number of distinct groups involved in the unrest. The first comprises young, educated and progressive reform advocates, many of whom have a strong social media presence. This part of the #EndSARS movement has been able to gain global traction and elicit endorsements from celebrities, political figures and even Twitter CEO Jack Dorsey.

A second, larger group comprises less educated and often unemployed youths lashing out at economic hardship, while a third, smaller section consists of “hardened criminals,” according to the report. On top of this, government supporters have been carrying out attacks along sectarian and ethnic lines.

A key economic risk, according to EXX Africa, is the potential for disruption to commercial assets.

Protesters take a knee to honour the lives of those lost to the police brutality happening in the country at the Murtala Muhammed airport tollgate, during ongoing protest against the unjust brutality of The Nigerian Police Force Unit, the Special Anti-Robbery Squad (SARS), at Obafemi Awolowo way, Ikeja, Lagos on October 19, 2020.

“Assets that are most exposed to opportunistic attacks include cargo in-transit, commercial stores and stationery vehicles. Targeted attacks are largely driven by political, sectarian or ethnic motives,” the EXX Africa report said.

NKC Political Analyst Louw Nel suggested that although Buhari may have an understandable grievance with the international scrutiny of the situation, compared to similar unrest across the continent, he will need to moderate the government response.

“Whatever the case may be, there is a desperate need for the Buhari administration – and governments elsewhere on the continent – to recognize the limits of responding to protests over state brutality with more state brutality,” Nel said in a research note.

“We expect protests will continue, and further repression, or another Lekki toll gate tragedy, will only fan the flames and weaken Mr. Buhari politically.”

Mon Nov 2 , 2020
FILE PHOTO: An empty bus is driven through the quiet streets outside the Bank of England in the early hours, as the city is deserted at night like never before, while the coronavirus disease (COVID-19) lockdown continues, in London, Britain April 22, 2020. REUTERS/Dylan Martinez November 2, 2020 LONDON (Reuters) […] 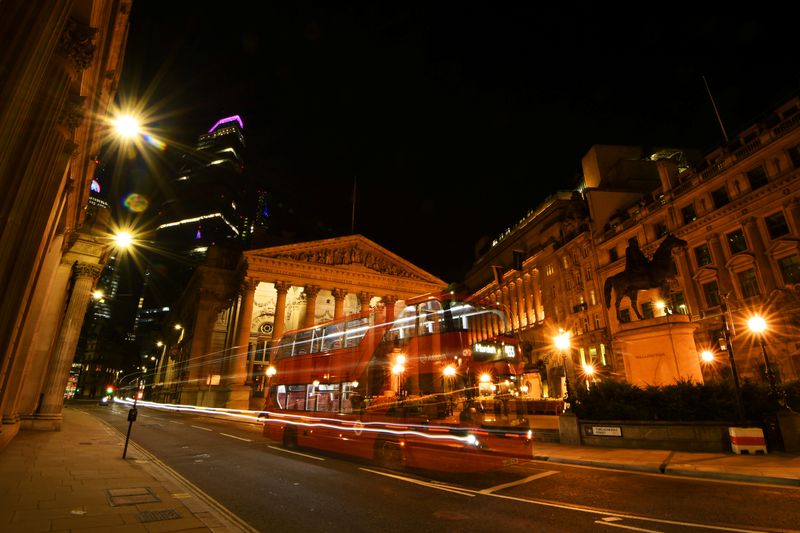