A Chinese customer looks at a phone at the official opening of the new Apple Store in the Sanlitun shopping area on July 17, 2020 in Beijing, China.

Shares of Apple soared 6.35% on Monday, as investors looked ahead to the company’s product launch that’s expected to reveal new iPhones.

It marks the biggest gains for the company since July 31, when Apple’s stock closed up 10.47% after reporting a blowout quarter.

Apple is expected on Tuesday to reveal the first major redesign of the iPhone’s exterior since 2017. The company is also likely to release four separate iPhones at different screen sizes and prices, marking a wider range for the company than typical. It’s also expected to release iPhones that support 5G cellular networks, which promise faster download times.

“We expect this fall’s launch to be the most significant iPhone event in years,” Morgan Stanley analyst Katy Huberty wrote in a note this week. Huberty is forecasting Apple to ship about 220 million iPhones in its fiscal 2021, which would be up 22% year over year, according to the Morgan Stanley model.

Many iPhone owners are also likely due for an upgrade, according to Wedbush Securities.

“With our estimation that 350 million of 950 million iPhones worldwide are currently in the window of an upgrade opportunity, we believe this will translate into an unprecedented upgrade cycle for Cook & Co,” the analysts wrote.

Wall Street could also be using history as a gauge ahead of Tuesday’s event. Apple stock has a long history of outperforming in the months following the release of its new iPhones.

The company’s shares have outperformed the S&P 500 by an average of 13 percentage points in the six months after an iPhone launch event, according to data compiled by Morgan Stanley. Hedge fund analytics tool Kensho data shows Apple shares are down on average for the day and week of a media event, but the stock bounces back. On average, Apple’s stock is 10.7% higher three months after the event.

Overall, Apple stock is up almost 70% year to date.

— CNBC’s Kif Leswing and Maggie Fitzgerald contributed to this report.

Mon Oct 12 , 2020
U.S. President Donald Trump, with bandages seen on his hand, takes off his face mask as he comes out on a White House balcony to speak to supporters gathered on the South Lawn in Washington, October 10, 2020. Tom Brenner | Reuters President Donald Trump has tested negative for the […] 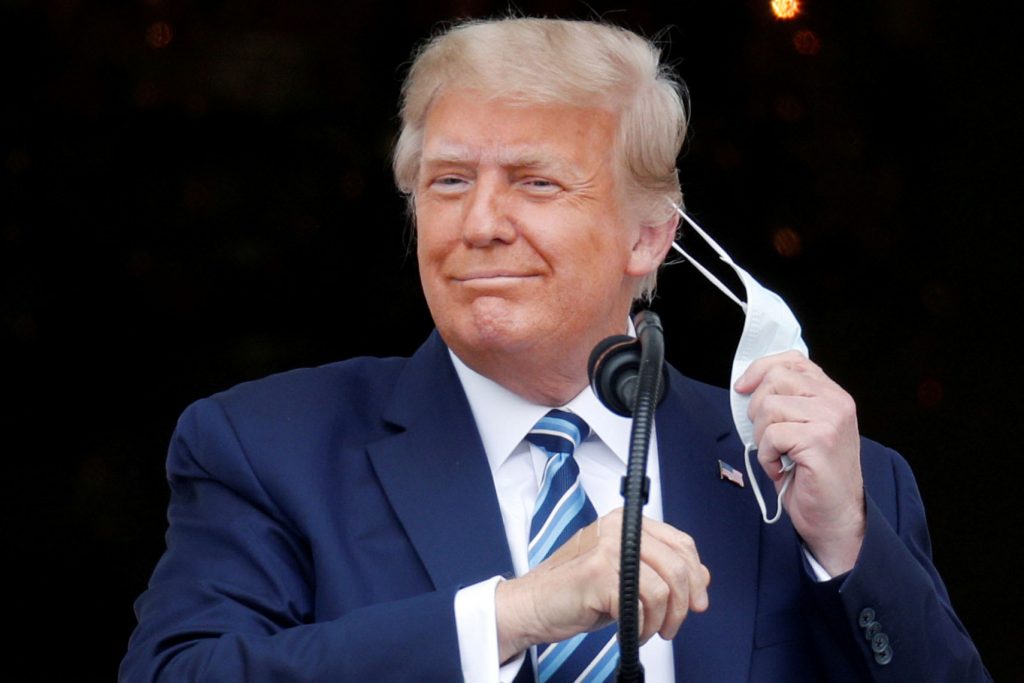