FILE PHOTO: A man wears a protective mask as he walks past the New York Stock Exchange on the corner of Wall and Broad streets during the coronavirus outbreak in New York City, New York, U.S., March 13, 2020. REUTERS/Lucas Jackson

(Reuters) – U.S. stock market futures struggled for direction amid some wild swings while longer dated Treasury yields buckled on Wednesday as results from the U.S. presidential election proved far closer than expected and investors geared up for extended uncertainty.

Early in the count, betting markets flipped from having for months assumed a win for Democrat challenger Joe Biden to suddenly price a high probability President Donald Trump would keep the White House. But as votes continue to stream in they have jumped back sharply in favour of Biden in recent hours and many investors still think it’s still too close to call.

There are many doubts about whether the Demcrats can now take the Senate from Republicans, undermining pre-election betting that a Democratic ‘clean sweep’ of the Presidency and Congress was likely – complicating the likely passage of a big fiscal stimulus package after the result and other Democrat policy initiatives. Counting to get a final result could take days at least.

“Vote tallies in key Senate races are consistent with no overall Democrat control even in the event that Biden wins the Presidency. As such the abolition of the filibuster, feared by tech investors wary of the prospect of regulatory hardening looks less likely. The prospect of a very substantial fiscal package that would boost nominal GDP – raising demand for goods and services, dampening deflationary fears and pushing bond yields higher – looks lower with a split Congress. As such, initial market reactions that have seen bond yields fall and quality growth equities retaining their leadership look reasonable.”

“A continuation of the status quo has become much more likely. So, in particular, no withdrawal of Trump’s tax reform. But it would also mean that timely adoption of a comprehensive stimulus package has become less likely. If Trump remains in office, smouldering conflicts, for example with China, are likely to become more acute.

“It is still far too early for a final assessment, and we would not put too much emphasis on early market reactions. Investors will probably not get a clear picture of the new administration’s priorities, what it wants to do and is able to do, until the first half of 2021.”

“In a divided-power scenario or a contested outcome, the rising volatility should push appetite for the US dollar higher in the short term, while expectations for higher deficit should recede sharply. Investors’ focus should shift back to the Covid-19 situation in Europe and its impact on growth. On EM the dollar trend is key: a weaker dollar is supportive for EM assets. On China, the tough rhetoric will likely remain, whatever the scenario.

“The great rotation towards the Biden trade – including the value cyclical equity rotation and the steepening of the US curve – is now on hold. Overall we remain cautious and balanced.”

“As things stand, the senate will probably not go to Democrats and this has repercussions, regardless of who wins, on what fiscal stimulus can be agreed. If the Democrats control the House and the Republicans end up controlling the Senate, it’s quite likely that any big spending programmes will be difficult to go ahead.

“This could go on for several days, creating continued uncertainty, and as we know markets hate uncertainty. We have seen credit sell off as expected and risk free assets such as U.S. Treasures and U.K. Gilts do well as a knee-jerk reaction from investors who are looking to buy safe assets. Our European funds are positioned long duration with significant positions in U.K. Gilts, German Bunds and French Oats. This should benefit portfolios in times of volatility.”

“Markets appear to have leapt too quickly to assume another Trump upset, but it is still too early to call. This leaves us in ‘election limbo’ awaiting the result and the longer it drags on the more likely we are to go towards a contested election. We think this suggests more risk aversion and a pick-up in volatility, we are already seeing the former, but not the latter. Riskier currencies are underperforming and the USD and US Treasuries have rallied and we think there is more of that ahead.”

“There is clearly a tighter race than expected on the presidential level, and also in congress. One of the early takes is that the Blue Wave is out of the way – that is pretty clear. The potential read through already from that in terms of the fiscal policy outlook – which will be differently shaped – will also be smaller, that will be almost a certainty. In terms of market impact, what seems to be the most significant so far is the rally in U.S. Treasuries. Those two come closely together, because this is one of the few close-to-certainties that we have.”

“The most important driver there is Republicans holding onto the senate, thereby the fiscal package of three trillion will not be coming through and in the composition of the package, it will be less focussed on state aid or infrastructure spending and more focussed on corporate tax cuts. I don’t expect any comments tonight, but with less fiscal stimulus the Fed will have to remain more dovish for longer and again, weighing on yields.”

“Frankly, I wouldn’t be investing in any political polling companies anytime soon – I doubt anyone will be paying much attention to those again.”

“We expect quite a lot of market volatility. However, the core investment conditions that we see for the next 12 months won’t be reversed by this volatility. The monetary and fiscal stimulus that we’ve seen so far to counter the pandemic is yet to work its way fully through the system, and we expect that it will be one of the big influences on investment conditions in the next 12 months.

“From an investment perspective high quality equities and staples are expected to do better. While areas like healthcare may still do well, particularly if Congress is likely to be split and there is a need for a lot of consensus building before more radical policies take root, we should avoid outright bets, for example, on renewables or the oil and gas sector.”

“Markets are now leaning towards a potential Trump win and within that context, the moves we are seeing make sense. Before the election, there had been what we call Biden trades going through, especially in regulatory-focused sectors, and those are now being unwound.

“If it looks like fiscal stimulus – which was the base case in a Blue Wave scenario – doesn’t materialise, potentially this will move into a risk for the market. So the most important anchor point will be the configuration of Congress and that’s where we have more clarity, in that we have a potentially much closer result in the Senate as well.”

“From the point of view of equity markets a divided Congress at this point is the least desirable scenario, independently from which side wins, as this could mean delays in policy execution and in what we believe is a much needed stimulus package in the near term.

“There are two equity trades here: in the short-term, until uncertainty on the outcome (subsides), we can expect investors to turn more defensive and some of those “Blue sweep” trades that we have seen arising since the summer and even more so over the last few days are likely to unravel: EM equities and FX, including China, the renewables theme (on expectation that a Biden administration would favour more environmentally friendly policies), and cyclicals over big tech.”

“It’s far too close to call, but right now it is clear that the Democrat landslide suggested by polling is just not materialising. For now, it very much looks that whoever wins the White House, we face a divided Congress.

“This has far-reaching implications for markets, mostly because it means that any kind of pandemic recovery package is still tough to approve. Our portfolios are well balanced to withstand the volatility ahead, and in the very short term we are going to keep some powder dry and reduce our exposure to high-yield credit so that we have a little more cash to deploy once this election is settled.”

“We may be entering a scenario similar to the 2000 election, where the final vote tabulations may be contested and where there may be numerous legal actions at the local, state and Federal levels.

“This may have numerous unforeseen consequences for markets over the coming weeks. Accordingly, volatility is likely to remain high.”

“A dark blue wave with (Sen. Bernie) Sanders as labour secretary that would have been very painful for markets. The probability of that is now low, so that means we can start to think beyond this short-term movement and over the mid term, there’s some good news behind that – what you will be getting either way will be stimulus.

“The size of the envelope and the focus will vary on who is the future president but either way I see 10-year U.S. Treasuries grinding higher to around 1% either way – a bit higher if Biden wins.”

“This seems like another shock-and-awe outcome once again. The presidential race is looking far tighter than that projected Blue Wave scenario that has really kind of dominated the headlines in recent weeks.”

Wed Nov 4 , 2020
Democrats’ dreams of winning back the majority in the Senate appeared to be slipping out of reach early Wednesday as they had not netted any new seats. But there was still hope, with several key races left to be called and the potential for a pickup in Arizona. By early […] 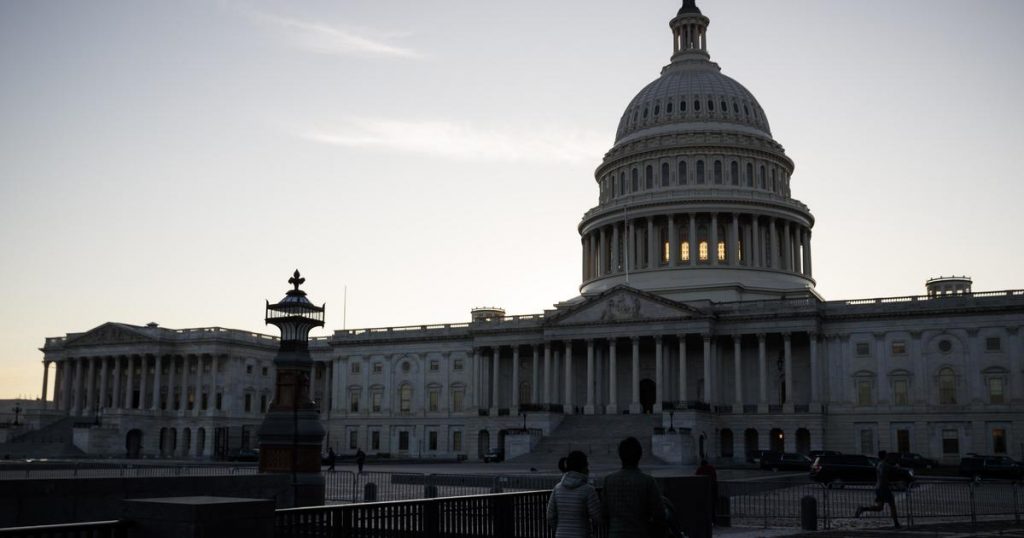