What if you have a good job, but you know there’s something else you should be doing with your life?

At 14, Mike Lewis was growing up in California, dreaming of playing squash professionally. Ten years later, however, he was working in finance at Bain Capital. It was there that he realized the “voice in my head was never going away”—and it was telling him to become a professional athlete.

“The squash tour is not well known, but you can circle the globe playing it. And I thought at some point, ‘I’m going to do this,'” the author told CNBC’s On The Money in an interview recently.

“The trouble is there’s no knock at the door, no one’s going to come in and say, now you can go chase your dream,” he added, so he decided to “reach out to other people who had left something comfortable to go do what they cared about.”

After finding and talking to others who took a professional risk for a personal reward, he made his own jump: He quit his job and successfully played 18 months internationally on the squash circuit.

During that time, Lewis tells CNBC he kept finding and compiling stories “from every type of person, single parents to millennials to immigrants to baby boomers.” The result is his new book “When to Jump: If the Job You Have Isn’t the Life You Want.”

One thing everyone who “jumps” has is common, Lewis said, is “there was a lot of planning. You don’t just wake up one day and start a company. It’s a lot of hard work and what I call the 10,000 un-sexy steps.”

Some other “jumps” in the book include Dan Kanary, a bank loan officer who co-founded Harpoon Brewery; and Greg Klassen, a former forklift operator who now designs luxury furniture.

“I think everyone has a story and a jump might look different for me than it is to you. And I think giving people permission to say ‘this is going to be scary, but it’s really worth doing.'”

Lewis acknowledged the time isn’t always right to make such a radical move, and the move itself isn’t for everyone.

“I don’t believe that if you have kids and a mortgage or student debts to pay back today is the time to jump,” Lewis said. “But that doesn’t mean you can’t jump in a year or two years. And we go through that in the book of how…you get closer to when that time comes, you’re ready to go.

And if you do decide to “jump”, Lewis advised not looking back.

“This is the time to take chances when you feel like you’ve prepared,” he told CNBC. “And when you do, you can’t look around or behind or in front of you and say what could have been, because you only get one shot at this.”

On the Money airs on CNBC Saturday at 5:30 am ET, or check listings for air times in local markets.

Sun Jan 14 , 2018
Last Updated Jan 14, 2018 9:29 AM EST ISTANBUL — A commercial airplane that skidded off a runway after landing in northern Turkey dangled precariously off a muddy cliff with its nose only a few feet from the sea.  Images show the Boeing 737-800 on its belly and at an […] 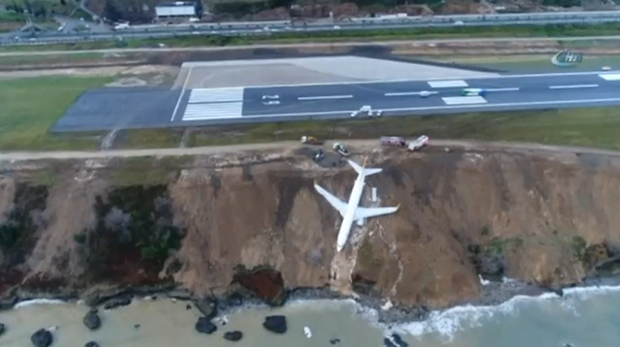